Asheville, NC has long attracted tourists and lovers of the outdoors because of its position in the Blue Ridge Mountains and alongside the French Broad River. Ask nearly any non-native Ashevillian how they found the place, and they’ll likely say they came for a visit and fell in love.

Before you pack up your tiny home and root it here in the AVL, there are a few things you should know.

1. Natives might take time to warm up to you.

Don’t take it too personally, but natives are intensely skeptical of transplants. People who were born and raised here are fiercely loyal to and about their hometown. They appreciate its diversity, the laid-back mountain culture, and its natural beauty. Natives also love the independent spirit of the city which breeds a wide DIY sensibility.

2. We are intensely local.

Independent businesses thrive in Asheville. In fact, larger chain restaurants, grocery, and retail stores don’t fare as well as those that are locally owned. In fact, there is a large “Shop Small” movement here known as Asheville Grown, which encourages residents to “Love Asheville. Keep It Local.”

With upwards of 30 craft breweries (that number is always changing), including the Southeastern headquarters of both Sierra Nevada and New Belgium breweries, Asheville is heaven for beer lovers and connoisseurs.

Asheville is also a hotbed of locally owned restaurants, and is often called a “foodie paradise”. The Zagat restaurant guide rated it Number 30 on its list of The 30 Most Exciting Food Cities in America in 2017. There are 700 or so restaurants in the city, with delicacies ranging from Thai to Ethiopian to French to Southern cuisine, and everything in between.

Since Asheville keeps growing, the traffic is growing with it. The population of the city is around 90,000, which makes it the 12th most populous city in North Carolina. Sometimes it seems like all of those people are on the road at the same time.

This tweet brought to you by the Official Car of Asheville, Subaru Outback: pic.twitter.com/VrSlinRb3p

Although it might just be a stereotype, a lot of Subarus are on the crowded roads of Asheville. Long hailed for their ability to traverse rough terrain while maintaining environmentally friendly gas standards, Subarus – with lots of political stickers – are the autos of choice around here. 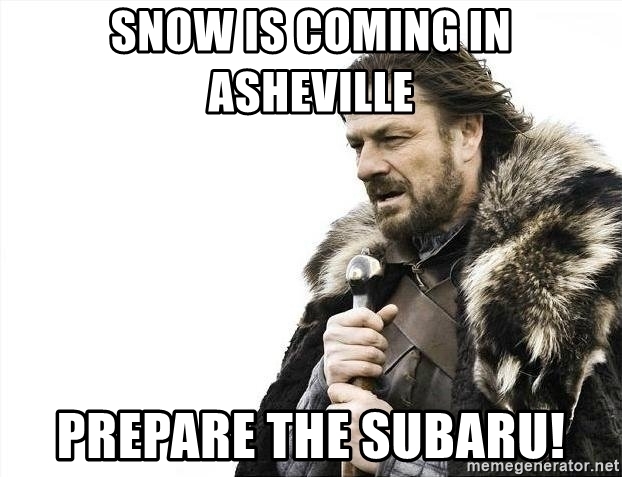 Although Asheville doesn’t get a lot of snow – usually around 12 inches or so per year – when the white stuff does fall, residents go into panic mode. Almost as quickly as a meteorologist announces an incoming snow event, grocery stores are wiped out of all bread and milk. Be prepared for schools to close, and don’t make plans to go out of the house if more than two or three inches cover the ground.

8. The LGBTQ+ community is legendary.

Asheville is a liberal town, with 83 percent more gay and lesbian residents than the average American city. The Blue Ridge Pride Festival welcomes more than 10,000 people every October, and the first gay wedding in the state was performed in Asheville as soon as it became legal in 2015.

Most jobs are in the medical and education fields, as well as the service industry. The biggest employers are Mission Health System & Hospital, followed by the Buncombe County school district, but The Biltmore Company – the business end of the massive estate built for millionaire George Vanderbilt – has the service market cornered with its many hotels, shops, and restaurants.

… And cats, and goats, and chickens. Asheville is definitely a pet-friendly town. Most stores and restaurants with outdoor seating are happy to allow four-legged friends to enjoy the smells and sights of the city. Many storefronts downtown feature water bowls to keep furry creatures hydrated, some restaurants offer a menu for dogs, and Asheville is home to the first official Dog Welcome Center in the United States.

New hotels are popping up all over Asheville, to the ire of natives (see #1).

Because so many people want to live in Asheville, real estate is difficult to find. To meet the need, new apartment buildings are going up wherever land is available.

Since housing is so scarce, when homes do enter the market, they’re pretty expensive. The median home price is around $272,000, and expected to rise.

Although it’s easy to forget when you’re walking past a LaZoom tour bus filled with dudes dressed in drag, Asheville is still a southern town, which means inhabitants of the outskirts of the city still have traditional values and accents.

Asheville is so friendly, in fact, that there are two festivals each year celebrating the plant-based lifestyle: Asheville VegFest and Asheville VeganFest. There are numerous vegan and vegetarian restaurants in the ‘ville, and most restaurants offer options on their menus.

From mountain climbing or biking, to rafting, kayaking, or tubing, there is no reason to stay inside. Hike the Blue Ridge Parkway, go for a stroll in Carrier Park, or climb Mt. Pisgah. There’s no shortage of beauty or activity here.

The River Arts District is home to more than 25 studios featuring art from well over 200 artists. Even those who don’t enjoy frolicking in and out of shops will be lured in by the artistic graffiti murals along the industrial buildings on Riverside Drive.

Okay, maybe that’s an exaggeration, but celebrity sightings are a common occurrence in Ashvegas, and more than a few movies have been filmed here including The Hunger Games, Cold Mountain, Three Billboards Outside of Ebbing, MO and Last of the Mohicans.

Biltmore Estate is the largest private home in America, and well worth a tour. If nothing else, check out its amazing grounds and landscaping.

Forbes magazine called Asheville one of the 15 Coolest Places to Go in 2018. So, what are you waiting for?

Moving to Asheville soon? Find a cheap place to stash your stuff while you house hunt.

Michelle is a freelance writer based in Asheville, NC.
Twitter 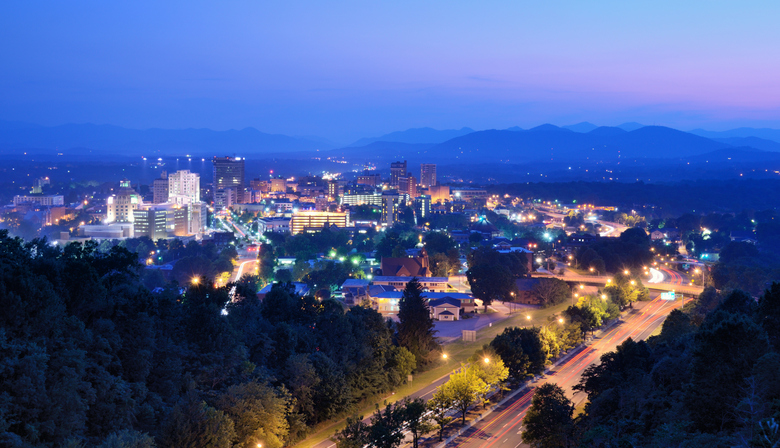 When people think of Asheville, they typically picture the bohemian downtown surrounded by the picturesque backdrop of the Blue Ridge Mountains. But there is much more to Asheville than that. In fact, neighborhoods make up…

END_OF_DOCUMENT_TOKEN_TO_BE_REPLACED 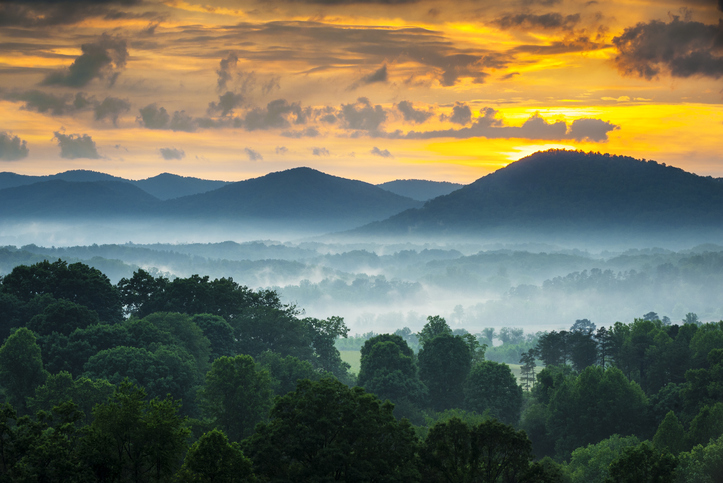 How to Sound Like a Local When You Move to Asheville

Asheville natives are notoriously unhappy with the hordes of transplants and visitors who flock to their beloved city. If you’re new to the city, or just in town for a few days, one surefire way…

END_OF_DOCUMENT_TOKEN_TO_BE_REPLACED 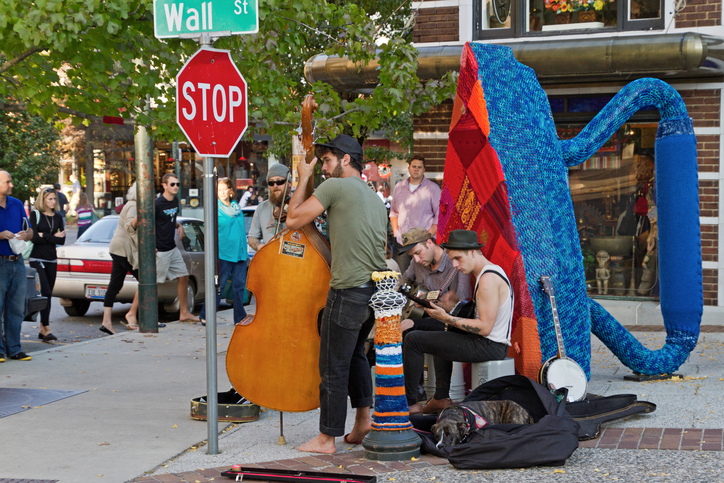 20 Things You Need to Know Before Moving to Asheville, NC

Asheville, NC has long attracted tourists and lovers of the outdoors because of its position in the Blue Ridge Mountains and alongside the French Broad River. Ask nearly any non-native Ashevillian how they found the…

END_OF_DOCUMENT_TOKEN_TO_BE_REPLACED 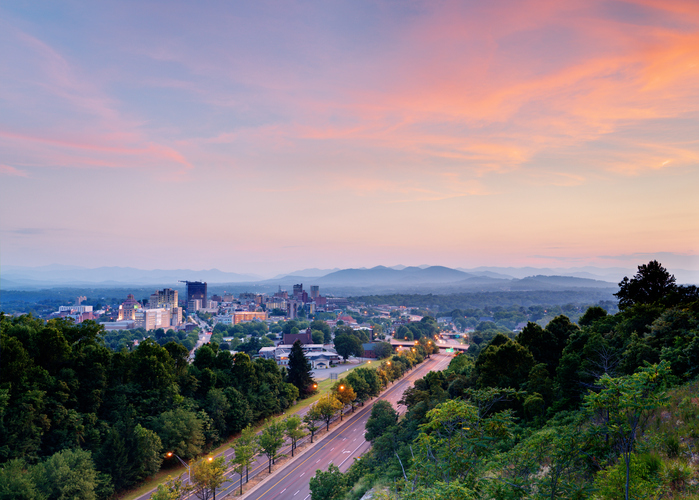 Where Everybody in Asheville is Moving From

Even if you’ve never visited Asheville, N.C., you’ve almost certainly seen parts of it or its environs. That’s because a slew of movies, including award winner “Three Billboards Outside Ebbing, Missouri,” “Dirty Dancing,” “The Fugitive,”…