You’re not a true Chicagoan until you’ve survived your first winter in the Windy City—because that’s when you truly realize that the city’s most famous nickname doesn’t quite tell the whole story.

You see, Chicago isn’t merely windy. It’s also frequently freezing, covered in sludge and filled with seasonally depressed recluses for a large chunk of the year.

Yes, Chicago winters can be every bit as bad as you’re expecting. But hey, they build character. And if you get can through a few months of misery, you emerge feeling victorious, accomplished and really freakin’ excited to drink on all the patios come warmer months.

Here’s what you need to know if you’re going to make it through a Chi-town winter.

There are two kinds of winter in Chicago: One is the kind you’ve likely heard a lot about. It’s cold, it’s snowy, schools are closed, people would rather slice off their arms than leave the house, the roads are straight up treacherous.

But, then there’s the less-discussed variety: The mild Chicago winter that’ll even throw you an errant 65-degree day or two in the middle of January.

To put it into perspective: Chicago’s total annual snowfall was in the single digits in the winter of 1920-1921…but the area saw a whopping 80-plus inches a few years ago. How do you know what you’re going to get? You don’t. You just prepare for anything. Which brings us to our next point…

You should have a no-nonsense puffy coat at your disposal by early October.

You probably won’t use it until later in the season, sure—but the cold creeps up on you, and temps could very well plummet unseasonably early. To get an idea of how wacky Chicago weather can be, consider this: It snowed on Halloween in 2014. No, not Christmas. HALLOWEEN.

Have that coat ready to go—and set your vanity aside. The right kind of coat is the one that’ll keep you safe, well and warm…and if it’s a big, basic puffer, well….it beats frostbite. The same goes for footwear: Practical snow boots are an absolute must, and sadly, they’re something you should NOT plan on buying during Black Friday sales.

Stash some essentials in your car

If you’re one of the unlucky ones stuck on Lake Shore Drive during a Chicago blizzard, be prepared to spend lots of time sitting in your car. Access to snacks, a bottle of water and a thick blanket will make the wait more bearable.

Get ready to hibernate

While there are always a few brave souls who won’t let a little thing like awful weather get in the way of their partying, many Chicagoans aren’t quite as committed to the cause. Be prepared to feel a little friendless during the cold months…that is, unless you count your food delivery apps and your couch as friends.

The best way to get through a Chicago winter? Get away from it….even if just for a few days.

Plan a warm weather vacation for yourself sometime between late January and early March. If the winter proceeds as expected (which, to be honest, it probably won’t), this is about the time you’ll reach your wit’s end. Have that trip planned by November and dream about it when you’re stuck inside on a Saturday night, eating your fifth delivery pizza of the week.

We can basically assure you that no vacation will ever feel as well-deserved as the one you take towards the end of your first Chicago winter. 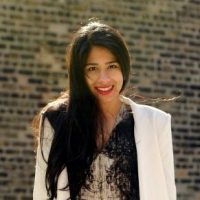