The Motor City has had its fair share of ups and downs over the years. From it’s days as a fur-focused European settlement, to it’s time in the sun as the global leader in automobile production, and ultimately, to the decline of auto industry jobs that led to a population decline. But Detroit is currently having a resurgence as residents from pricey cities seek out a more affordable cost of living. 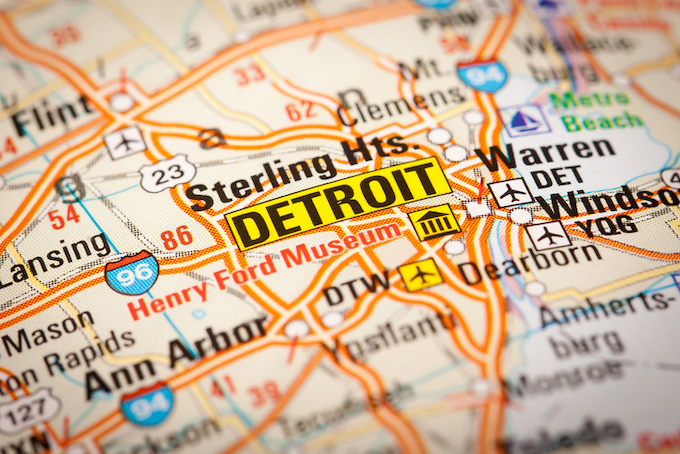 The largest city in the state of Michigan has plenty to offer in terms of culture and entertainment. Here are a few of Detroit’s most notable neighborhoods and what they are known for:

Detroit at a Glance

It’s true—a lot of people have moved away from Detroit due to the automation of the auto-industry, but new residents are moving into the city every day. Here are some stats to let you know where the city currently stands.

20 Things to Know Before Moving to Detroit

A lot of people outside Detroit, MI, have a lot to say about what it’s like here. And while some sources might make it seem like Detroit is part war zone, part hipster metropolis, there’s a lot of surprising and wonderful things about our city. Here are 20 things you should know before moving to Detroit.

“South Detroit” isn’t really a neighborhood. The area south of downtown Detroit is a place called Canada. You still can sing “Don’t Stop Believing” as much as you want. Just be mindful that the city boy, born and raised in south Detroit, probably was born in Windsor, Ontario.

2. Detroit is a music haven.

Detroit is not only the home of Motown, but it’s also the birthplace of a lot of great electronic music. In fact, the Movement Electronic Music Festival draws more than 100,000 fans to Detroit’s Hart Plaza each year. But that’s not all we have. With annual music festivals like Downtown Hoedown, Detroit Jazz Festival, Dally in the Alley and Charivari Detroit, Detroit’s music scene is sure to satisfy every taste.

3. We root for the home teams. We love our pro sports teams. We root for the Lions (football), who don’t have the best track record, and the Pistons (basketball), who play in suburban Auburn Hills. And let’s not forget the Red Wings (hockey). Opening day for the Tigers (baseball) is basically a citywide event. If you’re working downtown on opening day, you’ll likely run into groups of people tailgating before 9 a.m. The whole city smells of hot dogs all day, but in an exciting, endearing way.

4. You’ll need to find something to like about winter.

Winter technically lasts from mid-December through mid-March. But in Michigan, the weather is notoriously unpredictable. Winter can range from October through April, give or take a month. It can be sunny and 60 degrees one week and snowing the next. Rather than spending half the year waiting for warmer weather, you might as well pick up a wintertime hobby.

5. Don’t expect your street to be plowed regularly. When it snows, the main streets tend to get a lot of attention, but the side streets can get a little neglected. You’ll probably want to keep a shovel in your car — and you should consider getting a Jeep or other four-wheel-drive vehicle.

6. Get ready to winterize that cute place you’re renting.

Your loft in that castle-like building is really cute, but get ready to shrink-wrap the windows as soon as the first snow hits. Houses in Detroit often are old and drafty, letting a lot of cold in, so you’ll save yourself a ton on heating bills by making the necessary adjustments.

7. Detroit is great for biking.

If you’re coming from a hillier city, you’ll appreciate how easy it is to bike around a flat city like Detroit. There are dozens of cycling events in the city that can be as competitive or as leisurely as you like. Every Monday night, hundreds of cyclists take a slow-paced tour of the city during Slow Roll, an event organized by Detroit Bike City.

8. You probably can get anything you need at Eastern Market. Eastern Market is an indoor and outdoor farmers market in Detroit that’s open year-round, and it’s a great place to get your weekly groceries. In the warmer months, Eastern Market is more like a party than a grocery store. The food trucks are out, the streets are filled with music, and the flower vendors fill the outdoor sheds. The market boasts hundreds of vendors every week, selling everything from produce and meats to plants and home goods.

9. Detroit has a rich history.

The City of Detroit’s saga makes for a good read. From indigenous peoples and their influence on French settlers, to Henry Ford’s assembly line and the decline in population, there’s plenty to learn about to better understand where Detroit has been, and where it’s going.

If you ask people from nearby suburbs where they’re from, they’ll most likely say “Detroit.” It might be because they don’t want to explain where Royal Oak is, or it might be that they just want to say they live in a big city. If you tell locals, “I’m from Detroit,” they’ll probably ask, “So where are you actually from?”

11. Detroiters are really nice if you show an interest in them. If you say “hi” to someone on the street, they’ll usually smile and say “hi” back. And after you say “hi” to that stranger, you can engage in a genuine conversation. Detroiters are nice like that.

12. Detroit is safe when it comes to natural disasters.

If you grew up watching movies like “Dante’s Peak,” “Volcano” or “The Day After Tomorrow,” you might have an exaggerated fear of natural disasters. But you can rest assured that you’ll be safe in Detroit; according to HomeownersInsurance.com, Detroit is one of the safest cities when it comes to Mother Nature.

With amazing architecture, dozens of art exhibits at any given time, lots of street art and an active music scene, Detroit has much to offer for those interested in art. Organizations like The Heidelberg Project show how art can benefit our community. Residents of Detroit even get free admission to the Detroit Institute of Arts.

14. Detroit is home to one of the world’s best bookstores. John K. King Used & Rare Books is a four-story spot that’s filled to the brim with literary treasures. Upon walking in the door, you’ll be provided a handwritten map that helps you navigate the different genres on each floor. It’s a mecca for book lovers.

15. Detroit has its own style of pizza.

There aren’t a lot of big cities that have their own style of pizza. Detroit pizza is basically a deep-dish square pizza with a thick, crispy crust. It’s pretty amazing.

Sometimes, after a night at the bar, you not only want but need a hearty Coney dog before heading home. Luckily, Detroit has a lot of Coney Island restaurants, and many of them are open 24 hours a day.

17. Belle Isle is one of the best city parks around.

Detroit might be considered a concrete jungle, but Belle Isle is an escape complete with a conservatory, playgrounds, covered picnic areas, an aquarium, a beach, and hike-and-bike trails.

The Midwest accent often is called “the lazy accent.” But ask Detroiters about their accent, and they’ll tell you they don’t have one.

19. Detroit is the “Motor City,” but we don’t have the best public transportation system.

We have a functioning bus system, but it’s not known for being the most reliable public transportation around. The M-1 Light Rail is in the works, and once completed, it will be Detroit’s first electric streetcar in 60 years.

20. It’s got the amenities without the fuss

All in all, Detroit has everything someone moving from expensive cities like San Francisco or New York is looking for, but the cost of living can’t be beat.

Everything You Need to Know Before Moving to Detroit

The Motor City has had its fair share of ups and downs over the years. From it’s days as a fur-focused European settlement, to it’s time in the sun as the global leader in automobile…

END_OF_DOCUMENT_TOKEN_TO_BE_REPLACED

The Detroit metro area was the tenth fastest-growing economy among the 20 largest US metros in 2016. In 2015, the Detroit-Warren-Dearborn, MI Metropolitan Statistical Area generated a gross GDP dollar value of $219 billion. In…

END_OF_DOCUMENT_TOKEN_TO_BE_REPLACED

Here’s How Many Houses You Could Buy in Detroit

Detroit was one of the hardest hit housing markets during the last financial crisis, but the resilient Midwest metropolis is making a comeback. At the end of August, home prices in the Detroit metro area…

END_OF_DOCUMENT_TOKEN_TO_BE_REPLACED

Where New Residents of Detroit Are Moving From

Detroit is a city on the mend. After years of decay, the city is rebounding thanks to a rising wave of creatives and entrepreneurs that are seizing the opportunity to establish roots in “The D”….

END_OF_DOCUMENT_TOKEN_TO_BE_REPLACED

City of Detroit website Everything you need to know about living in Detroit. Chock full of useful resources, including information about the City of Detroit government, calendars of city meetings and events, important city terminology and more….

END_OF_DOCUMENT_TOKEN_TO_BE_REPLACED

A city embedded with over 300 years of history certainly has a few stories to tell. Founded in 1701 by French explorers, burgeoned by the fur trade in the 18th century, Detroit would later serve…

END_OF_DOCUMENT_TOKEN_TO_BE_REPLACED

As you rifle through years of accumulated “stuff,” surrounded by half unpacked boxes in your humble new abode, the odds are high you’re feeling pretty overwhelmed. Or maybe overwhelmed is putting it mildly—at this point,…

END_OF_DOCUMENT_TOKEN_TO_BE_REPLACED

That incredible job is waiting for you in Detroit or you’re finally moving back to the D after decades of lamenting for your old hometown—the only question that remains unanswered: how will you find the…