“Which absolutely gorgeous Honolulu neighborhood shall I live in?” you ponder. You have such problems!

Fortunately, we can help. Here are five of the nicest neighborhoods in Honolulu.

Kāhala is a small and very upscale neighborhood on O‘ahu’s southern shore that sits not far from Diamond Head crater. Its streets are wide and uncrowded and its extravagant, single-family homes are built on large lots. This neighborhood has some of the island’s priciest real estate.

Its two-story luxury estates sit on a gorgeous white sand beach where it’s usually sunny and warm. There’s easy access to the beach and the inviting, turquoise ocean. Tourists don’t usually visit these beaches, so there is a relaxed, uncrowded and easygoing feel to them.

The iconic Hawai‘i TV series Hawaii Five-O and Magnum P.I. – and, more recently, Lost – have filmed in Kāhala, and celebrities often stay at the elegant Kāhala Hotel & Resort. The hotel’s website boasts that Queen Elizabeth, the Dalai Lama and the Rolling Stones have stayed there, among many others.

There are three parks in Kāhala, including Wai‘alae Beach Park. The well-appointed Kāhala Mall has a Whole Foods.

Mānoa is a beautiful, lush valley where some resident families have lived in old, charming family homes for generations. The valley is known for its rainbows.

Although it’s only about three miles and 20 minutes away from downtown, it feels a bit “country,” tucked away as it is in a quiet, tropical area full of parks, hiking trails and almost-daily rainfall that keeps it green and pretty year-round. A popular hike at the back of the valley leads to Manoa Falls.

Roughly in the middle of the valley sits the Manoa Marketplace, a small shopping center with a Safeway and a drug store, as well as some restaurants, banks and other shops as well as a farmers market. There are several schools in the area, from the public Manoa and Noelani Elementary Schools, to the private Punahou School (K-12; former President Obama attended this school) and Mid-Pacific Institute (K-12). The University of Hawai‘i at Mānoa is here.

Mānoa Valley was the site of Hawai‘i’s first sugarcane and coffee plantations, which were brought in on the ship the HMS Blonde in 1825. It is also the site of the Hawaiian legend about Kahalaopuna, who was born to Kahaukani (the wind of Manoa) and Kauakuahine (the Manoa rain).

Hawaii Kai, on O‘ahu’s eastern side, is a well-laid out “master planned” community created by the industrialist, visionary and real estate magnate Henry J. Kaiser, starting in the 1960s, around the Maunalua fishpond and wetlands. Today it is a beautiful place to live, whether you’re in a marina-front house, an ocean-view home on the ridges, one of the elegant high-rise condos, a home on the golf course or any of the other single family homes and townhouses.

Beautiful Hanauma Crater, where visitors and residents snorkel and check out the tide pools, is in Hawai‘i Kai, as is Sandy Beach and the beautiful Koko Marina with its ocean sports such as sailing and paddling. Other popular beaches are Makapu‘u, Sherwoods and China Walls.

There are also good schools, shops, restaurants and just about every sort of water recreational activity. It’s a beautiful spot where thoughtful planning means sight lines have been maintained and there still great views of the ocean. 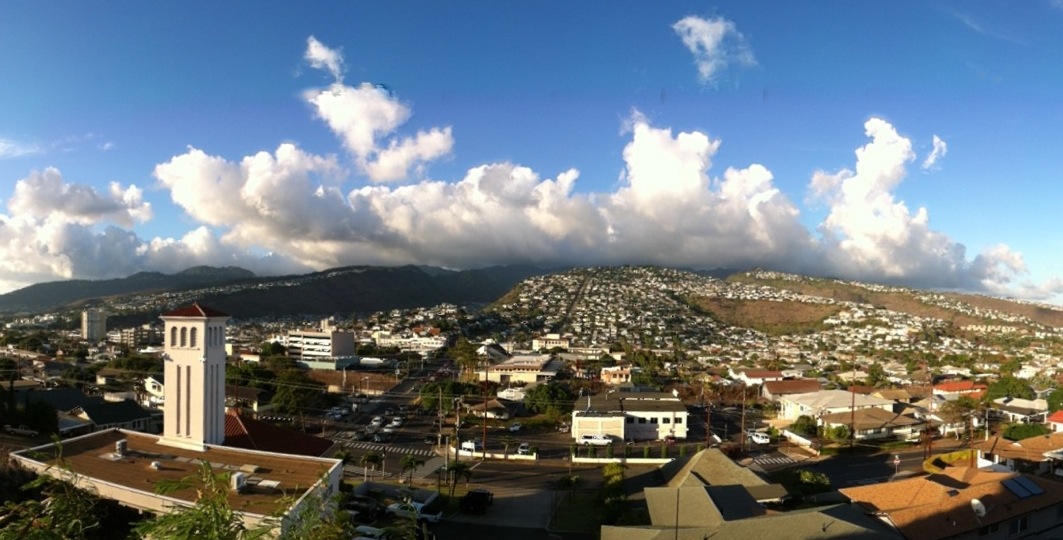 Back in the 1800s, Kaimukī was farmland belonging to the king, Kalākaua, who let ostriches roam wild over its mountainside. The town’s name, Kaimukī, comes from the Hawaiian words “ka imu kī,” or “the ti root oven.” The town used to be known for having ovens that baked ti roots into a sweet food that was like a candy.

Now Kaimukī is a quiet residential area that’s close to shopping and downtown but retains an older, quiet and laidback feeling. It’s been a residential neighborhood since the early 1900s and has lots of single-family homes, as well as some multi-family dwellings.

It’s a little bit eclectic, too, with a charm that comes from its old-style diners and one-of-a-kind shops. Kapi‘olani Community College has an excellent Farmers Market on Saturdays. You can find everything from dim sum at the Chinese restaurant Happy Days to delicious malassadas (Portuguese donuts) at legendary Leonard’s Bakery. Former first lady Michele Obama has eaten at Kaimukī’s trendy farm-to-table restaurant called, simply, Town.

The late Hawaiian musician Israel Kamakawiwo‘ole grew up in Kaimukī. 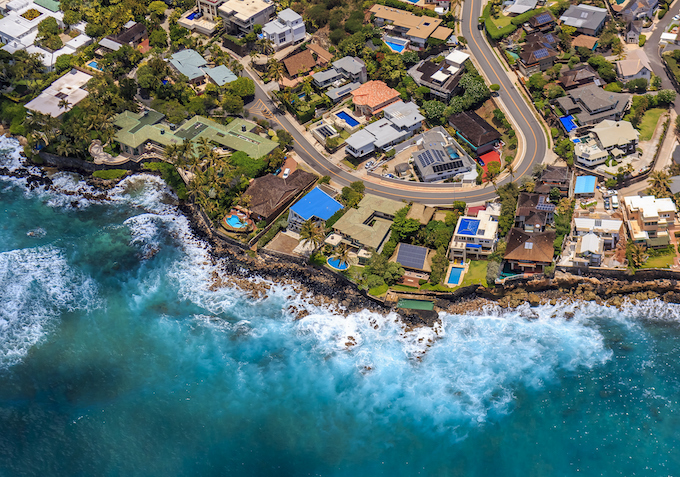 Waikiki, on O‘ahu’s south shore, is, of course, one of the world’s most iconic tourist attractions. And for good reason – the beautiful, oceanfront location is a multi-cultural, vibrant walking neighborhood surrounded by some of the world’s best shopping and hundreds of restaurants.

Waikiki is a densely populated neighborhood that’s about two miles long, maybe a half mile wide, and made up mostly of high-rise condo and apartment buildings. On one end, Waikiki is bordered by the 500-acre Kapi‘olani Park (home of the Honolulu Zoo and the Waikiki Shell, which has music concerts) and Diamond Head Crater. The Waikiki Aquarium is also in the area.

Historically, Hawaiian royalty had beach homes along Waikiki Beach and liked to surf there. Waikiki has always had a lovely, white-sand beach (although now it’s one of the most crowded beaches in the world). It’s still a great place to surf, as the surf is usually gentle, and you can rent a board and take lessons there.

Away from the ocean, most of Waikiki used to be marsh and wetlands. In fact, the name Waikiki means “spouting fresh water,” and refers to the springs and streams that used to flow there. In the 1920s, the Ala Wai Canal was dredged and the wetlands were filled, creating what became the Waikiki we know today.

Leslie is a freelance writer based in Honolulu.

Moving to Hawaii? Here’s What You Need to Know About False Alarms and Nuclear Attacks

I was home, still asleep, on that recent Saturday morning in Hawaii when an emergency alert sound came screeching out of my cell phone. I peered at it and saw the scariest message I’ve ever received: BALLISTIC…

END_OF_DOCUMENT_TOKEN_TO_BE_REPLACED

The 5 Best Neighborhoods in Honolulu

“Which absolutely gorgeous Honolulu neighborhood shall I live in?” you ponder. You have such problems! Fortunately, we can help. Here are five of the nicest neighborhoods in Honolulu. Kāhala Kāhala is a small and very…

END_OF_DOCUMENT_TOKEN_TO_BE_REPLACED

Why You Should Think Twice About Moving to Honolulu

There’s nothing like a vacation in Honolulu. White sand beaches, surfing, the smell of sweet flowers in the trade winds. It’s heaven on earth. But let’s just put this reminder on the table, right here…

END_OF_DOCUMENT_TOKEN_TO_BE_REPLACED

20 Things You Need to Know Before Moving to Honolulu

Some people dream of moving to Honolulu for a life of sunshine, friendly people and outdoor living. While the city really is a wonderful place to live, newcomers should be prepared for a very different…

END_OF_DOCUMENT_TOKEN_TO_BE_REPLACED

How Dog Friendly is Honolulu, Really?

It’s a good life in Honolulu, even for dogs, but getting your dog there from the mainland U.S. requires, well, jumping through some hoops. Hawaii is the only rabies-free state in the U.S., and there…

END_OF_DOCUMENT_TOKEN_TO_BE_REPLACED

Where Are All the New Residents of Honolulu Moving From?

Living in Honolulu probably sounds like living in paradise to a lot of people. Apparently, people who already live in Hawaii are a little skeptical of that idea, though. First a little background. The population…