Most people know Huntsville as the home of Space Camp, but for the city’s nearly 200,000 residents, it’s more than just a kid-friendly tourist destination.

It’s a vibrant, mid-sized metropolis that exudes Southern charm and hospitality while at the same time enjoying a reputation as a high-tech hot spot populated by some of the smartest people in the nation. Add in mild winters and a cost of living well below the national average, and it’s easy to see why so many people are choosing to call Huntsville home.

Here are 20 reasons why you should too.

1. Our history is out of this world.

Huntsville launched onto the national scene in the 1960s, with the arrival of Dr. Wernher von Braun and the creation of NASA’s Marshall Space Flight Center. Working around the clock, von Braun and his team were integral to the success of the nation’s Apollo Lunar Landing Program, helping America beat Russia to the moon and earning Huntsville the enduring nickname of the Rocket City.

From Jerry Seinfeld and Bob Dylan to “Spamalot” and “The Book of Mormon,” Huntsville’s arts scene has something for everyone. The city’s symphony orchestra, ballet company, Broadway Theatre League, community chorus, chamber music guild, children’s playhouse, and more ensure a packed calendar of professional performances year-round.

3. We appreciate the great outdoors.

The Wildflower Trail in Huntsville Alabama and part of Montesano Mountain. Love all the rain #nature #NaturePhotography #optoutside #waterfalls pic.twitter.com/yJ7IK9veLf

There’s a reason why Expedia named Huntsville the number one destination for nature lovers in the state: the city’s mild climate and its more than 70 miles of public trails maintained by the Land Trust of North Alabama. And that doesn’t even include the nine greenways – and four dog parks!

4. Our golf courses will make you green with envy.

Huntsville is home to the northern gateway of the Robert Trent Jones Golf Trail, a collection of 26 courses across Alabama designed by and named for the legendary architect. Hampton Cove course, the city’s 54-hole Scottish-links-style facility, comprises the Highlands Course, the River Course, and the Short Course.

5. We’re always gearing up for a ride.

Whether you’re a casual cyclist who enjoys coasting along the rolling roads beyond the city’s limits or a competitive one whose sights are set on the podium, Huntsville is a great place to clip in and saddle up. Don’t have a bike? Let the experts at one of the many mom-and-pop bike shops around town help. Then sign up for the popular annual All-You-Can-Eat Century, 100 miles of fun hosted by the Spring City Cycling Club.

6. We have a crafty approach to beer brewing.

Thanks to the repeal of antiquated laws that used to govern the city’s brewing industry, Huntsville is making a name for itself as one of the South’s premiere destinations for craft beer. Its Craft Beer Trail comprises eleven stops, including several in the city’s downtown Arts & Entertainment District.

Every weekend, hundreds of Huntsvillians take to the city’s streets – and waterways – to compete in road races, duathlons, and triathlons, most of which raise vital funds for local charities. Some of the city’s most popular are the Liz Hurley Ribbon Run, the Huntsville Sprint Triathlon, the Rocketman Triathlon, and the Rocket City Marathon.

Sitting as it does just over the Tennessee border, Huntsville is a lot closer to many of the South’s most popular destinations than one might imagine. Nashville and Chattanooga are both less than two hours away, while Atlanta is just under four. What’s five hours away? The Emerald Coast, 24 miles of white-sand beaches along the Gulf of Mexico that will more than match anything the Caribbean has to offer.

9. We won’t turn down a moveable feast.

Rivaling the explosion of the city’s craft brewery scene is the recent proliferation of food trucks, which now number over 50. Beast Mode’s incomparable French-Mediterranean cuisine, the “roaming bacon emporium” that is I Love Bacon, and the farm-to-table treats of Manic Organic are just a few of the meals on wheels that cruise Huntsville’s streets.

10. We make time to stop and smell the flowers.

One of the city’s most beloved landmarks is the Huntsville Botanical Garden, whose 112 verdant acres include a birding trail, a nature trail, a butterfly house, a children’s garden, an herb garden, and the Table in the Garden, a charming indoor/outdoor café.

12. The Appalachians end around here.

With its location at the tail end of the Appalachian Mountains, Huntsville can lay claim to one of the range’s southernmost peaks: Monte Sano. Comprising more than 2,000 forested acres, Monte Sano – pronounced “Mont-ah Sane-o” – boasts 34 miles of hiking and mountain-biking trails as well as a campground, cabins, a disc-golf course, and a planetarium for nighttime stargazing from its 500-meter-elevation vantage point.

With its iconic Saturn V rocket visible for miles around, the U.S. Space & Rocket Center is Huntsville’s most well-known attraction. Not only is it home to Space Camp, but it’s also the number one tourist destination in Alabama, with almost one million visitors to “Earth’s largest space museum” each year.

14. Yes, our baseball team is actually called the Trash Pandas.

HAPPY FRIDAY EVERYONE!
Some people love a beach view, others love the mountains.
We think the view from our office is pretty awesome too!
Every day we can look out our windows & watch them building our beautiful ballpark!
Opening Day April 2020 will be here before y'all know it! pic.twitter.com/TR5yO7zJbC

After a drought precipitated by the departure of the Huntsville Stars in 2014, baseball is coming back to the city in a big way. Introducing the Rocket City Trash Pandas! The minor league team will throw its first pitch in 2020 at a new stadium currently under construction. In case you’re still wondering, it’s another name for raccoon.

At the Annual International Festival of North Alabama, Huntsvillians are invited to travel around the world in a day, sampling ethnic cuisine, shopping the festival’s open-air market, and enjoying live performances from across the globe.

Helping solidify its reputation as the most educated city in the state are Huntsville’s six four-year institutions of higher learning: the University of Alabama in Huntsville, Alabama A&M, Oakwood University, Huntsville Bible College, Samford University, and Virginia College in Huntsville.

There’s a reason why “U.S. News & World Report” included Huntsville on its ultracompetitive list of the 25 best places to live in the U.S. in 2018. With a median home price significantly below the national average and a median salary well above, the city boasts an affordable cost of living that’s hard to beat.

FREE CONCERT this Friday from 6 PM – 9 PM! Chris Garrison and the Black Bird kick off Concerts on the Dock. Join us under the water tower for a night of local music! Parking on property is $5. We hope to see you there! #huntsville #hsv #hsvart #lowemillarts #artshuntsville pic.twitter.com/AgKmiv4Brl

A former cotton mill converted into the nation’s largest privately-owned arts facility, Lowe Mill ARTS & Entertainment is a central gathering place and work space for visual artists, makers, and performers. It features nearly 150 studios, 6 galleries, a theater, and a quirky outdoor music venue for the Mill’s Concerts on the Dock series.

Huntsville is simply the best Southern city you’ve never heard of – and now that you have, it’s time to plan a trip! 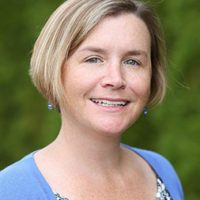 Diana is a Huntsville-based writer and editor. 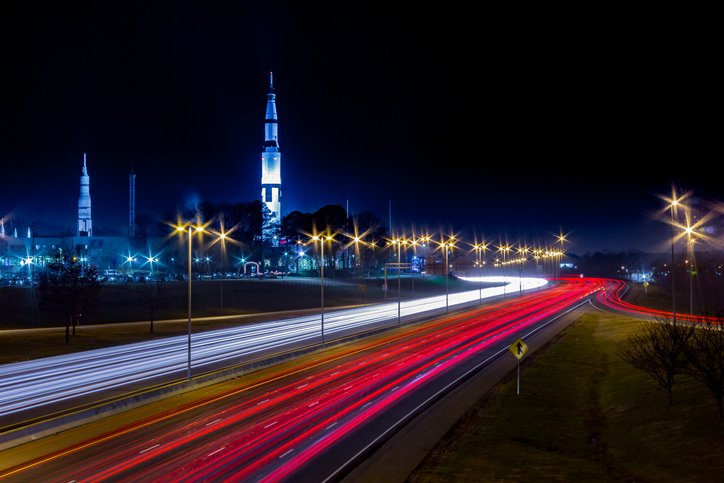 5 Most Iconic Landmarks in Huntsville, AL

Known as the 2nd largest city in Alabama, Huntsville is home to more than 400,000 residents. While it’s not currently on the list of the fastest growing cities in Alabama, it has seen substantial growth…

END_OF_DOCUMENT_TOKEN_TO_BE_REPLACED 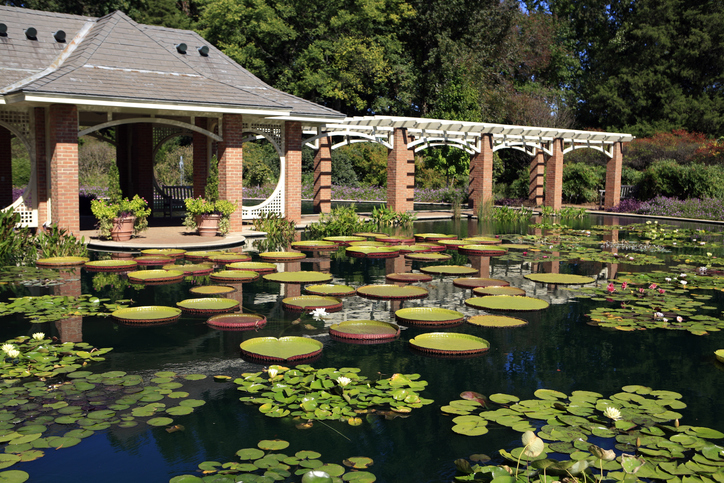 Outdoor enthusiasts will enjoy moving to Huntsville given its location in the foothills of the Appalachian Mountains. You’ll find plenty of parks to walk the dog, winding nature trails, and botanical gardens to enjoy throughout…

END_OF_DOCUMENT_TOKEN_TO_BE_REPLACED 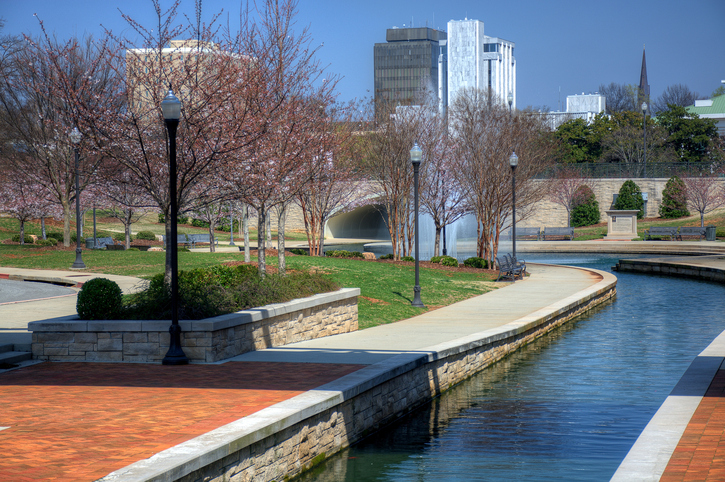 20 Things You Must Know Before Moving to Huntsville

Most people know Huntsville as the home of Space Camp, but for the city’s nearly 200,000 residents, it’s more than just a kid-friendly tourist destination. It’s a vibrant, mid-sized metropolis that exudes Southern charm and…