Though I wasn’t sure about a lot of things when I moved to Las Vegas, there was one thing of which I was certain: I wouldn’t be staying here longer than six months. I’d moved to Sin City for a job and figured the low cost of living would make it easy to save some money so I could move to a city with a much cooler rep. Somewhere like Austin, TX, or Portland, OR. To me, Vegas was like the boyfriend you have while studying abroad; a fun distraction, sure, but not a relationship you’d plan on keeping long term. Settling down in Vegas was out of the question. And yet, five years later, here I am.

Somewhere between the “I don’t really live here; it’s just temporary” and the purchase of my first home, I fell in love with this wacky town. And I’ve put down roots; buying a home and a dog and launching a business. And now the girl whom a friend once described as “the least Vegas person on the planet” makes a living encouraging others to do what I did: give Vegas a chance.

If Las Vegas hasn’t been on your radar as a possible relocation destination, here are seven reasons why you may want to reconsider.

Many entrepreneurs have found Las Vegas to be an attractive city to start a business. In fact, Tech.co named Vegas as one of the top seven best cities for startups in 2015, as did Forbes, which ranked it among the 12 best cities to launch a new business.

Population and job growth are also on the rise in Vegas, especially among those in their 20s and 30s. In fact, the website Vocativ listed Vegas as one of the top 10 places to live for young people.

Juanny Romero, the owner of one of Las Vegas’s most popular coffee shops, Sunrise Coffee, agrees, saying, “Las Vegas is a growing economy and the ability to open a successful business is achievable. I can’t even think how difficult it must be to open a cafe in NYC or San Fran.”

The Low Cost of Living

Although living costs aren’t as low as they once were, according to the most recent data from trulia.com, the average cost of a two-bedroom home is just $135,000, with average rentals going for a low $795 a month, which is below the national average, according to a 2015 National Apartment Report.

Romero thinks this is one of the city’s biggest draws, saying: “People have a lot of disposable income and aren’t struggling to make ends meet, like they are in other cities with huge populations.”

Nevada is also one of seven states with no state income tax, which means residents have more money to spend on the good stuff, like booze and pizza. Cool bonus: Pizza in Las Vegas is, coincidentally, 15% cheaper than it is elsewhere in the US.

While the Vegas arts community is still in its infancy, it is growing, with new galleries and public art installations cropping up in the Arts District every month. Many celebrities looking to escape the chaos of neighboring LA have recently relocated here as well.

“People are pretty relaxed about celebrities here,” says Southwest Vegas resident and UNLV student Amanda B., “Marie Osmond shops at the Target near my house. One of the Cirque performers lives down the street.”

Though the rainbow-colored neon city skyline is often thought to be one of the prettiest night skylines in the world, for those seeking beauty of a more natural variety, Vegas has a surprisingly large number of options.

Lake Mead, Red Rock Canyon and Mt Charleston are all located 30 to 45 minutes away. Many national parks are also within driving distance, including the Grand Canyon, Zion, Bryce and Joshua Tree.

Fun fact: Nevada has more natural hot springs than any other state in the country, with two located just outside the city limits. In my opinion, soaking in a volcanic spring amid a field of blooming cacti is one of the best ways to spend a spring afternoon.

From vegan burritos at Sunrise Café to an 8,000-calorie burger at The Heart Attack Grill, there is a little something for everyone in Vegas. Nearly every nationality of food is represented here (from Mongolian to Ethiopian and everything in between), which is an impressive feat for a city its size. Las Vegas literally has thousands of restaurants, many of which are owned by celebrity chefs.

The go-to question upon meeting someone new in Vegas is always “Where are you from?” as most everyone here is from somewhere else. Even the wild donkeys that roam the hills behind the gated communities of Summerlin are expatriates; imported from Mexico a century ago to work in state’s silver mines. This makes Vegas one of the most diverse cities on the planet.

Though Las Vegas is extremely culturally diverse, one common trait many people share is their open-mindedness. Nevada, according to a geography personality study, ranks as one of the top ten most “open minded” states in the nation. Apparently, there is a higher than average number of people living in the Silver City who are curious, creative and independent.

As Romero explains, “Las Vegas is one of the most eclectic cities you can live in. No one judges you based on what you wear…and if you are into unique hobbies. This city thrives on being always open and available, so you see so many walks of life.”

According to the same study, Nevada was found to be one of the least “neurotic” states in the nation.

People often associate Las Vegas with brutal heat, but the weather is, on the whole, relatively mild. The average annual temperature in the valley is 67 degrees, with temperatures rarely dipping below 45. While it is true that it is hot here in the summer (temperatures range on average from 90 to 104 degrees), as locals are always eager to point out, “it’s a dry heat”.

Moreover, as Vegas is located in in the middle of a 600-square mile desert, rain (and even clouds) are a rarity. In fact, it’s not uncommon for a spring rainstorm to make the evening news.

“Without a doubt my favorite thing about living in Las Vegas is the weather,” she states. “It doesn’t matter if it’s 105 or 35 degrees, the beautiful sun is still shining and the skies always powder blue.” 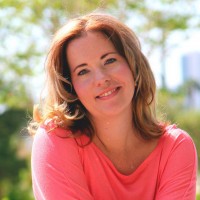 Reannon Muth is a full-time freelance writer, social media marketing consultant and a life-long travel addict. She’s traveled to over 40 countries and lived in five. Currently, she resides in Las Vegas, where she enjoys hiking, camping and daydreaming of where she’ll travel next.
WebsiteTwitter