SpareFoot Moving Guides » Moving to Las Vegas, NV » How to Sound Like a Local in Las Vegas
Skip to content

Las Vegas is a tourist town, but how do you blend in like a local? Where do the city’s artists, entrepreneurs, industry workers, students and other young professionals hang out? What does Vegas life look like, away from the tourist-laden Strip?

Here are five things you should know if you’d like to see a more authentic side of life in Las Vegas.

First, let’s be clear: downtown Las Vegas is not the same area as the Strip.

Downtown Vegas, often called “downtown” or “DTLV” by its residents, is located about three to four miles north of the Strip, in an area that tourists know as “Old Las Vegas.” None of the locals call it that.

Someone take me to the Las Vegas Arts District. (18b) pic.twitter.com/FI1KkVe1SI

Downtown is roughly divided into two districts — the Arts District and Fremont Street, each located around one mile from each other. (More on each of those areas below.) Both areas are home to vibrant communities of artists, entrepreneurs and other iconoclasts. Fremont, in particular, is covered with murals and street art; look for the giant metal sculpture built from two semi-truck cabs stacked on top of each other.

Downtown residents tend to either reside in a neighborhood of inexpensive ranch homes clustered along the east side of downtown or in modern luxury high-rises like the Soho, Juhl, Ogden and Newport Lofts.

Downtown’s Arts District is perhaps most famous for First Fridays, an outdoor festival featuring local artists, craftmakers and plenty of bar-hopping. It’s held on the first Friday of every month in a parking lot surrounded by bars at the center of the arts district.

While this area used to be known as the “18b” – a reference to its original founding as an 18-block district – these days most locals simply refer to it as the “arts district.”

This section of downtown features community co-working spaces like Work in Progress, coffeeshops like Makers and Finders, and a handful of locally-owned bars, shops and restaurants.

Downtown’s Fremont Street district (which locals call “Fremont,”), located just a mile from the Arts District, is known by tourists for the Fremont Street Experience, a four-block stretch of casinos covered by an LED canopy. But that’s not the space where locals hang out.

Locals, instead, tend to congregate around East Fremont, the area just outside of the tourist center, where a handful of locally-owned bars, restaurants and shops showcase the area’s quirky personality. This is the neighborhood where you’ll find Bombshell, a beauty salon with a retro, pin-up girl theme; Atomic, the city’s oldest freestanding bar and a popular spot among the happy hour crowd; and PublicUs, a coffeeshop with fresh, all-natural food that’s frequented by Fremont’s laptop-toting residents. Many locals spend their evenings at Goldspike, a hotel and bar with a sprawling, fire-pit clad backyard playground with games like tetherball, cornhole, and life-sized Jenga and chess.

The Container Park, a three-story retail, restaurant and bar center built from shipping containers, is a favorite among both locals and tourists alike. The giant playground in the center draws families with young kids, and many locals come to the park to watch movies-on-the-green in the summertime.

You might be surprised to learn that Las Vegas is a prime place to live for outdoor enthusiasts.

Red Rock Canyon National Conservation Area, known to locals simply as “Red Rocks,” is the playground for Vegas’ outdoor enthusiasts. Located 17 miles west of the Strip, many locals flock to Red Rocks for its expansive hiking trails and climbing routes.

Mt. Charleston, located about 45 minutes from downtown, is the local favorite destination for skiing, snowboarding, and hiking during the heat of the summer months. Thanks to its altitude over 7,500, Mt. Charleston provides a respite from the summer heat for Vegas’ many nature addicts. 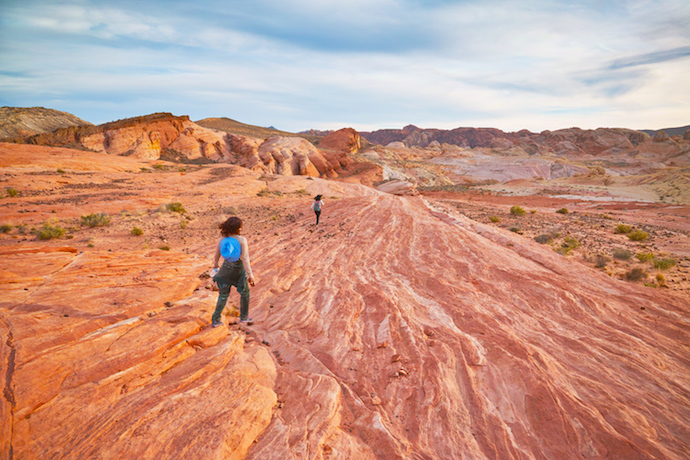 Valley of Fire State Park, located 58 miles northeast of the city, is an easy day trip for hiking-loving locals, while Zion National Park in southern Utah — known simply as “Zion” — is a popular weekend trip for the city’s residents.

As you hang out with Vegas locals, you’ll need to know how to pronounce some names properly.

Let’s run through a quick lesson:

Nevada: Locals refer to their state as Nuh-vad-uh, with a short “a” in the center.

Sahara: This major road, which runs through a wide swath of the city, is pronounced sa-hair-uh, *not* sa-har-uh.

Decatur: This other major road is pronounced de-cay-tur, *not* deck-a-tour.

Paula Pant is a writer based in Las Vegas.