Those who’ve never been to Sacramento, CA, often think of it as little more than a convenient gas-and-snack point halfway between the ocean (San Francisco) and the mountains (Lake Tahoe). That’s OK — it can be our little secret. Sacramento boasts an easygoing vibe, great food and drink, and plenty of fun. Here are 20 things you need to know before moving to Sacramento.

The Delta breeze is a lifesaver. Because the city sits at the confluence of two major waterways, the American River and the Sacramento River, when the sun dips below the horizon, so does the temp. In fact, summer evenings here can be downright chilly.

If that cooling breeze isn’t enough, just find a tree. They’re everywhere. In fact, Sacramento’s known as the “City of Trees,” as it boasts more trees per capita than any other city in the world.

If you didn’t have seasonal allergies before moving to Sacramento, chances are you’ll develop them once you’re here. It’s all those trees. In fact, a study by research lab Quest Diagnostics listed Sacramento as one of the worst 30 U.S. cities for allergy sufferers. Gesundheit! And pass the tissue.

The city’s urban core is the hippest place to be. Built on a grid system — numbered streets run north to south, lettered streets run east to west — the midtown and downtown neighborhoods are teeming with trendy lofts, restaurants, nightclubs, salons and boutiques.

This is a Sacramento Kings town, pure and simple. The NBA team’s been a fixture here since 1985. Although the Kings never have won a championship, you’ll be hard-pressed to find fans more loyal. In fact, you might want to bring earplugs to the next game; in 2013, the team’s fans set the Guinness World Record for Loudest Crowd Roar.

The Sacramento region is an agricultural mecca — so much so that city leaders have dubbed it the Farm-to-Fork Capital. Translated, this means we’re renowned for a cornucopia of restaurants that serve local farm-fresh veggies, fish and meat.

9. Make mine a pour-over with a double shot of espresso.

In the mid- to late 1800s, Sacramento was known as a beer town with numerous breweries and hops fields. More than a century later, we’re exploring our heritage via a wealth of breweries, tasting rooms and pubs. We even have an entire week dedicated to the foamy stuff. Whether you like light lagers, hoppy IPAs, malty stouts or mouthwatering sours, there’s a locally made brew for you.

It almost goes without saying that most Sacramento drinkers love a good glass of wine. The city is nestled among the Amador foothills, Napa Valley and the Delta region — all home to award-winning wineries, and all just a short drive away. Rent a limo (or book a wine-tasting tour); it’ll be more fun that way.

Highbrow art. Lowbrow art. Crafty art. Art for art’s sake. Doesn’t matter what kind it is, we love it, and we celebrate it in style with our long-running 2nd Saturday, which takes place monthly. That’s when galleries across the city (especially in midtown and downtown) host artists’ receptions as an excuse to ply the art-loving public with free cheese and wine. The fun isn’t just limited to traditional galleries, either. Local boutiques, salons, restaurants and even bike and auto repair shops get in on the fun, too, with exhibits, live music and more.

Swiss immigrant John Sutter founded Sacramento in 1839. By 1849, the region had exploded in growth thanks to the discovery of gold in nearby Coloma. Ultimately, the Gold Rush drew about 300,000 miners. While most didn’t strike it rich, the population influx helped establish Sacramento as a major player.

Officially, Sacramento’s nickname is “The Big Tomato,” thanks to the region’s abundance of tomato growers. Our unofficial nickname, however, is more bovine in nature. But don’t call us Cowtowners or Sacra-tomatoes or whatever. It’s Sacramentans. Period.

No need to get max out your fashion budget. We keep it pretty low-key here. The vibe is part bro, part hipster and part hippie — think jeans, baseball caps, Converse and pair after pair of Birkenstocks.

Most Sacramentans roll their eyes at the mention of Old Sacramento — the riverfront stretch of “Old Town” populated by as many T-shirt, souvenir and candy shops as actual historical markers. But if we’re being honest, trips to Old Sac aren’t just reserved for grandparents and visiting guests. We all not-so-secretly love the $5-per-quarter-pound saltwater taffy, the horse and carriage rides, and the cobblestoned streets.

In the early 1860s, record storms flooded Sacramento, turning its streets into waterways. This prompted the city to raise the streets an average of 10 feet. The result was an underground city populated by tunnels and abandoned storefronts that still run beneath much of Old Sacramento and downtown. Rumors are that it’s haunted. Find out for yourself sometime as part of a docent-led tour.

20. We’re serious about our pizza.

Thin crust or deep dish style. Traditional red sauce or the creamy stuff. Locals love to argue about which Sacramento pizza is the best. Seriously, bring up Zelda’s Pizza sometime and prepare yourself for hot, doughy and cheesy debate.

END_OF_DOCUMENT_TOKEN_TO_BE_REPLACED 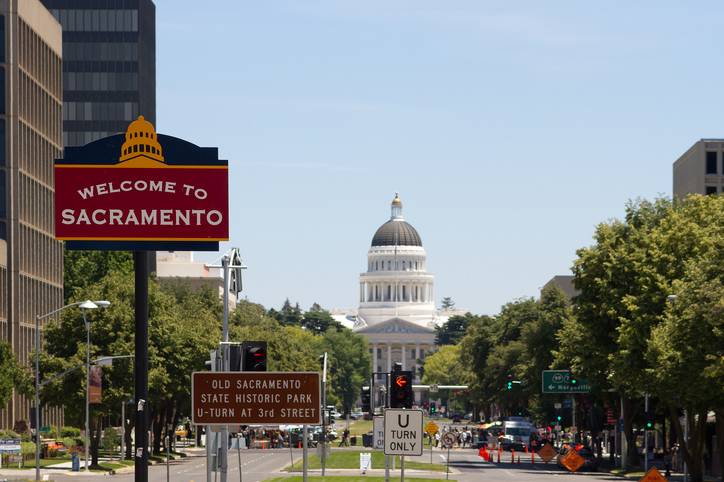