With 3 million new residents last year, Tampa is one of the fastest-growing metropolitan areas in the United States.

Far from its old retirement-community image of “heaven’s doorstep,” Tampa and its neighbor across the bay, St. Petersburg, are the No. 3 and No. 1 best cities respectively for millennial job seekers in the state, according to a recent study by NerdWallet.com. In fact, millennials make up a whopping 24 percent of Tampa’s population, the study found.

Tampa stands out for having a thriving nightlife scene, great restaurants, a killer airport, plus beloved professional sports teams and festivals galore, including the annual pirate festival that lasts a month and draws in rovers from around the country.

But it’s not all clear skies. Here are a few reasons sunny Tampa Bay, Florida may not be for you.

Meteorologists have warned that Tampa is well overdue for a massive hurricane. As it is, the storm water drainage system is lacking, leaving some streets with impassable flooding even from regular rainstorms. It’s not uncommon to hear about tornados and sinkholes.

A direct hurricane hit, however, is potentially the largest threat, which could result in worse damage than Hurricane Katrina, the Washington Post reported. The paper referred to Tampa’s relationship with hurricanes as an “epic game of dodgeball.”

Tampa Mayor Bob Buckhorn was even quoted as saying that even a Category 3 hurricane would leave downtown Tampa “15 feet under water.”

If you’re planning to buy a house or condo here, you’re likely going to need to purchase flood insurance and hope for the best every time hurricane season rolls around.

If you aren’t cool with heat, the summer will be rough

Tampa has two seasons: When people are around and when they aren’t. After all, its not just the snowbirds (retirees) who “fly” north in June and return south in October.

But everyone does it. Florida’s June through September is like winter in many northern states: You stay indoors due to the typically brutal heat and stifling humidity. Stifling as in you’re walking your dog well after sunset and you still come home drenched in sweat. While the mercury may land somewhere between the upper-80s and mid-90s, the humidity makes it feel much worse. Often, it’s just too hot and humid this far south to hit the beach, or do much of anything beyond pouring yourself a refreshing beverage and huddling inside the air conditioning.

Rents are on the rise

If you’re planning to rent a house or apartment, rent in Tampa may seem like a steal compared to cities like New York, Boston or Los Angeles. However, the cost to rent a one-bedroom apartment has been steadily rising for the last few years, and went up 5.8 percent to $980 between December 2016 and 2017, the 11th highest increase for a city the U.S., according to ApartmentList.com.

The @CrossBayFerryTB isn't coming back this year partly because @BobBuckhorn doesn't really support it. What a shame. I won't go to St. Pete by car, only by ferry. Let's make this permanent w/S County 2 MacDill AFB commuter service & weekend svc. from Tampa to St. Pete. pic.twitter.com/4tuA0EmTHK

Do you hate driving and prefer commuting by train or bus? Tampa is not the place for you. The Tampa Bay Times reported that “out of the country’s 30 largest metro areas, the region ranks 29th in four of six common ways the federal government measures public transit coverage and usage. The other two ways, it ranks dead last.”

Not only is Tampa’s public bus system a nightmare for commuters, but let’s say, you want to party with your friends at one of St. Petersburg’s amazing beaches, just a 30-minute drive across the bay. Your best bet is splurge on an Uber or Lyft for $30 or $40 depending on where you are, and it’s common practice for partygoers to book an Airbnb or hotel instead. The city was experimenting with a ferry to shuttle people across the bay, but chose not to renew it for fall 2017, and it’s unclear when it’ll relaunch.

If nothing else though, it’s important to remember that Florida’s a weird place to live. Not like New York City strange, with its crazy fashion statements and massive crowds, or like Portland strange, with its eccentric people and artsy scene.

Here’s just a few examples: One of Tampa’s most celebrated events, Gasparilla, is a pirate festival celebrating a guy who never actually existed (during which, a pirate ship leads hundreds of other boats sailing into the Bay, and with guns blazing, steals the key to the city). Drive an hour from Tampa and you can spend the day at a theme park called Gatorland, complete with real alligators. About 40 minutes north of the city, you can apply for a job as real life mermaid. The city of Clearwater is home to the Church of Scientology.

There are regular news stories like this one, of a possum getting drunk after breaking into a liquor store, or a guy parking his car in his living room to save it from Hurricane Irma.

Millions of people, though, have found that the benefits to living in Tampa outweigh the downsides. In many ways it’s an unpredictable place and increasingly crowded place to live.

Is it the right fit for you? 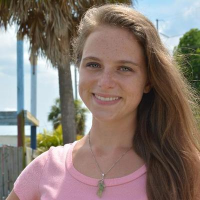 Alli Knothe is a freelance writer and business reporter based in Tampa, Florida.