Reality TV shows like Lifetime’s “Hoarders: Family Secrets” have given millions of viewers a glimpse into the lives of extreme hoarders, yet a new survey shows that many Americans have a skewed sense of hoarding.

Over half (52 percent) of Americans say they know someone—a coworker, friend, neighbor or relative—who’s a hoarder, while 7 percent identify themselves as hoarders, according to the survey, conducted for SpareFoot by Princeton Survey Research Associates International. Just 2 percent to 5 percent of Americans are classified as hoarders, according to the American Psychiatric Association.

Matt Paxton, one of the stars of the “Hoarders” franchise, said he thinks 52 percent actually is too low. “I think we all know someone who’s a hoarder—it’s just that we may not be aware of it,” Paxton told The SpareFoot Blog.

Still, that doesn’t mean that everyone who’s pegged as a hoarder really is a hoarder.

“Partly because of the shows that have been on TV, people tend to use the term ‘hoarding’ very loosely,” said Linda Samuels, president of the Institute for Challenging Disorganization, which offers resources on chronic disorganization. “A lot of it has to do with perspective.”

Paxton agrees that the word “hoarding” is overused, “but the point that it’s even being overused means that our awareness of hoarding is much higher.” 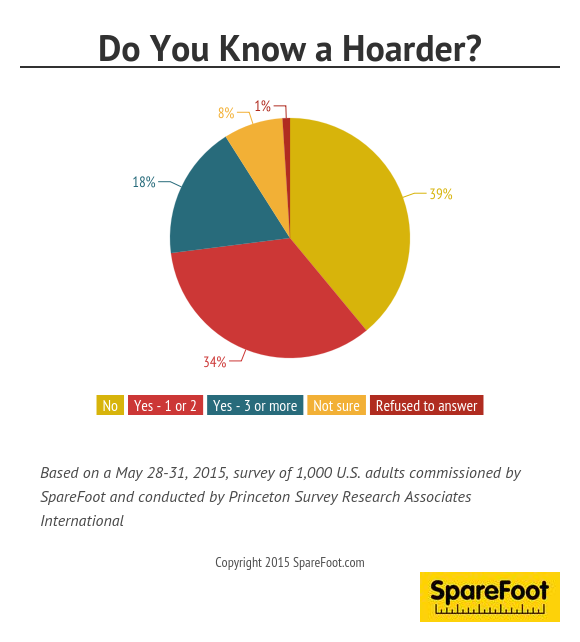 It’s common for people who don’t understand hoarding disorder to negatively label those who suffer from it, said social worker Terry Shulman, founder of The Shulman Center for Compulsive Theft, Spending & Hoarding. “There’s a lot of judgment and misunderstanding,” he said.

In reality, hoarding isn’t just an accumulation of stuff. A big hallmark of the disorder is tremendous difficulty parting with objects—even things most people would consider worthless, like expired coupons, old newspapers and rotten food, Shulman said.

A person can be coping with a lot of clutter at home without having hoarding disorder. For example, a person who lives in the same house for 60 years easily can amass a lot of stuff but not be a hoarder, Bell said.

Also, people with other problems, such as ADHD, anxiety disorder or chronic depression, might accumulate clutter for various reasons, said professional organizer Regina Lark, owner of A Clear Path in California. 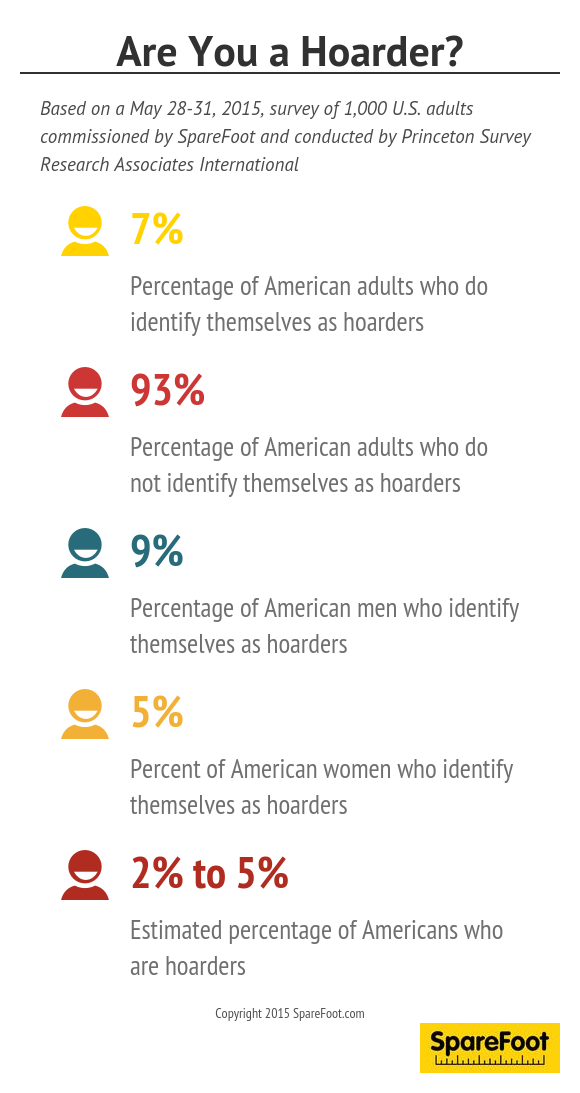 For example, Samuels once worked with a client who had grappled with severe depression, leaving her unable to deal with tasks like sorting through mail or tidying up her home. The house looked like a hoarder live there, but this client had no problem throwing out stuff that she deemed trash, Samuels said.

“Someone’s home might be a mess, with every surface covered,” Lark said. “But if they say, ‘This is all junk, let’s let it go,’ then I know I’m not dealing with full-blown hoarding disorder.”

To learn the signs of hoarding, visit blog.sparefoot.com/4243-signs-that-youre-a-hoarder.

Sometimes, the misperception happens in reverse, too, Shulman said. Fans of shows like Lifetime’s “Hoarders: Family Secrets” or TLC’s “Hoarding: Buried Alive” might assume that if a home doesn’t look as terrible as the ones on TV, there’s no problem, Shulman said. However, hoarded stuff might be in the basement, in a rental house nearby or in three storage units down the street, Shulman said.

“The home doesn’t have to be a disaster area,” he said.

Not a Character Flaw

Most Americans have no idea that hoarding is a mental disorder. Instead, many think of hoarding as being a packrat, having a cluttered home or even being a bad person, according to the SpareFoot survey.

“Many people think all you have to do is get motivated or hire a moving company,” Shulman said.

Even mental health professionals still are learning about hoarding. In fact, hoarding wasn’t even classified as a mental disorder until 2013, when the fifth edition of the American Psychiatric Association’s Diagnostic and Statistical Manual of Mental Disorders (DSM-5) came out, according to Lark.

“Look how long it took the psychiatric community,” said Lark, adding that it’s no surprise the general public remains in the dark about hoarding as a mental health issue. 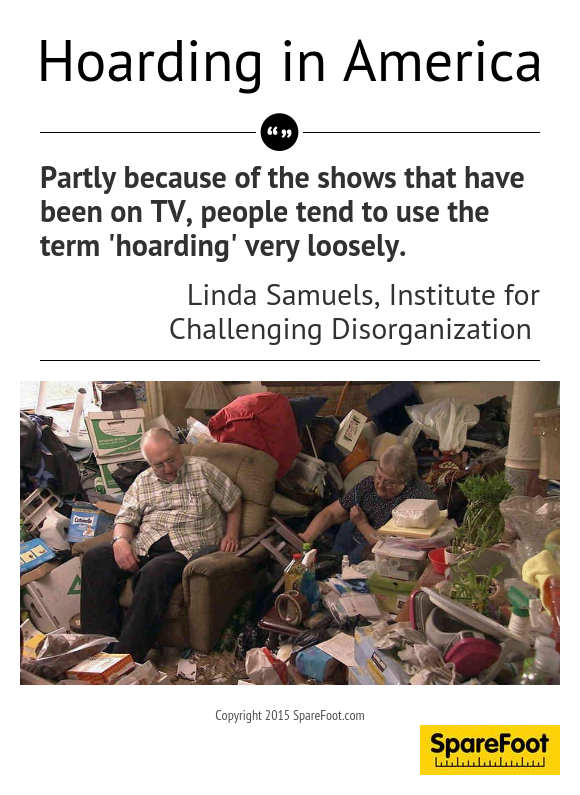 Shedding Light on a Dark Subject

Now, however, information about hoarding is being brought into the light through websites, books, support groups and therapy, Shulman said. “So, people are beginning to understand this is a disorder,” he said.

Still, almost 15 percent of Americans questioned in the SpareFoot survey dismiss hoarders as dirty, greedy, lazy, selfish or even just plain bad. “Those terms are unfair and not true,” Shulman said. “But people do judge.”

All kinds of people wrestle with hoarding disorder, including people you’d describe as artistic, creative, talented, interesting, warm or social, Samuels said. “It’s a challenge they have, a very deep-seated challenge,” she said. “But it doesn’t define who they are.”

Getting Help for Hoarding

Many people with hoarding issues don’t realize they’ve got a problem, so they might not seek help unless they’re facing serious consequences like eviction, Samuels said.

Getting treatment for hoarding disorder typically requires help from a team of people—such as a therapist and a professional organizer—with deep experience in and knowledge of hoarding disorder, Samuels said.

However, there’s a misperception that any professional organizer can just waltz in and fix a hoarding situation, she said. An organizer without training and experience in hoarding disorder can do or say the wrong things and even make the problem worse, Samuels warned.

The International OCD Foundation offers help for hoarding and a therapist search tool, and the Institute for Challenging Disorganization provides an organizer finder.

Once a hoarder does get help, that doesn’t mean the disorder vanishes. Shulman said it’s something a hoarder must “stay on top of,” either on his own or with a well-trained professional organizer.

“People have to understand this is a lifelong journey,” he said.

Princeton Survey Research Associates International’s May 2015 Omnibus Week 4 survey obtained telephone interviews with a nationally representative sample of 1,000 adults living in the continental U.S. Telephone interviews were conducted by landline (500) and cellphone (500, including 319 without a landline phone). The survey was conducted May 28-31, 2015, by Princeton Survey Research Associates International. Interviews were done in English and Spanish by Princeton Data Source. Statistical results are weighted to correct known demographic discrepancies. The margin of sampling error for the complete set of weighted data is ± 3.5 percentage points.