Fans of Japanese organizing guru Marie Kondo (pictured below) have called her a “warrior princess in the war on clutter.” Fast Company magazine went so far as to name her one of its most creative people in business for 2015. But professional organizers have mixed feelings about her one-size-fits-all system. 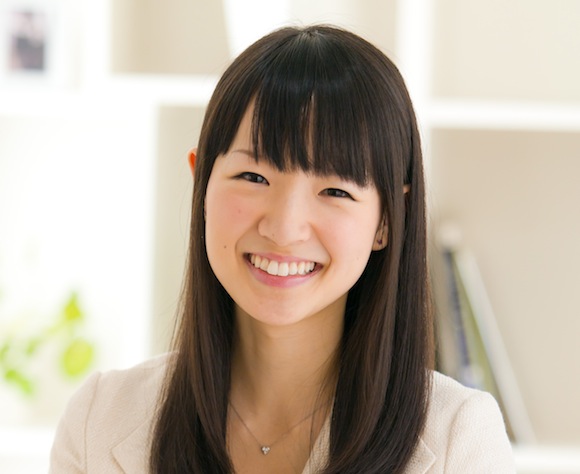 “I hear people using her name, like, ‘Oh, I totally Kondo’d my bathroom,’” said author and productivity expert Rivka Caroline, who agrees with some of Kondo’s advice. “It’s adorable.”

But, she added, “I don’t believe I’ve heard one brand-new concept from her.”

If you haven’t picked up Marie Kondo’s book, “The Life-Changing Magic of Tidying Up,” you can get the gist of it by listening to her talk on YouTube.

Here are four tenets of her system, known as the “The KonMari Method.”

Kondoism #1: Tidy Your Whole Home Quickly in a Short Period of Time. Set a Deadline.

Trying to do everything at once can be overwhelming, Lava said. “Plus people have got lives—they’ve got businesses, work, family, and they want to go on vacation,” she said.

Lava recommends starting small, working maybe 30 minutes at a time if you’re organizing on your own. “Be nice to yourself; give yourself a break,” she said. 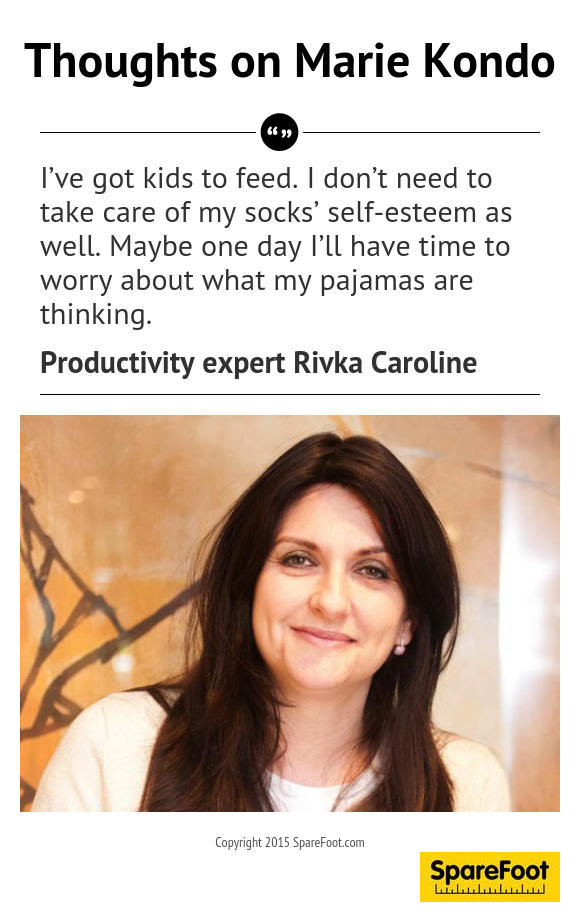 Kondoism #2: Sort by Category, Not by Location.

Decide on one type of item to organize—start with clothes, then move to books—and put all the items in one big pile so you realize how much stuff you have, Kondo recommends. That approach can work in some cases, but Lava prefers to go by room or by problem area with her clients.

For example, one person might want to start by tackling an overflowing closet, while another might want to solve the problem of mail piling up all over the house. “For me, it just depends on what the needs are,” Lava said. 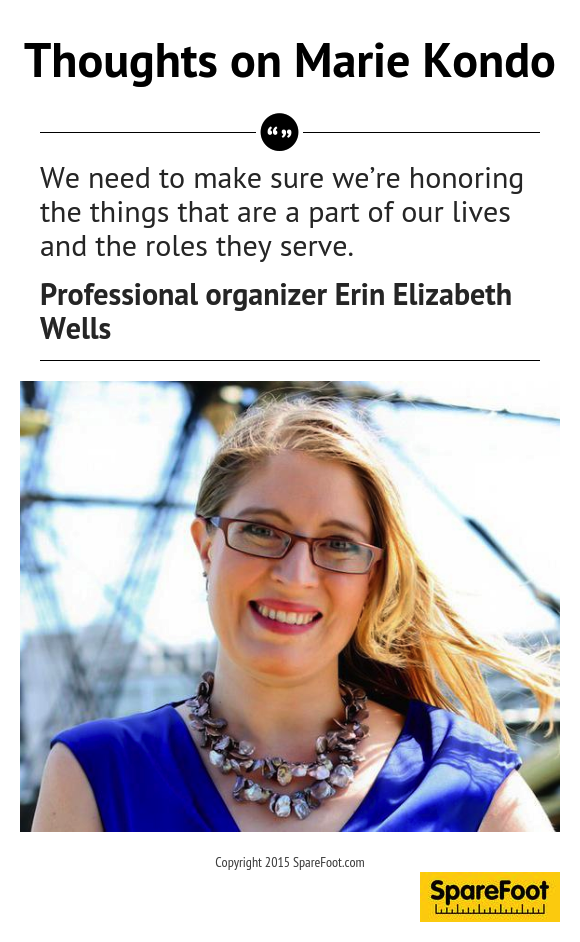 Kondoism #3: Lay Everything Out and Focus Not on Deciding What to Get Rid of, But on What to Keep.

“I totally agree with that method,” said Caroline, adding that she touts the idea in her book “From Frazzled to Focused: the Ultimate Guide for Moms Who Want to Reclaim Their Time, Their Sanity and Their Lives.”

But the concept isn’t at all new, said professional organizer Erin Elizabeth Wells, founder and CEO of Living Peace.

“It’s often referred to as weeding in reverse, and it’s been around for years,” Wells said.

In fact, Wells recently used the technique to help one client, a passionate cook, thin out her collection of cookbooks. “It’s a pretty classic organizing concept,” she said.

Kondoism #4: Touch Each Item, and Pay Attention to How You Feel. Keep Only Possessions That “Spark Joy.”

It’s a good idea to focus on the stuff you love, keep items that make you happy and ditch those that don’t, Caroline said.

“If you have a couch that’s from your mother-in-law who hates you, or your ex-husband, it’s got to go,” she said. “If something doesn’t make you smile, pass it on.”

However, there are some areas where Kondo goes too far, some organizers say. For example, in her book she recommends that you take all items out of your handbag at the end of the day so it can rest, and that you unfurl balled-up socks so they can relax in a drawer.

That’s a bit of a stretch, said Caroline, a mother of seven.

“I’ve got kids to feed. I don’t need to take care of my socks’ self-esteem as well,” she said. “Maybe one day I’ll have time to worry about what my pajamas are thinking.”

However, while Kondo’s language might sound “poetic” to many Americans, it’s a good idea to treat possessions with respect, Wells said. “We need to make sure we’re honoring the things that are a part of our lives and the roles they serve,” she said.

So if Kondo’s advice isn’t novel, why has the “KonMari Method” sparked such a fervent following? It’s probably Kondo’s style and her way of presenting organization concepts, Caroline said.

“It’s always nice when somebody new comes along and gives the message in a fresh way,” she said.