How can you tell if you have a hoarding disorder?

A solid first step would be to compare your habits and home surroundings to the several clutter-hoarding scales that have been developed by psychologists, professional organizers and even one high-profile reality TV star and cleanup expert.

Why so many hoarding scales?

The short answer is, hoarding is complicated, both for the person who struggles with the disorder and the army of friends, family members, professional organizers, therapists, first responders, code enforcers and cleanup crews it can take to help them kick their hoarding addiction.

The Hazards of Hoarding

Compulsive hoarding is typically a sign of some other underlying mental illness that your loved one is having trouble resolving. Hoarding poses many threats to physical health. Hoarders have a hard time discarding of items others would see as trash which over time accumulates to the point that poses a fire hazard and threat to human health. Depending on the severity of the hoard, hoarding cleanup might involve the use of PPE. The cleanup process could be long and complex if there is mildew, excessive dust, animal waste, or other unsanitary conditions.

So how does one measure the severity of a hoard?

There are actually a number of different evaluation methods for determining whether a hoarding situation is taking place. Here are three scales used to evaluate the severity of a potential hoarding problem. Every situation is different, so consider each to determine whether the levels of hoarding you see are cause for concern or just the case of an overzealous magpie.

The 5 Stages of Hoarding

The Institute for Challenging Disorganization, a St. Louis, MO-based resource for professional organizers, developed its ICD Clutter-Hoarding Scale strictly as an assessment tool for household environments, not as a diagnostic tool for psychological evaluation of the resident.

The ICD scale breaks down hoarding households into five color levels. The scale then summarizes the impact of each layer of clutter by its impact on structure and zoning, animals and pests, household functionality, and health and safety concerns:

Finally, it recommends personal protective equipment for each level. That runs the gamut from work gloves, insect spray and hand sanitizer for the blue level. For a red zone clean up you’d need respirators, goggles and headlamps.

“It can be unsafe for both the person living in that home as well as the trained professionals working there,” said ICD president Linda Samuels. “We wanted to make sure that the professionals understand what they’re walking into and how to protect themselves, because it can be a dangerous situation. Without that information, you could do more harm than good.”

Although hoarding was long considered an extreme example of obsessive-compulsive disorder (OCD), it was given its own hoarding disorder diagnosis in 2013. According to the International Obsessive Compulsive Disorder Foundation, the compulsive hoarder:

Other mental conditions may also be present. For instance, the National Institute of Mental Health estimates that roughly 1 in 4 persons with hoarding disorder also suffer from Attention Deficit Hyperactivity Disorder (ADHD).

“There is stress associated with hoarding. It causes them extreme distress to let go of items, so they choose not to make those decisions to prevent the distress,” said Shawndra Holmberg, a Pennsylvania-based professional organizer. “And they tend to accumulate multiple copies of things in an attempt to stop the pain.”

Unlike the ICD Clutter-Hoarding Scale, the OCD Foundation’s Hoarding Rating Scale is designed to focus solely on whether you exhibit the emotional and psychological traits that typify hoarding disorder. 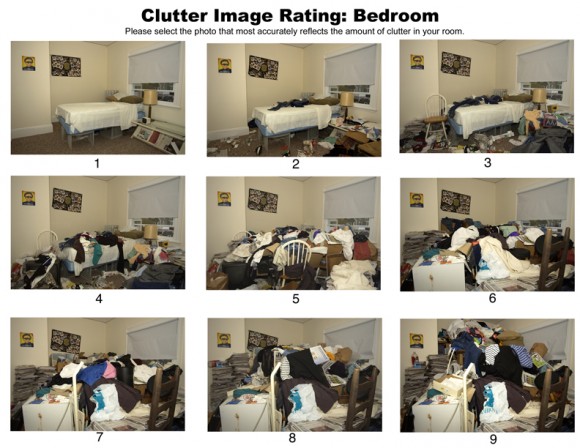 In addition, the OCD Foundation created a Clutter Image Rating Scale to provide a visual comparison tool that depicts the same kitchen, bedroom and living room of a home, each with nine levels of clutter. If any of yours resemble level 4 through 9, you’re encouraged to seek hoarding help.

“Those pictures are really valuable,” said Clutter Cutters professional organizer Terina Bainter, a hoarding disorder specialist based in Puyallup, WA. “It’s all about awareness. The biggest thing anybody can do is get someone to get help sooner, because the further down the road you are, the harder it is. If they can get help when they’re at a Level 2 or 3, the costs are significantly less and the outcomes are greater and quicker.”

You can download the full Clutter Image Rating assessment here in a printable format. 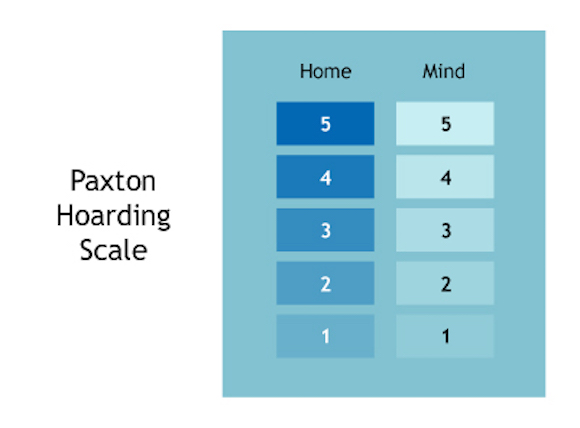 Matt Paxton, host of the new Lifetime “Hoarders” reboot “Hoarders: Family Secrets” and author of “The Secret Life of Hoarders,” developed his own Paxton Hoarding Scale to integrate both the physical and psychological aspects of hoarding disorder.

Paxton and his Richmond, VA-based Clutter Cleaner crew have attended to more than 300 extreme hoarded homes over the past decade. While he developed his scale in part to get all parties on the same page with the hoarding situation facing them, by the time he arrives, there’s rarely time for reflection.

“I clean the worst of the worst, so the people I get are going to lose their homes tomorrow, their families tomorrow. By the time they’ve called me, they don’t really have a decision anymore; it’s already been taken away from them, either through governmental action or family intervention,” he said.