New York native and painter Raphael Cohen wanted to showcase his colleagues’ amazing collections of work in New York City. What he found along his quest was the crushing cost of renting spaces in the most expensive real estate market on the planet.

Feeling that the opportunity to display important works of representation-starved creative was lacking, he decided to think outside the box. He went to an unlikely ally, Manhattan Mini Storage, and started Juicys Gallery. Cohen has operated the gallery since 2011 and has been entertaining a new space with each iteration of the show.

Usually constrained to a space of 5’ x 10’ for each exhibition, he started a successful run of pop-up shows around the city inside storage spaces usually reserved for stuff that won’t fit in your apartment. Visits to the exhibition were by appointment only.

“Manhattan Mini Storage was very nice, very helpful. As long as I didn’t leave trash in my wake or encourage vandalism on their property, they were happy to have me,” Cohen said.

Most of the time storage managers had to deal with stressed out people in the midst of a move or other unsettling life event.

“[The staff were] not used to having a polite and respectful guy come up to the counter and ask to rent a spot so several dozen people come check it out for an evening,” Cohen said. “They thought it was fun and it didn’t break any of their terms of use rules, so yeah, they were stoked.”

Cohen said Manhattan Mini worked with him to find available units in their various facilities, allowing the gallery to move to a new space for each exhibition.

“Without their support, I wouldn’t have been able to showcase some great works during First Friday exhibitions going on at upscale galleries just a couple blocks away,” Cohen said.

The storage facility had another major perk for visitors: “My show was the only one that had a parking lot! That in itself made the Juicy shows a smart destination for gallery-hopping New Yorkers,” Cohen said.

He recalled a particular show done at Manhattan Mini’s location in Chelsea–Manhattan’s art neighborhood mecca–during a particularly high-profile weekend. He had curious art lovers spilling over from champagne-serving, stark-walled spaces adjacent to the storage facility and digging his non-traditional location.

“The spaces I used presented their own unique quirky challenges for sure. The corrugated steel, harsh overhead lighting, and confined spaces were detraction at first until I learned that I could use the aesthetic creatively,” Cohen said.

Cohen said he started thinking of the space as part of the show and not an element opposed to it.

“I incorporated the scenario into the themes of the exhibitions, the whole project seemed to make more sense to everyone,” Cohen said.

Raphael is following up his successful run of shows in New York with a pop-up space inside a shopfront window in Los Angeles, as well as the regular shows he hosts in his own apartment. He intends to return to the storage space game soon, just looking for the right group of artists to represent.

“Setting is key in any presentation. I felt it was a good time to show that all galleries need not be stark, antiseptic environments trying to hide itself for fear of detracting attention from the exhibition,” Cohen said. 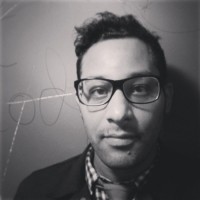 Christian Detres writes, produces, directs, markets, curates things all over the place and is probably good at one of those things (odds are, at least.) He currently throws parties all over Bushwick with the Transpecos crew, he is a food writer at Bushwick Daily, Executive Producer at allthingsgomusic.com, and owner of his own media consulting firm CD3 Consulting.