Two years ago, in a cost-saving move, the struggling, majority-black city of Flint, MI disconnected from Detroit’s water system and tapped directly into the Flint River. Shortly afterwards, residents began to complain about the color, odor and taste of the river water, as well as rashes and coliform bacteria contamination from its use.

Like millions of Americans, Mike Laragy, Fayon Jones and Rachel Bayer saw a part of themselves in the residents of Flint and decided to do something about it.

“We could all be Flint,” said Laragy, who owns Bristol Self Storage on the outskirts of town in Burton. “I think we’re going to see some of these older cities starting to look at this infrastructure stuff a little closer.” 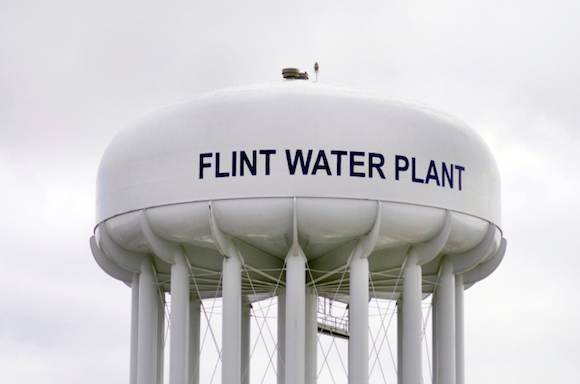 It was many months before the rest of the country started to look at what was happening in Flint.

Laragy does his part to keep clean water available in Flint by offering to donate 10 cases of drinking water for every new rental until the crisis abates.

“Our site would be inconvenient for most folks because we’re outside the city limits, but we felt it was something we could do to chip in,” he said.

Point A to B

While self-storage units seem like a logical place to stash pallets of donated cases of water, local facilities do not appear to be seeing a surge in demand.

“I was in Flint recently and I know they’re storing a lot of water in federal and city and county buildings,” DeWitt said.

It turns out collecting water is easy; hauling it to Flint is hard. Fortunately, U-Haul general manager Rachel Bayer in nearby Troy, MI recognized the need and convinced U-Haul to help.

“We gathered water for a week straight and donated 307 cases of water to Flint, a total of 7,675 pounds of water,” she recalled. “As we dropped off the water, Flint residents were coming in car loads picking up cases and filters. We could not have done this without the donation of U-Haul.”

Fayon Jones, an operations manager for a retail store in Tallahassee, FL, decided to interrupt her busy life to help the people of Flint. Saddened by news of the suffering, the single mother of five discovered via Facebook that a grassroots Atlanta group had formed to send bottled water to help quench the crisis and decided to launch her own local effort, dubbed Tally for Flint.

“I posted on my Facebook page, ‘Hey, Tallahassee, let’s do this!’” Jones recalled. “Then I thought, OK, so where am I going to put the water?”

She discovered the answer at Orange Avenue Self Storage in Tallahassee, and found a kindred spirit in manager Theresa Fulsom.

“For about a month when I couldn’t be there, Theresa was taking donations for me at her office,” Jones said.

Jones flew to Flint on her own dime to determine a destination for the flood of donations. She found a great fit at Triumph Church on the north side.

“That community is one of the less-affluent communities, so they don’t have access to some of the other drop-off points, such as the fire department or health department,” Jones said.

Have Water, Will Travel

But getting the water there was problematic. A local Pak Mail franchise came to the rescue, picking up the tab for a 53-foot trailer truck to haul 26 pallets of water from Orange Avenue Self Storage to Flint.

“The truck arrived March 4th and the water was gone that weekend,” Jones said. “I still have the storage unit and I’ll keep it there as long as people want to donate and we’ll figure out how to get it up there as we go along.”

“Moving water is expensive. Having a good water system in place, you don’t appreciate it until you don’t have it,” Laragy said.