Not so fast Nic Cage.

Written on parchment — or animal skin – the original copy of the Declaration of Independence is encased in a titanium and aluminum frame and secured behind bulletproof glass and plastic laminate. Each night the Declaration is lowered into an underground vault.

“It took five years and $5 million to come up with the current encasements,” said Miriam Kleiman, program director for public affairs at the National Archives and Records Administration.

The Declaration is kept with two other key documents — the U.S. Constitution and the Bill of Rights — in the rotunda of the National Archives Museum in Washington, D.C. Together the documents are called the Charters of Freedom.

In celebration of Independence Day, we take a deep dive look into the science and technology behind storing America’s most sacred document—and the history behind its safekeeping. 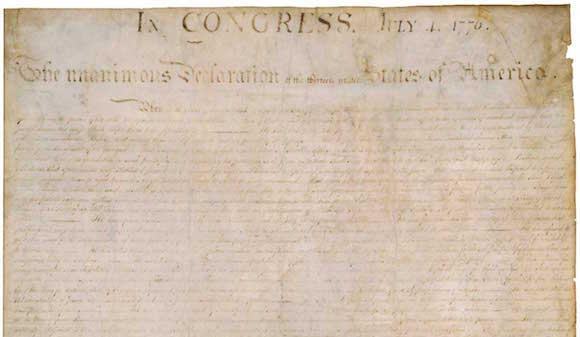 In 1987 the NARA installed a $3 million camera and computerized monitoring system. It was designed by the Jet Propulsion Laboratory to monitor the condition of the Charters of Freedom.

The system warns archivists about changes in readability due to ink flaking, changes in document dimensions, or fading. It’s capable of photographing one-inch square areas of the documents and retaking the pictures periodically to make sure that nothing has changed.

Measurements are compared to a baseline image to detect changes not visible to the human eye. Because the ink on the Declaration has faded badly, tourists aren’t allowed to photograph the light-sensitive document, Kleiman says. The glass filters out damaging ultraviolet light.

Inside the case that holds the Declaration, “they have created a microclimate that is without oxygen,” said Laura Moeller, owner of Strange Stock Art Conservation in Alameda, CA, “They believe the absence of oxygen is the best thing for that piece. ”

Oxygen and humidity are the enemies when it comes to preserving parchment, Moeller explains. Even the moisture from human breath could damage the document over time, she notes.

Security around the Charters of Freedom exhibit has intensified since the attack on the World Trade Center on Sept. 11, 2001, Kleiman adds. For reasons of security, details about how the documents are insured aren’t discussed publicly, she adds.

Despite heightened concerns, the Declaration and its companion documents remain very public, with about 1 million visitors to the rotunda each year, Kleiman says.

What visitors see are documents faded by both time and wear. During the Revolutionary War, members of the Continental Congress carried the Declaration of Independence with them as they evaded the British. Each time the document was unrolled and rolled again, the surface likely was damaged.

The document was further damaged when members of Congress decided to make several copies. This involved placing moist paper on the original to soak up ink, Moeller says. The copy then was transferred to a copper plate that could be used to make duplicates.

One challenge for modern-day preservationists is protecting the remaining ink on the Declaration. –so-called “iron-gall” ink.

“One of the main components of iron gall ink is iron salts and tannic acids, which are detrimental to parchment and paper,” Moeller says.

John Davis, lead conservator and owner of the Los Angeles Paper Group, says one thing NARA preservationists have on their side is the high quality of parchment in the 1700s. In that era, parchment and paper were made by hand. Parchment intended for important documents was of especially high quality.

Signed in Philadelphia in 1776, the Declaration has had many homes. On December 12 of that year, it followed Congress to Baltimore, carried in a horse-drawn wagon. It remained there until its return to Philadelphia in March of 1777.

The NARA says that for the next eight years the Declaration made its way to such cities as Lancaster, PA, York, PA Princeton, NJ, Annapolis, MD, and Trenton, NJ. In 1785, when Congress met in New York, the Declaration was housed in the New York City Hall, where is believed to have remained until 1790.

It was returned to Philadelphia when that city became the nation’s capital in 1790, traveling by boat. It remained there until 1800 when it was sent again by boat to the new capital of Washington, D.C.

The Declaration then was stored in several buildings near the White House. In 1814, during another war with Great Britain, it was moved to a private home in Leesburg for protection. When it returned to Washington, it was housed in various buildings until 1841, when it was transferred to the Patent Office Building. Unfortunately, it was hung in direct sunlight, which contributed to ink fading.

In 1876, the Declaration traveled to Philadelphia, where it was temporarily on exhibit for the Centennial National Exposition from May to October. In 1877, the Declaration was moved to the State Department Library.

According to the NARA, in 1921 President Warren G. Harding issued an executive order authorizing transfer of the Declaration to the Library of Congress. It was carried there in a mail wagon, cushioned by leather mailbags. Initially it was placed in a safe, but in 1924 the Declaration was moved to a frame of gold-plated bronze doors and covered with double panes of plate glass. Gelatin film was placed between the planes to filter out light.

Fort Knox and Beyond

After the Japanese attacked Pearl Harbor in December 1941, the Declaration was temporarily moved to heavily guarded Fort Knox in Kentucky for safekeeping. Secret Service agents escorted the Declaration on a train ride to the fort. In 1944 it was returned to the Library of Congress.

In 1951 the Declaration was placed in a thermopane enclosure filled with humidified helium. This protected it from both ultraviolet rays and air pollution.

The document, along with the Bill of Rights and the Constitution found their way to their present home in 1952. Twelve members of the Armed Forces Special Police carried the documents encased in helium-filled glass cases and wooden crates down the Library of Congress steps.

After all of its travels, it’s amazing that the Declaration has survived to be viewed today by tourists, Moeller says. “It’s incredible.”