Moving is a tedious chore, but you can make it much easier and loads more fun by booking a sexy moving company.

Yes, sexy moving companies do exist. In fact, it’s becoming increasingly popular to hire hot movers, says Jordan Kavoosi, who came up with the idea for his company, Shirtless Movers, five years ago.

Some satisfied customers call the company again – and again and again. Shirtless Movers is moving one woman for the third time, this time from Arizona to Texas.

“She loves the whole buff guys thing and also that we’re really friendly and do a great job,” Kavoosi said.

Word spreads fast. During her last move, that customer snapped a shirtless photo (above) of Kavoosi and another mover, a former model, and posted it to Facebook where one of her friends spotted it, liked it and grabbed the phone to book a move.

“Within 30 seconds my phone was ringing,” Kavoosi says.

And there are plenty of other manly movers looking for work. Here are six sexy moving companies across the country:

This junk removal and moving company, which has locations across the United States, got its sizzling start on a summer day in 2003 when a group of hunky college buddies borrowed an old cargo van to do a moving job. To these movers, being hunky is about more than being hot: they’ve made H.U.N.K.S. an acronym that stands for honest, uniformed, nice, knowledgeable service.

Vote now for Hunk of the Year! The winner receives an all-expenses paid trip to Tampa plus a $500 scholarship check! https://t.co/ZpVphQazqu pic.twitter.com/2VnxIpkXZv

Another one of their attributes: a willingness to do almost any job. The company offers an array of services, including including junk removal, moving, light demolition and home staging. The company, according to its website, was “designed with the ladies in mind.”

If you want movers who look like they spend much of their spare time hitting the gym, Muscular Moving Men could be your company.

Their slogan is “Outstanding service, competitive rates, muscles for a move made easy!” Since you’re trusting movers to haul around your prized possessions, it’s probably smart to make sure all your stuff, from grandma’s china to your baby grand, is in strong hands.

Meathead Movers got its start back in 1997 when two high school students had trouble finding part-time jobs due to their busy schedules in high school sports.

Brothers Aaron and Evan Steed got their company name from the fact that they spent most of their free time pumping iron. Back then they charged about $20 and a pizza for a day of moving. Now, Meathead Movers’ crew is made up of professionally trained “strong, clean-cut student athletes” who attend local colleges. The company offers a variety of services, including free moving concierge services and packing by Princess Packers, also college students, who offer “a woman’s touch while packing up your treasures.”

The name Strong College Students suggests movers who’d be easy on the eyes, but that’s not the company’s aim.

“We focus on knowledge and education over any physical attributes,” said Shaun Robinson, who founded the company when he was a college student at the University of South Florida. The company is expanding through franchise locations in Texas and other states.

“We don’t push the marketing component of us being young and attractive,” Robinson said

However, Strong College Students employs local college students who have passed a physical assessment, mainly to test their stamina and ability to stick with a job to the end.

“For us, strength isn’t just physical — it’s strength of mind, which is even more powerful,” Robinson said.

If you think protection is sexy, you’ll love the New York moving company Dumbo Moving + Storage. The company’s sexy ad showing a shirtless man unbuttoning a woman’s blouse with the tagline “Always Have Protection” was banned from the New York subway. 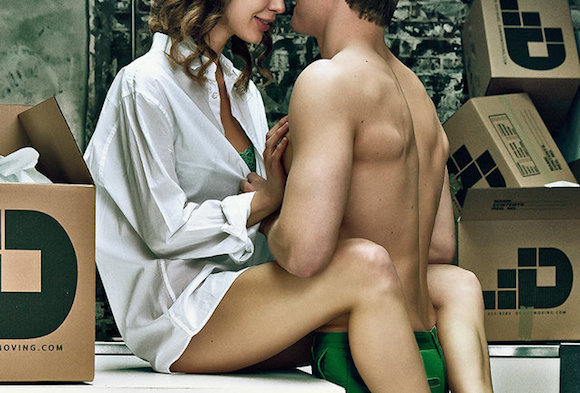 When the company fought back by putting the ad on their own moving trucks, they got angry calls from offended rabbis and then found a vandal had covered the ad in drab gray paint while a truck was parked near a move site. The ad was meant to highlight the importance of protecting your stuff — during a move, of course, the company said in a press release.

And of course, there’s Kavoosi’s company, Shirtless Movers, a Minnesota moving company with a second location in Arizona, that bills itself as the “World’s first official shirtless moving company.” The company also offers other services, including storage.

If you don’t want your movers to show much skin, that’s OK. Shirtless Movers lets the customer choose shirts on or off. In shy Minnesota, 99 percent of customers want shirts on, but in laid back Arizona about half want to see pecs flex during the move.

The shirts off option is good for people “who really want to have a cool, fun experience when they move,” Kavoosi says.