A storage unit is a place to stash your stuff. You know, things like furniture, clothes, childhood toys, VHS tapes you swear you might watch again someday, and so on.

But some people take the privacy provided by three walls and a roll up door a little too far.

SpareFoot recently surveyed our clients for stories about the most extreme and inappropriate things they have ever discovered tenants keeping in a storage unit— or at least tried to keep. 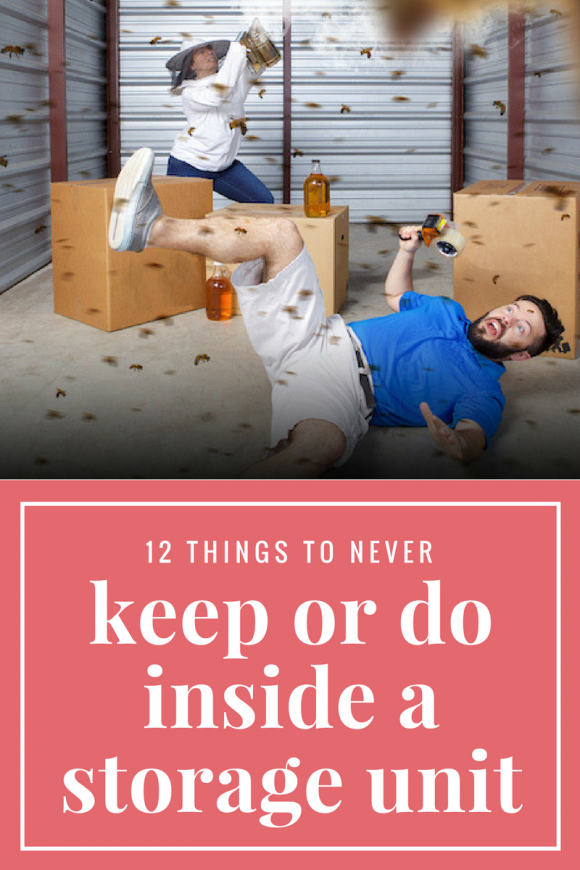 Several common themes emerged, and the result is the definitive list of twelve things that just don’t belong in a storage unit. We used the suggestions to create our 2017 Client Calendar, featuring our own SpareFoot employees recreating these self-storage no-no’s below:

While only one storage manager mentioned drug dealing and drug paraphernalia, we’ve read enough news stories on the subject to know that using storage units as a makeshift drug lab/warehouse is an all too common occurrence. Not only is it illegal, but a lack of proper ventilation makes a storage unit a less than ideal place to manufacture methamphetamine. Wannabe Walter Whites ought to find another place to hang their hazmat suit.

Loretta Harris of Elliott Road Self Storage in Newberg, OR had a tenant who wanted to store a working Civil War-era cannon along with its “explosive” supplies. That was a no go. Facilities have varying policies on storing guns and ammo, so tenants should always double check with a manager before storing any such items.

While we are on the topic of activities enjoyed by rugged outdoorsmen or survivalist types, here is another doozy from Dave Rothman of Zippy Shell of Greater Columbus Ohio:

“An outdoorsman name John, asked if Zippy Shell would store 20 to 30 opened 50-gallon barrels of dead fish bait, until bear hunting season. On hearing this, we of course thought he was joking, and indicated that we could not store dead, rotting fish due to the health concern and obvious smell. He was disappointed, as apparently everybody that he had reached out to was also not willing to store his rotting fish bait.”

Generally speaking, storage facilities don’t permit any kind of active uses on site. Some will allow bands to practice or people to practice quiet hobbies, but a fight club? Not a chance.

“I had a guy ask to rent a 20×20 unit so he could put an MMA-type ring in there and have a fight club. He actually used the words “fight club” in our conversation,” said Brenda Morris of All Storage in Ft. Worth, TX. 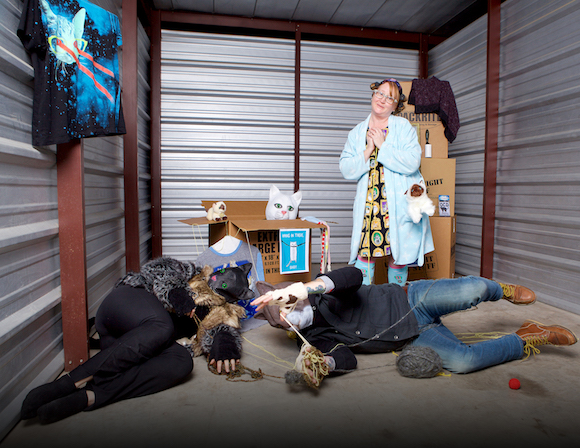 Keeping a pet in a storage unit is obviously an act of cruelty, yet it still happens (and it breaks our hearts). Even if the tenant is regularly feeding and watering the animals, locked inside a cramped, dark storage unit is no place for any pet.

Bill Burson of Money Saver Mini Storage in Anacortes, WA reported finding seven cats in a storage unit that had been left there for a week. The morale of the story: if you can’t keep your pets at home, or with a friend or family member, do the right thing and take them to a shelter—not a 5×5.

Brian Scot of Brown Storage in Dayton, OH spotted some college students piling into a storage unit and closing the door behind them to engage in “extracurricular activities.”

While we can only imagine exactly what that entails, let’s just say a storage unit is not suitable for an off-campus doobie circle or a full-blown kegger. Party hard somewhere else. 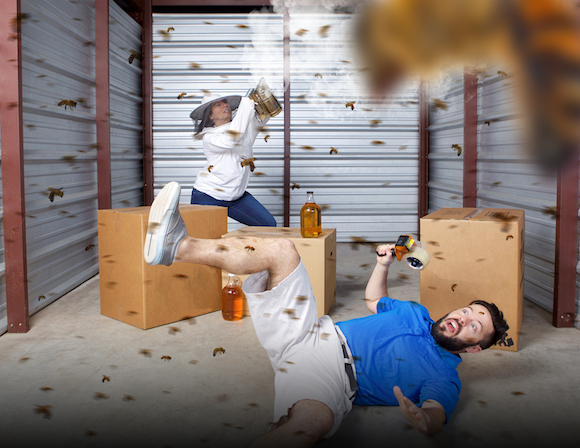 A manager at AAA U-Lock-It Self Storage in Albuquerque, NM told us that she had a man ask if they could store live bees and a hive inside of a unit. While this doesn’t seem as cruel as keeping a dog or cat in a unit, we can’t help but think of the many, many ways this could potentially go wrong. Can we keep self-storage free from swarms of angry cooped-up bees stinging everything in sight please? Thanks.

Dead bodies aren’t the kind of thing you would expect a tenant to ask if they can store, but you’d be surprised.

“I was asked if we could store cadavers. Unfortunately, as I explained to the caller, as much as we would love to store the cadavers, we sadly do not have climate controlled units,” said a manger at a storage facility in Modesto, CA.

Sadly, many corpses that are discovered in a storage unit are the result of foul play, like one found a facility in Austin, TX:

“Wife prepaid 12 months rent, moved and did not give forwarding address. We sent notices and auctioned off contents. When wardrobe was opened, there was the wife’s husband in a body bag packed in a stand up wardrobe,” said Grantland Cohen of A Space Place.

Hosting a fight club or storing animals are bad enough on their own, but combining them is even worse.

“I went to check on some tenants moving in they were trying to arrange and move in an array of cages, supplies and roosters for “show” and fighting,” said Scot of Brown Storage in Dayton. “We quickly let them know they could store supplies and cages but no food or live animals.” 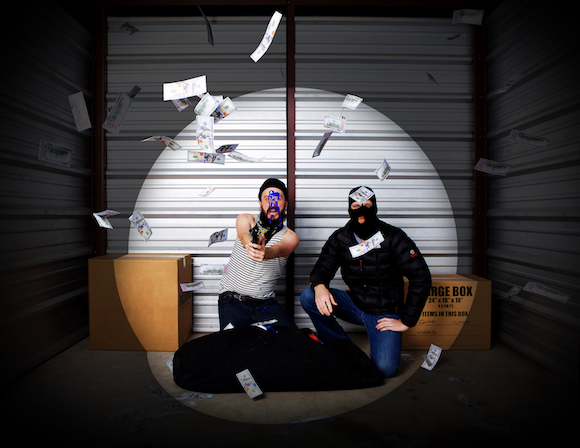 A storage unit might seem like a great place to stash your robbery haul, but a storage manager won’t hesitate to roll up your door when law enforcement shows up with a warrant.

Stolen cash totaling $2 million was recovered from the trunk of a car being stored at A 1 U Store It in Spanish Lake, MO. The loot was part of $6.6 million haul connected to a 2001 Brink’s robbery in St. Louis.

Yvonne Andrews from AllSafe Self Storage in Virginia Beach shared a similar story:

“A large grey metal box locked. Opened the box and found several hundred thousands of dollars, unmarked. Called the police. As it turned out, the owner of the locker was in jail, wanted for robberies along the entire East Coast of small mom-and-pop stores. He was caught and arrested. The locker was in lien status being auctioned.”

Why do so many people like to get freaky inside of self-storage units? I don’t know, but boy do they.

“I had this very prim, proper older English lady, tweed jacket and all, that called to say she had movers vacate her unit, and when I went to check that it was all cleaned out, there was a bondage chair in the middle of the unit,” said a manager at a facility in Buena Vista, CA.

And this from a facility in Orange County, CA:

“I had a gentleman in his 60s who always came to the facility dressed as if he was going out on the town. I was impressed that he always took the time to look good. Then I found out he was taking women to his unit to have sex with. I told him that is not allowed on facility grounds and he moved out the next day.”

Jo Ann Peters from A-American Self Storage in Buena Vista, CA had quite the shock when her facility opened a particular delinquent unit.

“We cut a lock on a unit and found a 25-gallon aquarium with a boa constrictor, about 8 feet long, still alive!” Peters said.

Fortunately for the snake, the story has a happy ending.

“An auction buyer that loved snakes bought the unit.” 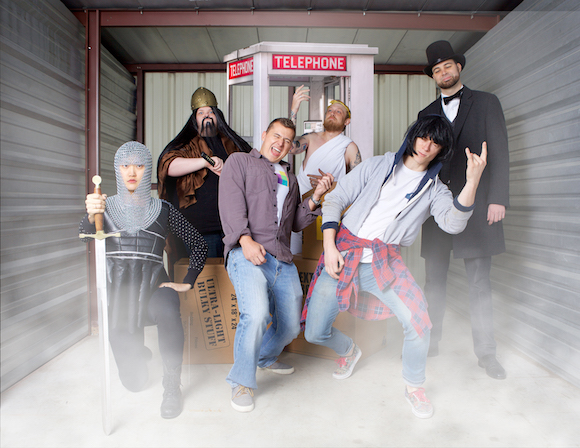 This was a bit of a stretch, but at least its entertaining. From Joe Senter of Stor All Storage in Pisgah, OH:

“The weirdest thing that someone wanted to store here was from a guy we’ll call Sigmund Hinkley, an experimental physics professor from Duke University. He said he was storing a portable TIME machine. I told him, “Yeah…okay, sure,” and handed him his lock and lease, thinking this guy was a real piece of work. He vacated two months later without notice, which didn’t surprise me because of how flighty he had acted from the get-go.

A week later I was at a Laurel & Hardy film festival in Cincinnati, in which films from the silent movie era were screened. About half way through the event, the film “Love ’em & Weep” was shown, and I nearly gagged on my caramel corn.

There on the grainy black & white screen was Stan Laurel, Oliver Hardy, and…holy smokes!… SIGMUND HINKLEY! The film credits said “Siggy” Hinkley but clearly it was him…in a 90-year-old movie, looking exactly the same as when I’d seen him in person last month. The only possible explanation: Hinkley really DID have a time machine!”

We’re not buying it, but the amount of radioactive material likely required to power a hypothetical time machine surely is not safe for storage.