If you’ve been procrastinating about getting your dog or cat microchipped, these fur-raising stories of pets lost during a move should convince you to get that chip right away.

Fortunately, these pets all made it back home. But not before they had a few adventures along the way. 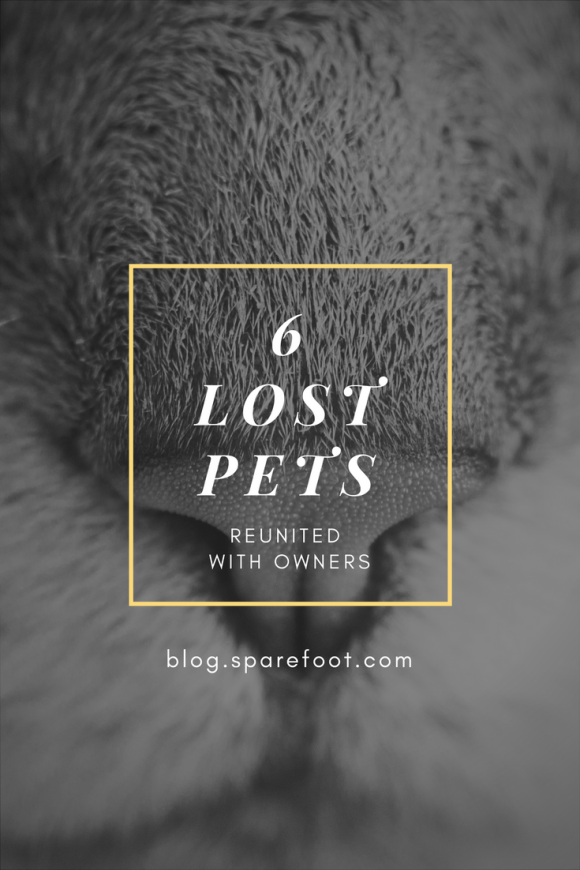 Mee Moowe the cat slipped into a moving box while workers packed up Ashley Barth’s home for relocation from Suffolk, VA, to Hawaii in 2014, according to WAVY-TV.

Mee Moowe was trapped in a moving box, anemic, skinny, and with her eyes crusted shut. She survived after being rushed to the vet. Reporters at WAVY-TV checked with two veterinarians on how Mee Moowe could have lasted a month in a box.

“While both say it’s not likely a cat could survive without food or water for 36 days, they said it’s not impossible,” according to WAVY-TV.

Survival chances depend on the cat’s health before it moved, the amount of humidity and temperature inside the box, the vets said.

Tiffany Boble’s 35-pound terrier-mix Mia bolted from a hotel room when someone opened the door while she and her husband stayed overnight in Trussville, AL, during a cross-country move to Valdosta, GA. The couple looked all night for Mia but the next morning, the pooch was still missing.

Tiffany’s Facebook posts about Mia soon caught the attention of a posse of animal rescue ladies. Someone had already spotted Mia eating trash from a neighbor’s yard. The women spread more trash around the lawn and drizzled chicken grease on the grass.

“Someone brought a Chick-Fil-A,” says Tiffany.  “Everyone set water out. All these people came together to help us.”

Eventually, the team lassoed Mia with a leash after she fell asleep, exhausted, on a patio chair. Tiffany  drove back five hours to Trussville to get her dog.

“We got out of the car and she was so excited to see us,” says Tiffany.

When indoor cat Hex slipped out the door during a move in Rochester, NY, she was gone for a month until jme Thomas’ intuition prompted her to renew a lost pet ad. Jme looked for Hex for around four weeks and then let the ad lapse. However, she renewed it the next day.

“I decided I would try one more time,” says jme.

The day the ad reappeared, a woman  called and said she had Hex.

“When I saw her, she literally fell over into my arms. She was so thin. Her feet were worn,” says jme. “We think she was picked up and driven somewhere and spent the rest of the time trying to get back. She was 10 miles away and across a few highways.”

4. Social Media to the Rescue

When Amber McFadden of Columbus, OH, returned to her former apartment a few days after moving, she opened the door to find that the roommate she’d left her six-month-old Great Dane Viggo with had moved and Viggo was gone as well, according to The Dispatch.

Amber put the word out about her missing dog on Facebook and the next day received a text that someone had seen Viggo at a local veterinary clinic. Amber’s boyfriend drove to the clinic and confronted a guy holding Viggo’s leash who falsely claimed he’d bought the dog. After a tense  exchange, the man turned Viggo over.

“I had been planning to get Viggo microchipped, but kept putting it off, ” Amber told The Dispatch. “I’m lucky.”

A few weeks after Ryan Messenger of Shawnee, KS,  moved to a new home about a mile away, his indoor/outdoor cat, Cotton, disappeared and was gone for a month. Ryan’s former neighbors told him they’d seen Cotton, still prowling the neighborhood.

“I found her at the original house, sitting in the driveway like she always did,” Ryan told SpareFoot.

A few weeks later, Cotton bolted through an open door, disappearing again, this time for three months. Great Plains SPCA called Ryan after scanning Cotton’s microchip. Someone  had rolled up to the rescue organization and tossed Cotton out the car window.

“I think she went back to the house a second time but someone took her in at night,” says Ryan. “She’s an indoor cat now.”

Bogie, a blue-eyed Siamese from Hawaii, was lost when he got loose in 2015 in the cargo hold at Honolulu International Airport during his family’s move to Detroit. Nearly two years later, a man who tends feral cats around the airport snatched Bogie up, and a microchip scan at the vet reunited Bogie with his family.

“I honestly didn’t think that we would ever see him again, so now that we do get to see him and he gets to be reunited with the family, it’s amazing,” Bogie’s owner told WXYZ-Channel 7.