If you’re worried about how to get your boa constrictor from one coast to the other when you relocate, just imagine having to move a couple dozen snakes at once.

That’s the situation Janna Shepherd, executive director of Reptile Rescue Center in Little Rock, AR, found herself in a few years ago when she relocated the reptile rescue headquarters from Conway, AR to Little Rock, about an hour away.

Shepherd had to move around 50 reptiles, a cargo comprised of leopard geckos, a smattering of turtles and around 25-30 snakes, including ball pythons, boa constrictors, corn snakes and king snakes.

Plenty of snakes surrendered to Reptile Rescue Center arrive from owners who don’t know what to do with their snakes when they relocate, says Shepherd. You don’t have to give up your beloved snake when you move, though.

“We had a pretty seamless transition because I planned ahead,” says Shepherd.

If you’re on the hunt for snake-moving advice, slither through these tips to make sure your pet snake arrives safe and healthy in your new city. 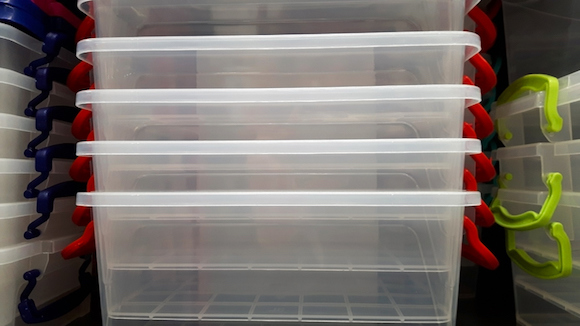 Transport in a Separate Enclosure

Don’t move your snake in her usual terrarium or snake cage. A heavy item in your packed car could fall on the glass container and break it and the sun can beat brutally through the glass. Shepherd recommends using a plastic storage container. Poke nail-size holes in the lid (before you put the snake in) so the snake has enough oxygen. Don’t make the holes too big, though. A corn snake or king snake can easily fit through a quarter-sized hole and get loose in the vehicle.

Scale Back on Feeding

Don’t feed your snake for two or three days (depending on the species) before you hit the road. That’s because snakes digest slowly, and you don’t want undigested food in the snake’s stomach for the trip.

If the snake is not on a heat source while traveling, it can regurgitate, which is unhealthy for snakes and can even lead to death.

“That’s a health issue you don’t want to have to deal with,” says Shepherd. 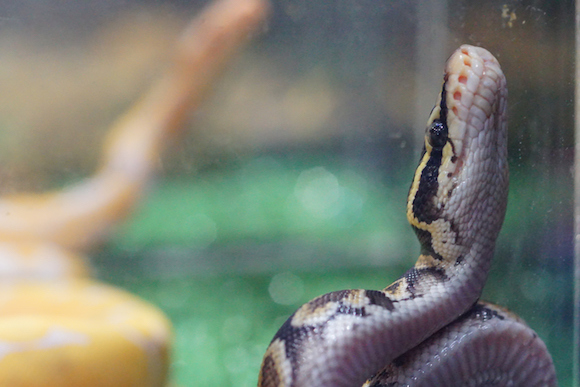 “The biggest thing to worry about with snakes and moving is reducing the snake’s stress,” says Shepherd.

A stressed snake may become hyper-alert, squirming around a lot or pushing at the lid of its container, trying to escape. Recognizing the snake’s stress level really comes down to knowing your snake’s disposition. If your normally outgoing snake suddenly becomes aggressive or hisses, it’s stressed. To enhance the snake’s sense of security in the plastic container, try placing your pet in a cloth snake bag  made for transport.

You may need a heat source for the snake to coil on, depending on the climate. If it’s really cold, you can use hand and foot warmers sold at retail stores. At the same time, be cautious of overheating.

“If it feels too warm to the touch to you, it’s too hot for the snake,” says Shepherd.

Make sure the snake’s container is large enough that it can move away from the heat source if it gets too hot.

It’s illegal to own vipers, cobras, pythons, anacondas and many other snakes as pets in New York City. The Lacey Act, a federal law, prohibits some snakes, including the reticulated python, DeSchauensee’s anaconda, green anaconda and Beni anaconda from being imported into the U.S. or transported across state lines. Check your travel route and destination cities and states for snake regulations.

Be Upfront with Hotels

Some hotels will accept snakes, according to Shepherd, who talked an extended stay hotel into allowing her to bring in a bunch of reptiles and snakes when the power went out one winter at the rescue. If you have to stop overnight, plan ahead, book in advance and make sure your reptile is welcome “so you and your snake don’t get kicked out,” says Shepherd.

Give Your Snake Some Space

When you arrive at your new place, set up your snake’s cage or enclosure right away and then give your snake some elbow room. Leave him alone and don’t handle him for a few days.

“To your snake, it’s a stressful situation,” says Shepherd.

Disclaimer: We are a participant in affiliate advertising programs designed to provide a means for us to earn fees by linking to affiliated sites.

40 Eco-Conscious Actions to Add to Your Daily Life

How to Store a Boat Long Term

How to Store a Mattress the Right Way

11 Dangerous Spring Cleaning Jobs and How to Protect Yourself