Halloween costumes are great fun for the entire family, but typically that fun is fleeting—only lasting one day a year.

A lot of times we find ourselves shopping for a costume for Halloween and settling for a third or maybe even fourth choice because we have a hard time justifying the cost of our favorite for only one time wear. With the overall quality of Halloween costumes going up every year, what we used to think of as a yearly flash-in-the-pan has become an outright pass-time.

Whether your interest lay in fantasy, charity, fandom or just making a few bucks on the side, Costume SuperCenter, an online Halloween costume store, has 14 great ideas of what you can do with your Halloween during those other 364 days:

1. Resell it on eBay

It might sound obvious, but a lot of times people underestimate the size of the market when it comes to second-hand costumes. As you will read later, there are many different groups always in search of new and affordable costumes. By listing your one-time-use Halloween costume on the trusted auction website, you stand a very good chance at recouping some of the cost of that dream costume, or maybe even profiting a few dollars off your more modest selections. Why have something taking up space in a closet or folded away in a seasonal box when it could be paying for itself? Also, when you begin this cost deferment way of thinking, your feasible costume options will become bigger and way more fun!

Is your family brimming with creativity? Hold on to your Halloween costumes and collect them in a costume storage closet, so your family can start making short films with an ever-growing wardrobe of costumes, props and accessories. Make a weekend project out of writing, filming and editing your own mini-movies to post on Facebook, Instagram or wherever you want to share your family’s wackiness. As your costume options grow, so will your ideas and the effectiveness of your families creative vision. And as an added benefit, your Halloween costumes will be made more vivid and unforgettable when you add pieces from your accumulated closet.

3. Do the Monster Mash: Merge Two Halloween Costumes Together Into One

Aside from being a graveyard smash, it’s also a great way to save money and make an unforgettable costume that you’re guaranteed to be the only one wearing. Here’s an example: this year I’m going as Frankenstein. Next year, I may go as Dracula. But if I save the other costume, now I have the option to go as Frankula– a being even more terrifying than you can imagine. This also opens you up for otherwise unseen superheroes such as Iron Bat, Super Groot, and Spider-Man but he’s a Jedi. The costume mashup possibilities are endless.

Costumes and dressing up are a great way to get a little escape. Donating your costumes to Children’s Hospitals can help give a child a little bit of that escape and a smile at a time when they could really use it. It’s harder to be scared when you’re Power Ranger, and you never feel stronger than when there’s a big red cape on your back. Something that simple can give a fighting kid a mental edge. Donate to hospitals or other organizations’ Halloween Costume drives in your area such as Jersey Cares, Interfaith Social Services or Chapman Partnership. Or…

If your costume buying is exclusively in adult sizes, and you have a flair for the theatrical, take your Batman, Superman, Wonder Woman… etc, costumes to an organization that arranges visits for hospitalized children by costumed heroes and personalities. You will actually get to see what before was just a fun Halloween party obligation, is now brightening up the day of a child who will always remember the day Spider-Man came to visit.

While we’re on the subject of superheroes, comic book conventions are teeming with them. If you find yourself with an awesome Guardians of the Galaxy or Powerpuff Girls costume come Halloween, hold on to it until your next local Comic-Con. Now, your convention time will go from a large-scale retail experience to more of a red carpet, with people wanting pictures and mingling with those of like mind and similar costume. Join the ever-growing culture of cosplayers and enjoy your comic book conventions on a newer and more immersive level. And don’t be bound by the source material, be creative and put your own unique spin on your favorite characters.

7. Protect Your City as a Masked Vigilante

Just kidding! That’s both illegal and dangerous for an array of reasons…. I’ll move on.

8. Trade Costumes With Your Friends

Make your money go twice as far when you and a friend trade costumes every other year. Make a fun trip out of shopping for your pair of costumes as you both prepare for this year and eagerly await next year! I suggest choosing two costumes on different ends of the spectrum so that you maximize your effect both years. If this year, you’re a zombie and your friend is an Angry Bird, next year you don’t have to worry about having a similar vibe to your Halloween outfit. This is also a great way to take your children’s Halloween budget a little further. Have your kids trade costumes and all of a sudden there’s that much more money to spend on candy.

Are you looking at a shelf full of Pirates of the Caribbean DVDs and an empty social calendar? Throw a themed screening party for your friends and have everyone come as their own rough and tumble pirate. Have everyone over to binge-watch Game of Thrones, but everyone must be adorned in the garments of Westeros. With a little planning ahead, your costume saving will make sure that you’re the host with the most.

Sometimes, simply modifying a Halloween costume can give you a head-turning and clever outfit to wear when rooting on your favorite team. This year’s Marvel Comics Wolverine costume is even more awesome when the X on the chest is replaced with a blue M. Now you are the University of Michigan Wolverine! With just one costume choice you are now the thing jumbotrons were made for. And it doesn’t even need to be that specific. Cutting off the ears of a Batman cowl makes it essentially a blank slate for a costumed team mascot of your own creation.

A personal favorite, you can use your old Halloween costume and an easily frightened or gullible friend to make a YouTube video that can stand a chance of going viral. The beauty of this classic and simple plan is that no one is expecting your bloody and gnarled werewolf in the middle of July at their apartment. Suspicions will be down, as will their guard. Set your camera up in a hidden but advantageous place, and lead your friend into a fright that will give a preserved and priceless memory. Have fun—just be forewarned, a surprising amount of people’s first reaction when scared is to throw a wild punch. But that might actually make a better video.

12. Roleplay in the Bedroom

Sexy costumes are a Halloween staple and big fun at parties, but the fun of that costume can continue even longer when it’s used in a more…intimate setting. Learn more about your partner and take your time together to another level when you wear last year’s sexy nurse or sexy sea captain costume to bed. It’s fun. It’s alluring. And it’s just another way that a forgotten Halloween costume can be a hidden treasure.

13. Play Pretend With Your Kids, Nieces and Nephews

Having dress up and pretend time with your kids is a fun, simple and stress-relieving way to unwind and expand your child’s creativity. Put on last year’s Halloween costume or an amalgam of past costumes and challenge your child to come up with a story that you must act out. They create the character. They create the backstory and the plot. You just provide the costumed silliness, and your kid will be excited and on the floor laughing.

Costume swaps are the new and green way to spread resources used to make costumes and provide people with high-quality low-cost Halloween costume options. You can make your own by organizing families in your neighborhood, or you can attend large-scale annual swaps which are typically around the second Saturday in October. A very large number of styles and sizes are usually available with this fun and friendly form of recycling.

Have fun this Halloween, and remember that trick or treating is one night a year, but the joy of costuming and dressing up is much more. 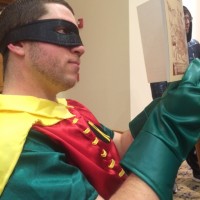 Asher is the marketing manager at Costume SuperCenter. He has a passion for all things superheroes and loves costumes.
Website