Might the everyday items around us be haunted by spirits from the past?

If you’re one of the legions of sentient humans who have experienced such paranormal encounters with otherwise inanimate objects, the answer is unequivocally yes.

A scientific curiosity about her own experiences with possessed possessions prompted Washington, D.C. paranormal investigator Stacey Graham to model a career on the unexplained, resulting in such books as Haunted Stuff and The Girls’ Ghost Hunting Guide. Her conclusion?

“Any item can be cursed or haunted, so there’s no particular way to tell one by sight. However, some people may be able to pick up on certain memories or feelings when they touch the object, so strong emotions, visions or smells can come through after handling it,” she says. “I find reasonable explanations 99% of the time, but it’s that 1% that keeps me waiting… and watching.”

Once haunted, can an object be freed of its curse? Absolutely, according to longtime ghost hunter Christopher Balzano, who co-wrote Haunted Objects with Tim Weisberg, creator and host of the popular paranormal radio show, Spooky Southcoast.

“For the majority of haunted objects, it’s almost as if a clock is ticking with them; they were able to attach themselves with something because there was a great passion, almost as if they have a mission to communicate something to the living. But once that mission is complete, it kind of fades away,” he explains.

Ready for some goosebumps? Here are 7 tales of haunted stuff to ponder.

The 1955 head-on collision that killed iconic Rebel Without a Cause star James Dean unleashed an urban legend that Dean’s Porsche Spyder 550, nicknamed Little Bastard, emerged from the crash haunted.

According to legend, when the rebel’s ride was purchased by car customizer George Barris, his mechanic was seriously injured offloading it. Barris allegedly sold off the parts, and that’s when things turned deadly. First, two Beverly Hills doctors got into an accident with each other, killing one of them, shortly after repairing their own cars with pieces from Little Bastard. Then another man died when the tires from Dean’s Spyder that he installed on his car exploded on the first outing. Legend also has it that a similar fate befell the driver of an 18-wheeler who finally relieved Barris of the rebel’s last ride. 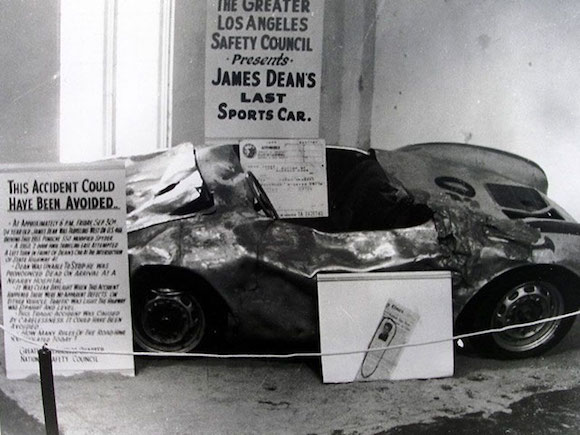 “These stories become iconic because they happen to icons or during important moments in history, and the haunted vehicle becomes as famous as the main character,” says Balzano.

This Lord’s Prayer Really Stayed with You

When Balzano was researching deep-woods occult activities in the Massachusetts village of Freetown, an investigator loaned him police files and a curious piece of poster board from the 1970s. On it, a teenage vandal had inscribed the Lord’s Prayer, written backwards in his own blood, as part of a bloody desecration of the town’s nativity scene.

If Balzono had only known what lay ahead, he might have given that board away as well.

“I could not keep that poster board hidden. No matter how many times I put it away, even locked it away, it would appear, in my living room, in my bedroom. Several times it appeared with a knife through it,” he says.

When he stashed it under the bed, he and his wife had horrible nightmares. When they rented a POD for their home move, the board would magically surface on top of whatever they were looking for. But when he mailed it back to the investigator, an even stranger thing happened.

“He called and said the poster board never made it there,” Balzano says. “I sealed that package and he knows for a fact that that seal wasn’t broken when he received it, yet ‘Our Father’ written in blood found its way out. Who knows where it is; it hasn’t shown up since.” 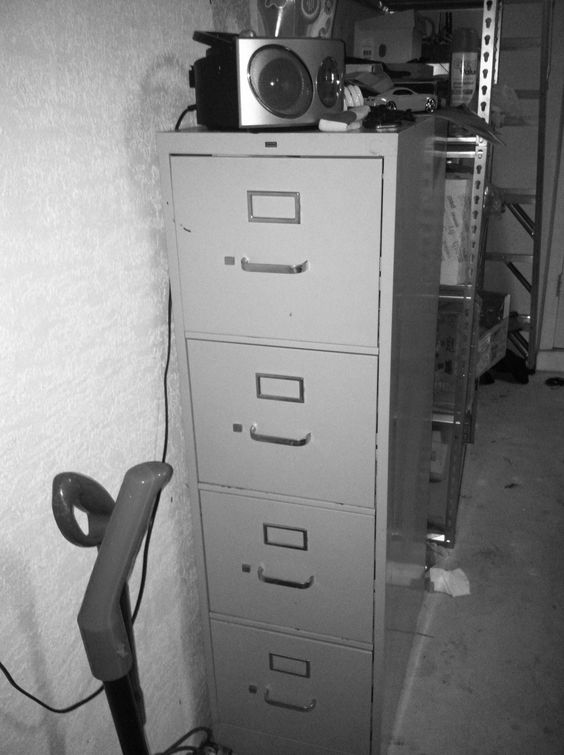 File This Cabinet Under H for Haunted

Alice doesn’t know why she bought the ugly filing cabinet at that yard sale a few years ago. She didn’t need one, much less this sorely-worn mess. But for $5, she could return home with something.

Unfortunately, her car stalled on the way home. And when her husband arrived and put the cabinet in his truck, it wouldn’t start. Once they got the cabinet home, Alice started having weird repetitive dreams about a ‘60s-vintage Donna Reed lookalike trying to start up conversations with her in her kitchen. Then she started seeing the woman in the house when she was awake. The guest soon led Alice to the filing cabinet, where they found a New York birth certificate for a woman simply named El, born in 1941. 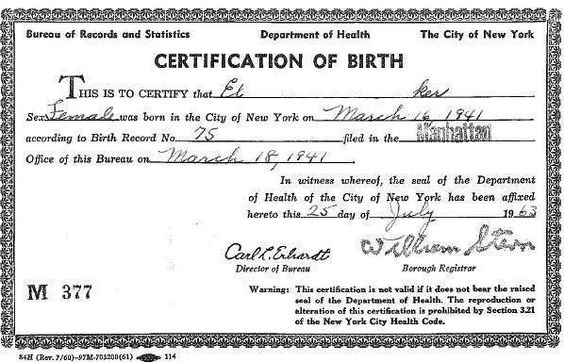 Alice carried the birth certificate back to the yard sale house, but the frightened owner said the cabinet had come with the house. Alice spent the following week trying to identify the woman online, with no luck. Sleepless and frustrated, she finally screamed, “El, if you want me to do something, (expletive) help me.’”

That night, when the fire alarm went off in their house, Alice and her husband awoke to find the birth certificate burning in the kitchen sink. “I never saw her again,” Alice said. “After that, my house was my house again.”

Back when she was an antique dealer, Heritage Auction consignment director Marsha Dixey picked up a vintage rocker and stenciled blanket chest at the estate sale of an elderly woman who had been murdered by a relative. Little did she know the furniture was still kicking.

“I would come downstairs in the morning and the blanket chest, which I used as a coffee table, would be flipped over on its side or in varying positions, never the same. We had small children at the time who couldn’t have lifted it,” she recalls. “When the kids got up early and went down to get their cereal, they would notice the rocking chair would just rock on its own.”

She ended up selling the rocker in a yard sale and banished the blanket chest to the garage.

“I never went to a sale where somebody had been murdered ever again,” she says.

One Book You Really Can’t Put Down

Haunted inns are all the rage today, but few have as many ghosts as The Scott House in Ocala, Florida. In the room that once belonged to Elizabeth Scott, a TV ghost hunting crew found an 1893 copy of Sir Walter Scott’s classic poem, “The Lady of the Lake,” the lone remnant of the original Scott estate.

That’s when things got weird. As the film crew moved into the attic loft two stories up, they turned on the ceiling fan and the vintage book came flying off, hitting Nancy, their lead sleuth, in the head. When the crew returned home, Nancy was gobsmacked to find the book in her luggage. It now finds its way around her house on its own, somehow winding up behind the wastebasket, inside her china cabinet and even chilling in her refrigerator. 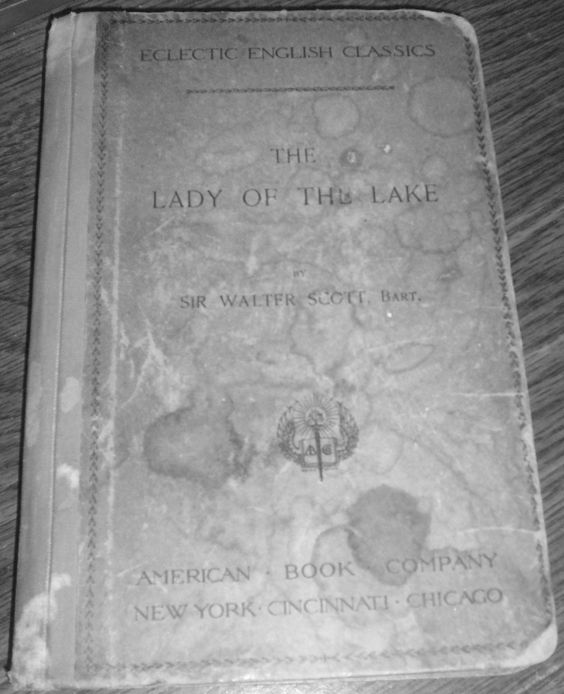 “For the book to then do odd things in other locations really confirms this idea that there is something to all this,” says Balzano. “A book that keeps its juice when it travels to a new place gives you that little added shiver.”

When Uncle Webb died, the Seattle contractor willed his tools to his son, Jimmy. But because of a rift between Webb and Jimmy, who chose a career in teaching instead of construction, Webb’s tools wound up with Jimmy’s cousin Carl, who soon contacted Balzano about strange changes in his home.

First, when he would return home, the radios would suddenly turn on with Beatles music playing Uncle Webb’s favorites. Then Webb’s tools started turning up in weird places; first a single wrench on the bed, later the contents of the whole toolbox, spread out and pointed in a spiral formation.

Then came the nightmares.

“He started having dreams of his uncle handing him tools and pointing to the door, and he would wake up and the door was slightly open,” says Balzano. “He tried to communicate with his uncle, saying, ‘What do you want with me? What are you trying to say to me?’”

When Carl finally bundled the tools and returned them to their rightful heir, the nightmares ceased.

“The day he gave the tools away, ‘Here Comes the Sun’ was playing on the radio as he came into the house,” Balzano says. “The tools were where they weren’t supposed to be. To Uncle Webb, the tools were a way of him saying ‘I’m sorry’ to his son and trying to reconnect with him.”

There’s No Getting Rid of Robert

Haunted dolls have a natural appeal over other haunted objects for two reasons: they are essentially mini-me’s and they’re creepy as hell. And none are creepier than Robert, who’s been disturbing adults and children alike since 1904.

As the story goes, friction between noted Key West artist Robert Eugene Otto and one of his servants forced the woman’s dismissal. To prove there were no hard feelings, the woman built a doll for Otto’s young son Robert in his image, adding a voodoo curse she’d practiced in secret. Shortly after, Robert Jr. requested to be called Eugene, so as to differentiate himself from the doll. 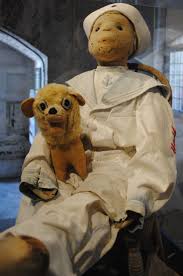 Robert the doll soon took on a life on his own. Eugene became so obsessed with him that two voices could be heard when the two were alone. Toys and other items around the house started to break or disappear, occurrences that young Eugene would explain by the catchphrase, “Robert did it.” People claimed the doll appeared to even move about the house on its own.

“There is not enough you can say about Robert. He was THE haunted doll long before we had movies about haunted dolls,” Balzano says. “It might be the town’s embrace of him that allows him to still have his mojo.”