Bubble wrap: We formally know it as the thing we use to protect our glassware from breaking. We also know it as the super fun and addicting toy from our youth that we just couldn’t stop popping, much to the chagrin of our parents, friends and noise-sensitive folks.

However you have used bubble wrap, one thing is clear (no pun intended): it has quietly embedded itself into our lives.

To kick off our newest series Stuff About Stuff, where we investigate the seemingly mundane things we have, we’re delving into a subject near and dear to our hearts: Bubble wrap. Because, as we found out, there’s actually a lot of things that we DON’T know about our bubbly friend. 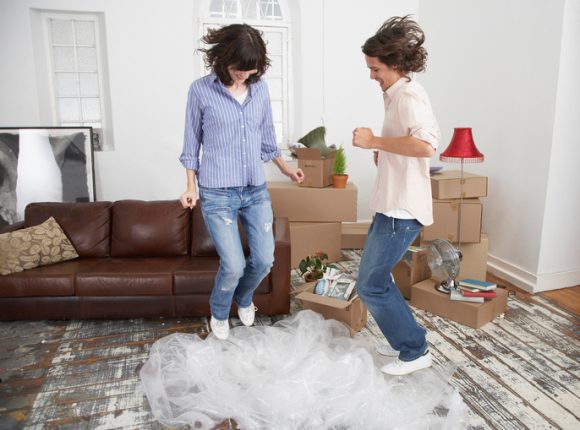 First things first: Bubble wrap wasn’t actually invented to be, well, bubble wrap. Actually, it was invented to be wallpaper, which ended up failing miserably.

Bubble wrap was first invented in 1957 by inventors Alfred Fielding and Marc Chavannes. Their initial goal? To make textured wallpaper.

However, things didn’t quite go according to plan.

Fielding and Chavannes used two shower curtains pressed together to create textured wallpaper. According to Joey Green, author of “The Bubble Wrap Book” (yes, this actually exists), the two men “attempted to develop a machine to produce plastic wallpaper with a paper backing. Instead, their machine produced sheets of plastic filled with air bubbles.”

Naturally, the idea didn’t perform too well on the market. Fielding and Chavannes then decided to sell their product as greenhouse insulation instead. Again, the idea failed spectacularly.

Bubble wrap’s life wasn’t over just yet, however. Three years after Fielding and Chavannes’ failed venture, a marketer named Frederick W. Bowers saw bubble wrap for the beautiful butterfly that it was. Bowers worked at Sealed Air, which manufactured the product. According to Mental Floss, Bowers got the idea to use bubble wrap as packaging material when IBM announced their new computer in 1959.

After a successful pitch, IBM began purchasing the product to protect their computers and other fragile products. As of 2012, Sealed Air has grown to annual sales of $4 billion, with a net profit of around $255. According to Mental Floss, about 10 percent of its revenue comes from Bubble Wrap (which means that $400 million worth of Bubble Wrap is sold annually!).

However, the bubble wrap world was  shaken to its core in 2015. The Sealed Air Corporation announced that it was rolling out a new line of bubble wrap that wasn’t quite as pop-able.

Why? According to io9, traditional bubble wrap has been declining in usage; while it does provide excellent cushioning, it also takes up space. And that doesn’t appeal to companies that are shipping in high volumes.

Sealed Air’s new product has lines of connected bubbles, which are filled as a sheet with a special pump. The new product takes up much less space, which should appease companies that ship a ton of items frequently.

Despite these “declining sales” that Sealed Air cited back in 2015, we can safely say that Bubble Wrap is still pretty synonymous with moving, packing and protecting our beloved items.

Need bubble wrap for your moving or shipping needs? We’ve got you covered! Get bubble wrap at a low price and free 2-3 day shipping when you purchase through SpareFoot. Shop our bubble wrap collection here.