So, would you be more likely to move across the country for an amazing relationship or a fabulous new job? Either way, you’re in good company.

You probably know that old saying about not being willing to do something for love or money. But it turns out most people would make a big move for one of those two reasons.

A SpareFoot survey found that exactly 50 percent of Americans said they’d be more likely to move for the man or woman of their dreams while the other half would rather relocate for the job of their dreams.

But the numbers start to change a bit when you look at the answers by age group: Millennials (61 percent) are more willing to pack up to follow their careers than the rest of the population, while Baby Boomers are the most likely (64 percent) to move to be with a romantic partner. 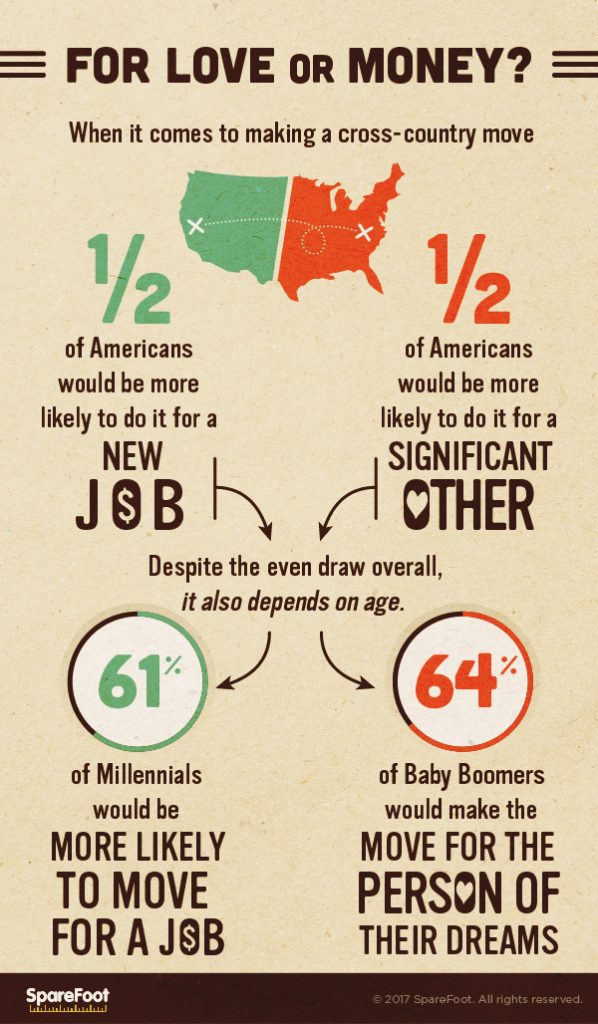 There are pluses and minuses to both scenarios—and, as any jilted lover or worker who just got surprised with a pink slip will tell you, neither is a guarantee. But both can offer big rewards.

The Pros and Cons of Moving For Love

Moving for love can allow you to continue a good relationship with a person who lives in a different city or state, said therapist and professor Terri Orbuch, aka “The Love Doctor” who is the author of 5 Simple Steps to Take Your Marriage From Good to Great.

Pluses include the ability to see your significant other on a more regular basis and the chance to work more closely on your relationship together, Orbuch said. Another moving-for-love pro: you no longer endure the sadness of missing your partner or worry that the relationship won’t survive the distance.

On the other hand, moving for Mr. or Ms. Right has minuses. Your partner is likely to be more connected to your new city or town, with a job and friends already in place. As the newcomer, you might lean heavily on your significant other as you get settled in, which can lead to one-sided dependency. Jealousy, power imbalances, and loneliness could follow, Orbuch said.

The Pros and Cons of Moving For a Job

Moving for a job can allow you to take an opportunity that might not be available now in the city or town where you live, possibly putting you in a job that’s a better match or pays more than opportunities close to home.

Pluses of moving for a new job include the ability to focus extensively on your work, said career coach Ashley Stahl. After all, in a completely new city, you’ll likely be less distracted by the pull of, say, socializing with old friends. You can delve completely into your new job.

A minus is that moving is widely known as one of the most stressful life experiences, and changes at work are also on the list. Combining the two can amplify the mental and physical strain of these big changes. This is especially true if you’re relocating with a family, which “can cause serious stress,” Stahl said.

Before making the move, ask yourself how the new job will contribute to your skill set and add value to your experience in the workforce, Stahl recommends.

So, why are younger adults more likely to move for career than for love?

Caroline Beaton, a journalist who covers the psychology of millennials at work for Forbes, points to Maslow’s hierarchy of needs, which looks like a pyramid. The most fundamental needs like food, water and shelter form the base of the pyramid, while social needs like love are in the middle and self-actualization sits at the top.

Millennials as a generation have been given a lot of opportunity, Beaton said. So, many members of Gen Y who consider their basic needs met might feel ready to move on to self-actualization, which involves pursuit of creativity and personal development.

“Millennials may be more willing to move [for work] because they’re prioritizing themselves and their own meaningful careers,” Beaton said.

But they should also remember that love is lower on the pyramid because it’s “a more important and fundamental need,” Beaton said.

Moving for Love or Money

No matter why you’re making a big move, it’s smart to really think about whether you’ll truly enjoy living in your new city, aside from the reason for the move, Stahl said. Also stay flexible and prepare in case things don’t turn out as you expected.

“Always have a Plan B, and options,” Orbuch said.