There’s a reason why so many Grandmas use cast iron cookware: they love you and they want to cook you the most delicious food possible. But if you’ve ever been scolded by someone for improperly handling their cast iron skillet, you may be reluctant to purchase one for yourself.

After all, you want a sturdy, multi-purpose pan, not a temper-mental Gremlin you can’t get wet or feed after midnight. Caring for cast iron is actually very straight forward, and like all tools that have the potential to last a lifetime, they will take care of you if you take care of them.

Why Should I Use Cast Iron?

Cast Iron heats up very slowly, but once it gets hot, it stays that way. So when you are searing a thick steak in your cast iron skillet, the temperature of the pan doesn’t rapidly drop like it does with aluminum and stainless pans. If your pan cools down too much when you are attempting to sear, you miss out on producing that sought-after thick and golden crust.

Superior heat retention is the reason why so many southerners fry chicken in cast iron. When the breaded chicken is added to the hot oil, the temperature stays consistent. This ensures that the fried chicken is perfectly crispy, not saturated and greasy.

Once you get a good cooking rhythm in place with your cast iron pans, you will realize its full cooking potential. Skillet cornbread with a crust that would bring a tear to your grandma’s sweet eye, pies, cobblers, cakes, rustic biscuits, skillet pizzas, stir fries, fried eggs, omelettes, seared fish, and roasted chicken are some of the foods that your cast iron can make better than your other pans.

Non-Stick Without The Toxicity

Teflon works wonders as a non-stick coating, but toxins can leech out of teflon over time, and nobody wants that—especially if you have a pet bird.  Cast iron pans can build up a natural non-stick coating known as a patina. This slick, shiny coating on your pan is achieved through the process of “seasoning”.

Maintaining the slick coating of your pan may take some effort, but your pan could potentially last for generations, so don’t be lazy. Cheap cookware is made to be rode hard and thrown out when it loses its luster; cast iron is in it for the long haul if you treat it right.

Caring for your Cast Iron Pans 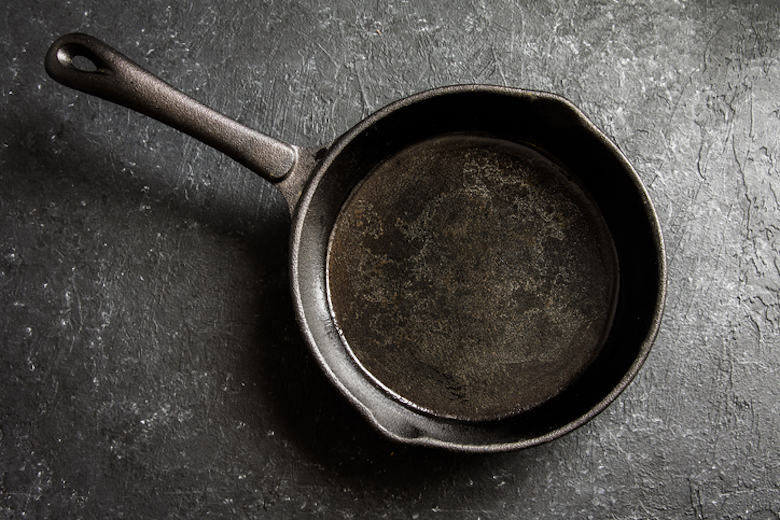 Rust is the arch-nemesis of your cast iron pan. It’s inevitable that your pan will be consumed by rust and disintegrate into dust in the distant future. It’s up to you to slow that process down as much as possible with a few preemptive practices.

After you cook with your cast iron pan, try to clean it as soon as you can. The longer you wait to clean it, the more the residual food particles will fuse with the pan.

Wipe away any debris left in the pan with a paper towel, then wash the pan using warm water, mild soap, and a sponge or non-abrasive scrubber.

Instead of mild soap, you can can use a tablespoon of salt and a little bit of water. Add both to the pan and scrub with a paper towel or soap-free scrubber. Rinse and wipe dry. Repeat as needed until clean.

Once your pan is totally clean, place it on a burner set to low heat to evaporate any moisture left behind. When all the water has dissipated, turn off the heat and pour a tablespoon of unsaturated cooking oil (flaxseed, grapeseed, and vegetable oils are ideal) in your pan and spread it out to a thick layer with a towel. It is helpful to have a dedicated kitchen towel for coating your pan with oil so you aren’t ruining multiple kitchen towels or wasting paper towels.

Follow these rules and you will never have to worry about rust or scratches patinas:

When you heat a cast iron pan that is coated with oil, a slick, hard shell is formed throughout the pan’s craggy surface due to a process called polymerization. Over time, this layer gets thicker and more imbedded, allowing for the surface of your pan to become virtually non-stick. Proper seasoning can also help deter rust by creating a barrier between oxygen and iron.

Rub a tablespoon of unsaturated oil into a clean and dry cast iron pan.  Once a thin layer of oil covers the inside, bottom, and handle of your pan, place it upside down in a 375 degree oven and let it bake for 45 minutes. A sheet tray set on a lower rack of the oven can help catch any bits of oil that may drip during the process.

After your pan is seasoned, preserve the coveted coating by oiling your pan after every use. The more you use your pan and oil it, the stronger and thicker the coating will become.

The best place to store and show off your properly seasoned cast iron cookware is on a hanging pot rack. Hanging your pans helps ensures they are drying thoroughly while protecting the coating from getting nicked by other pans. If you are forced to stack your cast iron pans on a shelf or in a cabinet, place a paper towel or paper plate between each pan to prevent them from scratching each other.

Be sure that your cast iron pans are COMPLETELY CLEAN AND DRY before packing them inside of a moving box. Be sure to wrap your skillet in a dry towel to protect it from moisture while moving or while kept in a self-storage unit. Cast iron is quite heavy so be sure to place your pan at the bottom of a small box. Pack other kitchen items on top to fill up the box, so long as they are dry. Try not to pack more than one skillet per box because of their weight.

Taking good care of your cast iron may sound like a chore, but it is a healthy obsession that can be a meditative practice. Your family and friends will absolutely taste the difference when you serve them food that has been prepared in your beloved cast iron cookware.