Over the past decade, American beer drinkers have been fortunate enough to witness a brewing revolution, as evolving tastes and beer-making processes have pushed beer to a level of sophistication rivaling that of fine wine. As the over 2,000 breweries now making beer in America—up from 89 in 1979—compete to produce the most unique and sophisticated batches, some brewmasters have gone as far as to adopt a vital step of the winemaking process into their own craft: ageing. That’s right: while a driving force of the local-beer movement has been the need for fresh, crisp-tasting beer, some craft breweries have reversed this trend, producing beers that are meant to be kept for months or years—or even decades.

How to Store Beer

In short, the best way to store beer is upright if the bottle is capped, and on it’s side if the bottle is corked. You want to avoid heat, direct sunlight and changes in temperature so ideally you keep your beer in a cool, dark place. Beer with higher alcohol content can be stored longer than beers with low alcohol content, so definitely keep that in mind.

For more detailed steps, we’ve enlisted beer expert Christopher Staten of Draft Magazine to lend his expertise to our own. 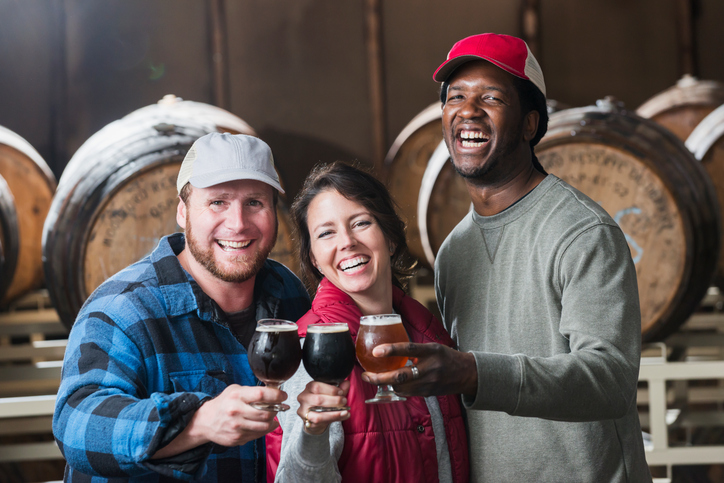 To Age or Not To Age?

While only a select number of beers are meant to be aged, it’s quite possible to store a larger variety.

“Any beer can age and develop, but not all do so pleasantly. The rule of thumb is to stick to beers higher than 7% ABV,” said Staten.

Styles that commonly contain such quantities of alcohol include stouts, barleywines, Belgian abbey ales, as well as many other styles that feature roasted grains. The sharp flavor of alcohol in these styles should mellow over time, while the malts and grains take on sweet, complex flavors. But don’t use alcohol content alone as the rubric for your beer cellar:

“You’re looking for flavors that develop over time through oxidation: leather, tobacco, nuts and dark fruit, depending on the base style,” said Staten. “Typically, these bigger beers develop a sherry-like profile with time.”

When it comes to finding beer that has been brewed with ageing in mind, there are a number of terms to look for. Bottle-conditioned beers are bottled with active yeast included and are meant to rest on a shelf for a length of time as they ferment. Beers sold as ‘Verticals’ or ‘Brewer’s Reserve’—which are often released in explicit vintages–are also typically meant to be kept for years.

There are, on the other hand, beers that absolutely should not be stored, namely lighter beers that are low on alcohol—these will lose flavor within three to five months. Most heavily-hopped beers also make for poor storage candidates.

“Hoppy beers can age with interesting effect, but you’ll lose the hops’ brightness over time,” said Staten. A beer is generally considered hop-heavy past the 45 IBU mark.

Once you’ve picked which brews to save for later, there are three factors Staten told us to consider: temperature, location and placement.

“If you can master those aspects, there’s no reason why your bigger beers shouldn’t age gracefully.”

“Extreme heat causes beer to age more quickly and not as smoothly, so, like wine, it’s best to find a spot that hovers around 50 degrees, the standard cellar temperature,” said Staten.

While a refrigerator set between 50 to 55 degrees is ideal for most capped beers, corked bottles are another matter. Your standard kitchen refrigerator is designed to create the driest environment possible, which can cause corks to shrink and allow air to enter the bottle. Wine coolers, which are designed specifically to solve this problem, will work great for corked beers.

If you’re unable to find an environment that stays precisely within the 50 to 55 degree range, it’s not the end of the world.

“Beer will still develop nicely at slightly warmer temperatures, but the key is consistency,” said Staten. “A collection of beer sitting in the garage during the fall and winter will be fine until spring and summer temperatures hit. Drastic fluctuation causes the beer to go through some funky changes.”

Ever cracked open a cold one and had a distinct whiff of skunk assault your nostrils? It’s likely that your beer spent a little too long in the tanning booth. Sunlight breaks down hop compounds into a sulfur compound very similar to the active ingredient in a skunk’s spray, meaning that you’re not just using a metaphor to describe your beer: it quite literally smells skunky in precisely the same way the milk of a skunk’s anal glands would. That should gross you out enough to know that, in terms of location, your number one concern should be finding a place absolutely protected from light. This is also the reason that cans, kegs and dark glass bottles are the best containers for preserving beer—green and blue-tinted glass offers only minimal protection, while clear bottles are the absolute worst. Which is precisely why the marketers of a certain kingly, clear-bottled cerveza from south of the border always make sure to emphasize the addition of a lime—which masks the skunky scent with a citrus bite—in their sun-soaked advertisements.

Cellars and basements will obviously offer superb protection against light damage. A dark interior closet on the first floor of your home will work as well, and if you have nothing of the like available, a dresser drawer will do—Staten told us he has a few selected bottles stashed away in one of his. Climate controlled storage units, which keep temperatures around 50 degrees without being as dry as a refrigerator, will also offer excellent light protection. If light does leak into your unit, make sure your bottles are covered. In such cases you might consider purchasing a Brewbicle. These modular beer-cellar systems offer 100% UV protection for up to 25 12oz bottles or 16 22oz bottles, and are also an excellent way to keep your collection organized and clearly labeled.

Wine connoisseurs know it’s best to store their grape juice on its side, but is the same true of beer?

“The general rule of thumb is to store capped bottles upright and corked bottles on their side,” said Staten. “I don’t necessarily think there’s much to worry about with regards to beer touching lined caps. But for corked bottles, there is something to be said about the liquid keeping the cork from drying out.”

There is, however, some debate over the matter. Some beer experts claim that when beer comes into extended contact with a cork, unwanted flavors can be imparted. They argue that the humidity inside the bottle is sufficient to keep the cork in good condition, and that most quality corks these days are treated so as to not dry out. There’s also the opinion that storing a beer on its side will cause yeast sediment that should normally sink to the bottom to mix with the beer and end up in your glass—this is particularly true of unfiltered beers. As cellaring craft beer has only become popular in recent years, we’ll probably have to wait before we can settle the debate. In the meantime, buy two of the same bottle and find out yourself.

American Craft Brewing being a relatively recent phenomenon, it’s not yet possible to say how long any given style should sit in the cellar. It’s common to hear that, alcohol being the preservative it is, higher percentages equate to longer life: most beers around the 8% ABV mark will last a handful of years, while those above 12% should, much like wine, be good for decades. But these are nowhere near hard rules.

“We’re still in a time of experimentation and education with regards to cellaring, so it’s always best to buy multiple bottles of a particular beer you’d like to age,” said Staten, who encourages beer enthusiasts to take part in the experimentation themselves. “Drink one fresh, and then pop the rest open incrementally to see how they develop. Keep track of the style, the ABV and, to some extent, the ingredients in order to develop an educated idea of how long similar beers should sit to achieve desired profiles.”

As for SpareFoot, we plan on pooling our collective efforts to advance beer science in any way possible.