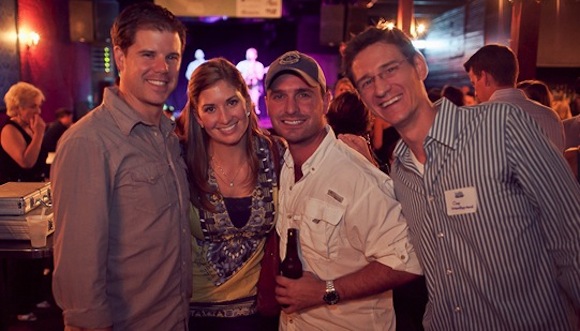 It’s a Tuesday night and you’re eating a TV dinner alone. It’s been a long time since you’ve gone out into that world, and you’re a little worried your skills have gotten rusty over the months. What will people think of me? What do I wear? What do I talk about? You can’t stop thinking about the networking get-together your friend told you about days ago. You know the one: the meetup that the startup you’ve been crushing on is going to be at.

It started when you met those startup folks at an after-work social back when you were with your old company. They were totally smooth, cool, genuinely nice people. Plus their company didn’t seem half bad, either. You could imagine having a long and devoted relationship with the company–and you couldn’t help but wonder why that open position had remained unfilled. Maybe those startup people were scared of commitment. Maybe they were picky. But you’ve always been too shy to say something; besides, after that social, you never saw them again. That startup was the one that got away.

“Recruiting is like dating,” SpareFoot recruiting specialist Rachel Morse said. “We have to hang out with anyone we hire for a long time. The question comes down to: Do we want to put a ring on it?”

Face Time
Even with all the social networking that we do online, sometimes there’s nothing as effective as old-fashioned face time. If you’ve never attended a networking event, don’t be shy–no one is going to bite you. In fact, networking events may be one of the best ways for you to connect and learn, and to form meaningful relationships with other like-minded people as well as recruiters.

“People might not want to go because they’re afraid that nothing is going to come out of it,” Rachel said. “That’s my natural instinct, too, but I’ve never left a networking event thinking that. It’s a low-risk, high-reward situation. You just have to do it.”

If you’ve been pining after a sexy startup or just want a change of scenery, get out of your pajamas, turn off the reruns and get ready to make a night of it. Here are 10 of Rachel’s favorite networking events in Austin, in no particular order.

This is a great place for developers and designers alike to meet and discuss current trends. Relax with beers and pizza while listening to a host of impressive, diverse speakers, who’ve included Daniel Parker of Evernote and Mike McNeil of Balderdash.

“If you’re a Javascript badass, this is where you go,” Rachel said.

Even if you’re a beginner at PHP, you should consider going to this meetup–they welcome all skill levels and even have subgroups that meet monthly. Currently, the meetup happens on the second Thursday of each month. 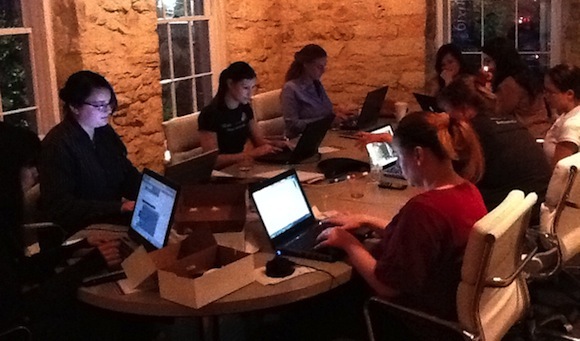 In a career sector dominated by men, it’s important to connect with and reach out to other women in your field. Austin All-Girl Hack Night is exclusively for women (duh) who get together to discuss tech trends, work on projects and get advice from their peers. Attendees come from an array of coding languages and backgrounds. If you’re a woman and you love to code, you definitely should be going to this meetup.

“This is usually attended by people who may be open to other opportunities, or just people who want to learn more about their profession and networking,” Rachel said. “Networking is good all around, even if you aren’t looking for jobs; it opens up doors for yourself and other people.”

The next meeting is May 14. Check out Refresh Austin’s Google group for more info.

The Austin Young Chamber of Commerce is perfect for young professionals, or those hoping to connect with young professionals. AYC schedules guest speakers and gives members a great chance to learn new things. You must be a member to attend, but it’s well worth it; events include new member coffees, an annual poker tournament, and nonprofit fairs to help young people in Austin get involved in the community.

“They have fun events like Poker Nights, which are for charity,” Rachel said. “They also have tailgates and host various talks–I went to a talk by the owner of all the Rainey Street bars on how she opened Lustre Pearl.” 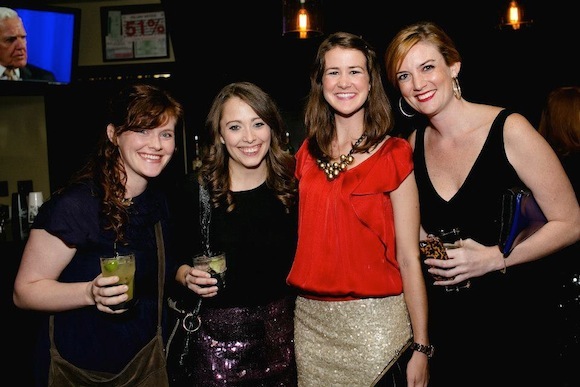 “You get to network with other women in Austin, and you get to hear about what other companies are doing,” Rachel said. “It’s great to hear female guest speakers who have succeeded in Austin.”

The YWA includes a huge community service committee, which always is looking at ways to get people active and involved. Like the AYC, the YWA charges a membership fee, but the rewards are awesome; among other things, members enjoy attendance at networking mixers, participation in the YWA Mentor Program and development of fundraising skills.

“As long as you’re a young, professional woman, you will learn and network and get involved with your community. Plus, they have membership appreciation dinners,” Rachel said.

Door 64 asks tech recruiters to pay a fee to attend, but it’s free for tech professionals. Originally started in 2007 as an after-work gathering, it’s now the largest networking group in Austin for the second year in a row, according to the Austin Business Journal.

“The good thing about this meetup is that they spread themselves out so that people can network in their geographic area,” Rachel said. “These are a little more tech-heavy, and they have associated technology events like a certified Scrum product-owner workshop, a mobile-app-building workshop and an Austin Linux group.”

Network After Work is relatively new to Austin but pretty well-established nationwide. The company launched in 2009 and hosts events in nearly 30 cities; it hopes to expand to 50 by the end of 2013. Network After Work lets professionals from all fields mingle at some of Austin’s best bars and restaurants. Tickets are $10 online and $15 at the door.

“It’s typically 250 to 300 professionals,” Rachel said. “They have color-coded business cards to show what department or specialty you’re in.” 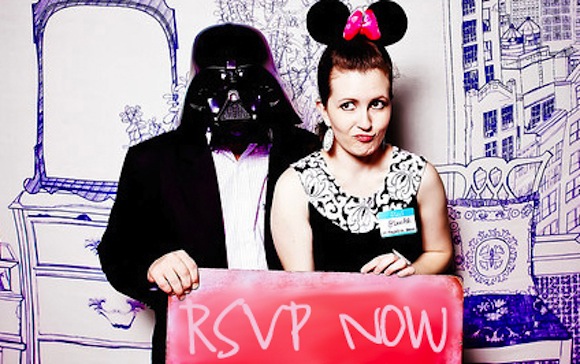 BASHH (Big Ass Social Happy Hour) was established in 2007 and has been rocking the Austin networking scene ever since. Founded by Lani and Benn Rosales, BASHH takes place every month at an Austin bar. BASHH isn’t the average networking event–it attracts a diverse crowd and isn’t limited to tech professionals. If you’re down to have some seriously wacky fun with other Austinites, BASHH is the one meetup you don’t want to miss. Proceed with caution, though; the BASHH website advises first-timers to “be prepared to miss work on Friday” after the Thursday event.

One of the best-known meetups in Austin, the Austin Tech Happy Hour does away with presentations, speakers and agendas. Instead, it encourages Austin techies to relax, mingle and share ideas at Molotov on West Sixth Street. The setting is diverse, and the takeaways are valuable. If you’re a startup newbie, a creative thinker or an entrepreneurial guru, this is the place for you.

“There are a lot of people from all different fields that attend,” Rachel said. “You can find anyone who works or wants to work at a tech company here.”

Words of Advice
Remember, no matter which networking event you attend, it’s not about how many business cards you can throw out into the crowd. Treasure those cards like you would your phone number in a seedy nightclub–not that we would judge you for being in said nightclub in the first place. (Ahem.)

“Networking can be really shallow sometimes,” Rachel said. “You may look at people and wonder, ‘What can you do for me?’ But actually establishing real connections with people is extremely valuable. It’s not the fastest way, but it’s the most effective. It’s better to nurture your connections until they turn into something mutually beneficial for both parties.”