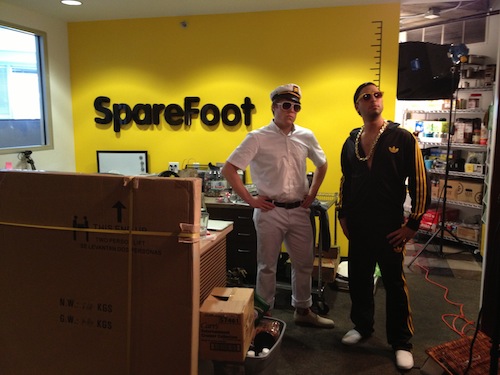 In 1979, Francis Ford Coppola dragged his cast and crew to the sweltering jungles of the Philippines to create what would become widely acknowledged as one of the greatest films of all time, “Apocalypse Now.” In 2013, an Austin startup had the same dream. Sort of.

Armed with a camera, a handful of crazy and dedicated employees, and a yellow Hummer H2 from Toys “R” Us with a mounted mobile shredder, SpareFoot set out to fulfill the completely realistic fantasy of becoming the biggest, baddest startup there ever was.

The dream? To make a legendary recruiting short film that would leave no doubt in anyone’s mind about wanting to work for us. And, of course, in typical SpareFoot fashion, to have fun, drink champagne and consume inappropriate amounts of Franklin Barbecue along the way. We sacrificed our weekend, our office and our dignities during a rigorous two-day film shoot. In the end, it was magical and life-affirming–an epic journey worthy of Tolkien.

Here are the takeaways from the filming experience:

Stars Among Us
Apparently, we have a bunch of Meryls and Nicholsons in our midst–and we didn’t even know it! Who could predict that co-founder Chuck Gordon could adopt a convincing Transatlantic accent, or that co-founder Mario Feghali’s eyes could be so intense and unblinking? Who knew that Erin Fitzer could embody the soul and spirit of Vin Diesel, or that Rachel Morse, the sweetest person on Earth, could play intimidating so well? It just confirms how multitalented SpareFeet are–our own Scooter Womack puts James Van Der Beek’s crying skills to shame.

Making a Film is Really Hard
With the exception of our talented director Matt Sobel, this was the first time that many of us were involved in any sort of film production. Our finished product, which modestly clocked in at just under six minutes, took three months to write, plan and execute. All of that hard work and preparation culminated in a two-day shoot that–even with all of our planning and groundwork–still felt frenetic and delicate. In the end, you just have to trust that things will work out (and don’t forget to breathe).

If your startup is thinking about investing in a recruiting video, here are some things we learned that will make your life easier:

SpareFoot Is Amazing
It’s a testament to how incredible our employees are that they would willingly give up their weekend to spend more time in the office than they already do during the week. Despite the waiting, sweating and frequent shouts of “QUIET ON THE SET!”, every single person remained good-natured and extremely adaptable. From our super- talented analytics expert Brett Chauvière (Hungry Sales Guy), who sacrificed precious bones for the shock-collar scene in the kitchen, to our marketing pros Rachel Greenfield and Tony Emerson for bravely parading their bodies around in golden unitards (officially called “Zentais”), we couldn’t have asked for a more passionate and perfect bunch of coworkers. Thanks, SpareFoot–this video is dedicated to you.

Below, check out some more behind-the-scenes shots from our wild weekend. 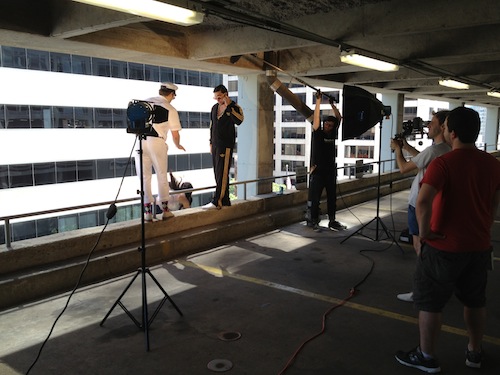 Can we trust you? Don’t let the Commodore schtick scare you–we’re hiring, and we’d love to meet you! Visit https://www.sparefoot.com/jobs to check out our career opportunities. We promise not to let you fall off the building. (We’ll catch you first, obviously.)