Given the ubiquity of self-storage, it’s no wonder that Lars Fisk, the former creative director for Phish, chose it as the subject of his latest art project.

Fisk, studio and facilities manager at Socrates Sculpture Park in Long Island City, NY, has a long history of turning Volkswagens into art. With “Self Storage,” Fisk converted his VW Westfalia camper into a traveling self-storage facility. Driving from New York City to High Desert Test Sites, an experimental art event in Joshua Tree, CA, Fisk’s VW periodically “popped up” into a storage facility along the way.

Fisk talked with us about self-storage, sculptures, Phish and converting shipping containers into homes.

While driving cross country, you had a “Little Miss Sunshine” moment at some point?

Oh yeah, I did. There were all kinds of adventures. Mishaps of all sorts–driving those old Volkswagens, you’ll have that. 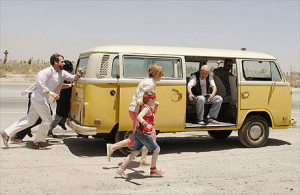 Was “Self Storage” a commentary on overconsumption or consumerism in America?

Absolutely, it is. I think that it’s a perfect reflection of overconsumption. The self-storage industry is so prevalent now and these facilities are being built everywhere. I see that as a perfect indication that all of the things that we as Americans are buying are just overloading what we’re able to keep.

Is it sort of like your “Trashbags” project? (In 2008, Fisk sculptured a mound of trash bags out a single block of marble.)

It is akin to that, yes. Those also were about waste and excessiveness. 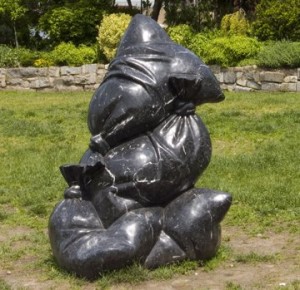 Was this your first trip to High Desert Test Sites?

It was the first time I participated, but I’ve been aware of what Andrea Zittel has been doing for years, and she’s actually a mentor. I met her when I was in graduate school at Columbia University, and I just really felt like what she was driving at with her own artistic practice was something that was very understandable to me. I was interested in a lot of things that she was–with design and architecture, and how these things can be used to create alternative styles of life.

A-Z West is really her whole place and the community that comes and goes from that place. She’s set it up in such a way that a lot of artists and all sorts of people can come and pass through and stay overnight even, and dip into her whole world there.

With “Self Storage,” you didn’t have any trouble with police?

No, I didn’t. The whole idea of it was supposed to be a little subversive. It was supposed to be almost like an act or a demonstration–basically, I just camped out on public property while posing as this architectural thing that represented this industry, which I wanted to sort of question somewhat. Because of the prevalence of self-storage facilities everywhere, I wouldn’t be noticed. Maybe that’s what allowed me to do what I did and not get into trouble, because nobody really took notice.

You probably could have done it in New York City.

I did actually. No one seemed to care or notice. I popped up in the middle of Manhattan, right in Times Square. It was midnight on a Sunday, which is a pretty quiet time, but still it’s Times Square. It’s pretty crazy. You can pretty much get away with anything in Times Square–so much visual chaos.

Yeah that was quite a wild ride. And we still may be working together in the future.

The festivals are always rumored. It’s never quite clear to anybody. They’re very secretive about things. Every now and then, they’ll decide to do that. They’ll call me up–last minute, of course–and rope me in. But it’s great fun. 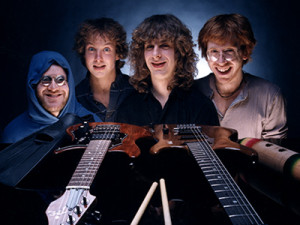 And you went to the University of Vermont? So you knew those guys from Burlington?

I didn’t know them when I was in school, but they were playing around town at that time. Me and my friends would go and see them play at these very small gigs. It wasn’t until about ’95 that they moved their operations to Burlington. The band was really happening at that point. It was then that I really connected with them and their whole management company and got involved.

Were you a fan of their music before?

Oh yeah, I was. By the time I got to Burlington, I was already a fan.

What was your favorite of all the festivals, of all the mini-cities you built?

I think my favorite was “Lemonwheel.” It was set up like an absurdist amalgamation of the Chinese garden with Americana. It was like an Americanized version of a Chinese garden. Not a Japanese garden. Chinese gardens are a lot more flamboyant and theatrical. 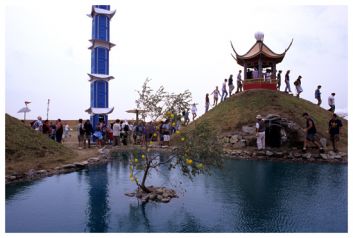 “Lemonwheel,” Phish’s 1998 festival in Limestone, ME

Did you tour with Phish?

Awesome. Thanks so much, Lars.

Among Phish fans, Lars Fisk is a household name. In addition to serving as creative director of eight of Phish’s nine festivals, Fisk’s “Barn Ball” is featured on the cover of Phish’s 2002 album, “Round Room.” 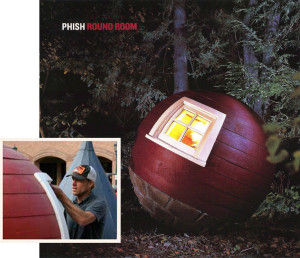 Looking closely at the album cover, you’ll notice that Fisk is actually inside the Barn Ball, which is 18 feet in circumference.

And he created the huge interactive art installations for the band’s festivals.

Phish festivals are enormous. Over three days, the band play sseven or eight sets in front of as many as 70,000 fans. According to Billboard.com, Phish’s 2004 “Coventry” festival in Coventry, VT, grossed about $10 million.

Fisk’s Home
At an undisclosed location in Queens, NY, Fisk built a modest home out of five 20-foot-long shipping containers. The incredibly well-designed home contains a circular skylight and a rooftop greenhouse.

Because of a trade imbalance with countries like China, the U.S. is left every year with millions of unused shipping containers, not all of which get sent back. Like Fisk, some creative types turn these excess containers into homes. As an example, El Paso, TX-based company PFNC Global Communities sells shipping-container homes for under $10,000, and each 320-square-foot house can accommodate a family of five. 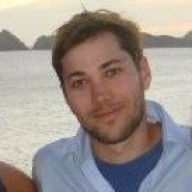