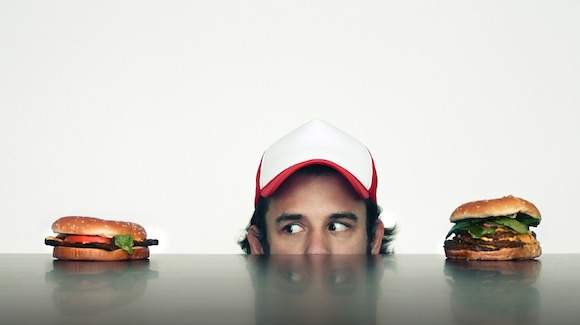 Earlier this month, a debate broke out here at SpareFoot about the merits of In-N-Out Burger, the fast-food chain with the almost-cultish following. Why? Because two In-N-Out restaurants just opened in the Austin area, drawing long lines of customers longing for classics like the Double-Double with “secret” Animal Style sauce–and drawing battle lines among burger aficionados.

During the in-office food fight, one of my colleagues, Josh Tong, carried the banner for In-N-Out. (In fact, Josh slapped an In-N-Out sticker on the base of my computer screen while I was away on vacation. Thanks, Josh.) Other SpareFeet insisted that other Austin eateries serve much better burgers. So, via email, I polled the burger-loving folks at SpareFoot to find out which patties please our palates.

Mr. Tong cast the lone vote for In-N-Out as serving the best hamburgers in Austin. He recommended the Double-Double Animal Style accompanied by the chain’s fresh-cut fries and pink lemonade. 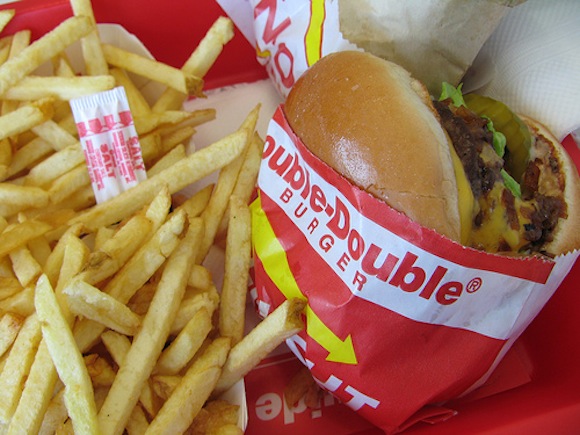 Sorry, Josh, but you’re outnumbered. Two other burger joints dominated the voting. A couple of SpareFeet even peppered their “ballots” with not-so-tasty remarks about your beloved In-N-Out.

Evan Huston, a member of our Development Team, warned: “Stay away from In-N-Out’s Animal Style unless you want your stomach to be ‘Animal Style.’”

For the record, Evan digs the burgers—especially “The Ends” and “El Jefe”—at an Austin spot called Billy’s On Burnet. He sticks his tongue out at the glut of “fancy” burger places in Austin.

In praising Billy’s, Evan said: “You ‘fancies’ can go somewhere else. You won’t find any $15 burgers here. Extra $5 for fries? I don’t think so—they’re included! Imagine that.” 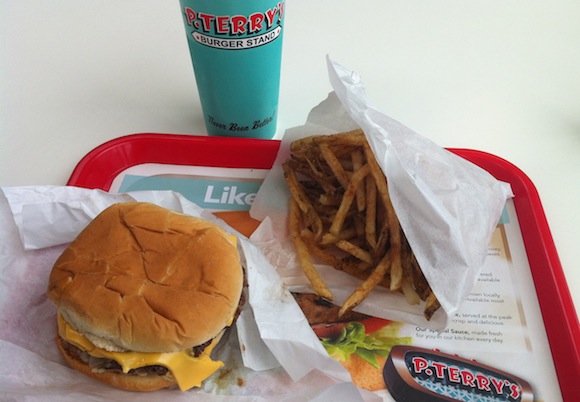 “P. Terry’s has pretty much exactly the same menu as In-N-Out, only it’s cheaper and local. Also, their fries are better,” Tevis said.

Tevis noted that many consumers are “blinded” by the Animal Style burgers and fries at In-N-Out. He said they’re good but “overrated.”

“I’m sure if you asked P. Terry’s to add extra cheese, onions and special sauce to your fries, they’d do it. Actually, I know they will, because I’ve had them do it before,” Tevis said.

Hopping Up and Down for Hopdoddy
To be sure, P. Terry’s enjoys a faithful following at SpareFoot. But several SpareFeet are just as passionate about locally owned Hopdoddy Burger Bar, which earns raves for its gourmet burgers. Craig Barrett, a member of our Paid Media Team, went so far as to award his first- and second-place votes to Hopdoddy.

“The ground beef is excellent. Perfect fat content and not overcooked, as so many places do. The lamb burger is fantastic. The Ahi burger—I would skip that,” Craig said. “The true key to what makes this place great is the homemade bun. BUNS people—stop serving burgers on that white-bread [expletive deleted] that turns to glue instantly.”

Craig said he would have given Hopdoddy his third-place vote as well, except that he hates waiting in line 40-plus minutes for a burger. (Other SpareFeet take exception to that complaint.) 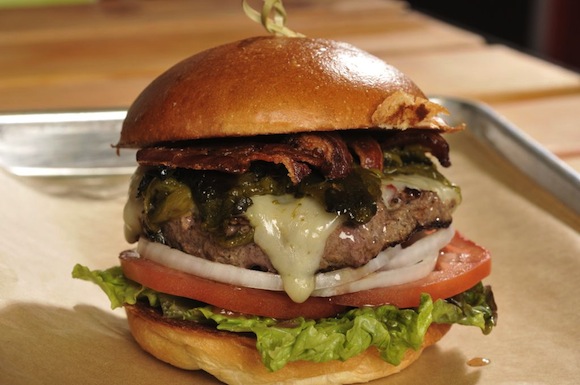 One of the “crafted” burgers from Hopdoddy

By the way, Craig didn’t bash In-N-Out. He rated it as “radically better” than McDonald’s or Burger King, but still asserted that none of them is “best of breed.” As for In-N-Out pitted against P. Terry’s, Craig argued that they’re “the same [expletive deleted] thing.”

“P. Terry’s might use slightly higher-quality meat, but it is hard to tell,” Craig said. “Both are top of the heap as far as fast-food burgers go.”

“The best burgers in town are unquestionably the ones from Hopdoddy,” James said. “But if you’re looking for the perfect intersection of price and quality, I’d recommend P. Terry’s every time.”

Here’s how other SpareFeet weighed in on this food feud.

“All natural ingredients, plus their special sauce is to die for!”

“I’d also like to add that Whataburger could kick In-N-Out’s ass in a Pepsi challenge any day of the week.”

“They use fresh ingredients, and meat that isn’t full of fillers and junk. The tomatoes are ripe, the lettuce is crisp, and you don’t feel gross and food coma-y when you’re done.” 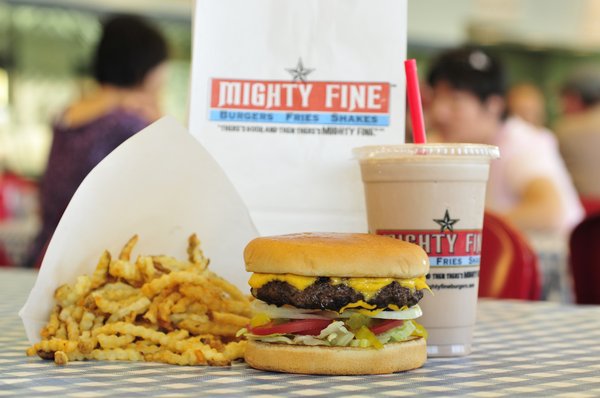 Some fine-looking grub from Mighty Fine

“Their service is awesome, and they focus on what makes a burger great—THE MEAT!”

“I am simple man,” Albert acknowledged in making his choice.

“But,” he added, “if you want a boutique burger joint, I have come to love Mighty Fine. I grew to love them after a long road trip, and I was really hungry. The combination of their burgers and shakes is just divine, if I may say so.”

“My favorite burger is the Ahi tuna burger from Hopdoddy. It sounds completely weird, but is actually one of the most delicious things you will ever experience in your life.

“Hopdoddy offers a variety of impressive, meat-intensive burgers that are all spectacular in their own way (or so I’ve heard from friends—I’ve personally never had eyes for anything else). The Ahi tuna burger instead substitutes, as the patty, a sushi-grade cut of Ahi tuna. And texture is important here, because the tuna patty is perfectly moist, has beautiful consistency and sings to me in my sleep.” 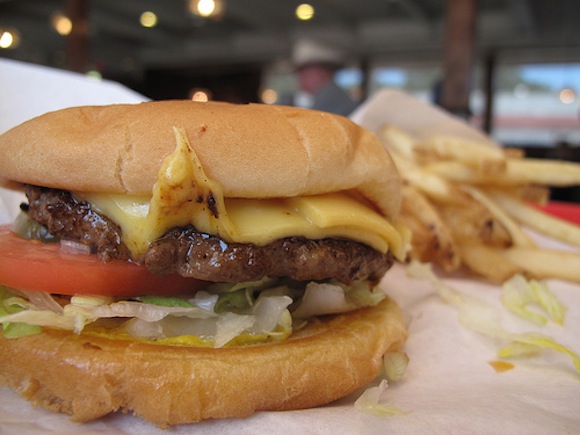 A burger and fries from Dan’s

“They are consistently awesome every time. Never disappointed, never will be.”

“Let’s face it: There are a ton of places to grab a great burger in Austin, but a burger is a burger. Atmosphere is the deciding factor, and my burgers go down best with a draught beer and a special showing at the Ritz.”

“I personally can’t eat any burgers without feeling a bit of guilt over what I am eating, but I’m also a born and raised Texan, so burger-eating pretty much runs in my blood. When I do eat a burger out, I usually opt for a quarter-pound burger from Mighty Fine. Their burgers are made from ‘100 percent fresh all-natural beef’ that is ground and hand-formed on-site.” 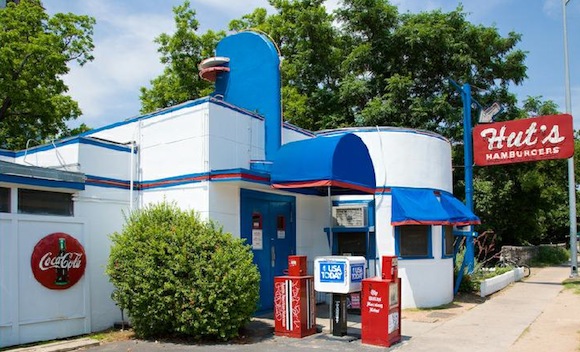 
Hopdoddy devotee Craig Barrett probably will puke when he sees my pick. Craig contends that anyone who recommends Hut’s “should instantly have all of their recommendations disregarded.”

Feel free to disregard my recommendation, Craig, but here goes. The “Theta Special” burger at Hut’s rocks. Why? It’s smothered with pickles, mayo, grated cheddar and hickory sauce. For me, it’s at least a three-napkin burger. And I savor every sloppy bite of it.