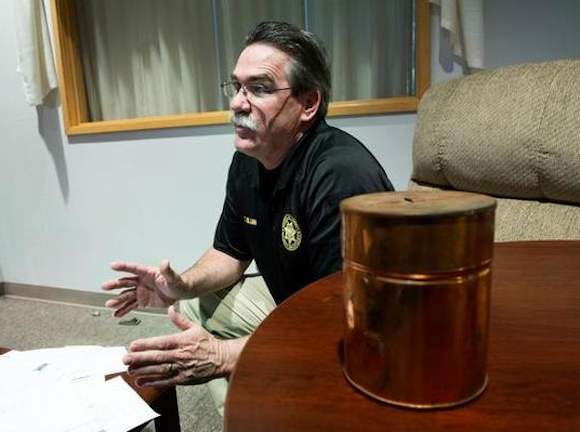 Rose Lyons was born back in 1836, when Andrew Jackson lived in the White House, the Battle of the Alamo raged for 13 days and Arkansas became the 25th state. Her life ended 70 years later following a stroke—a week after the massive 1906 earthquake in San Francisco.

That much (and a little bit more) is known about Rose Lyons. What still is unknown is how an urn containing her cremated remains ended up at a storage facility in Modesto, CA. Tom Killian, deputy coroner in Stanislaus County, CA, is doing some detective work in a quest to solve the mystery.

The Lyons urn was one of three urns turned over recently to the Stanislaus County coroner by the new owner of Derrel’s Mini Storage in Modesto. The facility changed ownership in 2011, but it wasn’t until a few weeks ago that the new owner handed over the three abandoned urns to the coroner’s office, according to the Merced Sun-Star.

Killian told the newspaper that the coroner’s office normally receives about 10 urns a year, but he’s never had to hunt for the family of somebody who died more than a century ago.

“Her remains have survived all this time,” Killian said. “Somebody is going to want them.”

Killian was able to locate Janice Levitan, a distant relative of Lyons who may wind up getting the urn if a closer relative isn’t found.

Pearl Partridge, a granddaughter of Lyons, was listed in cremation records as receiving Lyons’ ashes in July 1906, the Merced Sun-Star reported. But it’s still unclear how, more than 100 years later, the urn turned up at the Modesto storage facility.

This isn’t the first report of cremated remains being discovered at a storage facility.