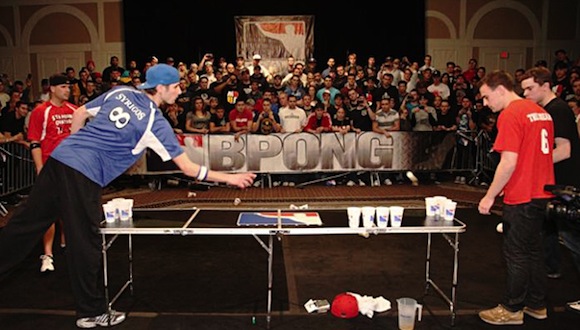 Former patent attorney Billy Gaines has transformed the game of beer pong into a thriving industry. Gaines’ Twitter profile even brags that he’s “ripping beer pong out of college basements and taking it mainstream.”

Gaines is co-founder and CEO of BPONG.com and the World Series of Beer Pong. None other than ESPN.com crowned him the “king of beer pong.”

Here, the “king of beer pong” lets his subjects in on some of the secrets to playing the game.

How do you master beer pong?

Like any game or sport, to truly master the game, people need to practice a lot. One of the guys who won at our tournaments twice starts throwing literally 1,000 practice shots per night a month before the tournament starts.

That’s one of the cool things about beer pong. It’s a game that anybody thinks they can play because anybody can pick up a table-tennis ball and throw it the length of a table and be relatively close to putting that ball into a cup. But it’s a game of skill, and those who practice truly do excel.

How long have you been playing?

I was introduced to the game when I was a freshman at Carnegie Mellon University in Pittsburgh in 1999, and I fell in love with it. I swam competitively, and there was something about the game that just hooked me—the competitive element. It was also the fun and camaraderie. We knew in 2001 when we formed the [beer pong] company that a lot of people were playing the game, but there wasn’t really anyplace to share experiences and meet other people. 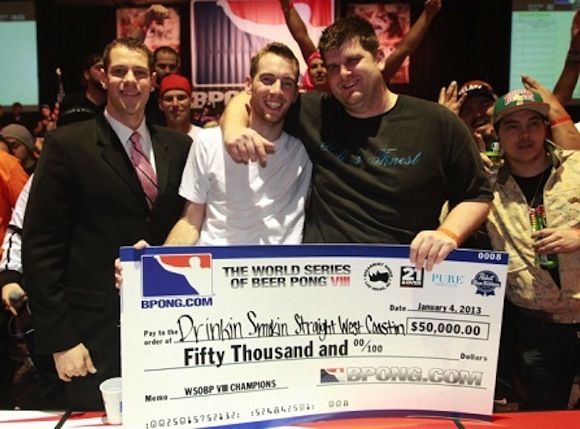 Billy Gaines (left) with the winners of this year’s World Series of Beer Pong.

What are some of the common mistakes people make playing the game?

One common mistake is that people think their success among their friends and at local tournaments translates into immediate success at large tournaments. But there is a pressure these people feel when they’re on a bigger stage.

Another mistake would be that people go into these large tournaments with almost too much confidence, having never felt that pressure. So that goes back to not only do people need to practice, but they also need to play in bigger tournaments if they want to truly excel.

What are the rules? How do you win the game?

Quite simply, the object of the game is to throw a beer-pong ball, which is a table-tennis ball, into a cup of liquid, oftentimes beer. The object is to lob that ball roughly 6 feet across the table and land the ball in your opposing team’s cups. You can alternate taking shots, and the object is to sink the ball into all their cups before they sink their ball into all your cups.

What is the history of beer pong?

I would argue that nobody truly knows the history of beer pong. From the best we know, the game probably started sometime in the 1980s—the version of the game we play today without paddles. The version with paddles seems to have started maybe as far back as the 1950s or ’60s. It wasn’t until the last four or five years that the game has gotten to the point where it’s known throughout the United States. It’s becoming more mainstream and part of the American culture. 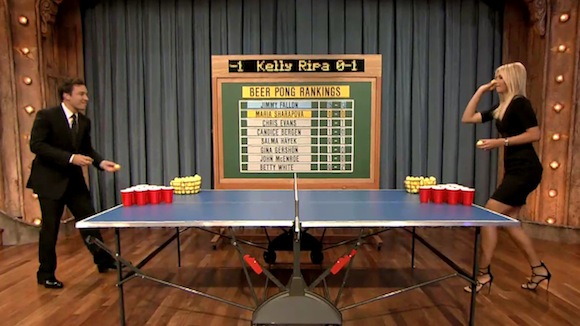 How fierce is the competition across the country?

The competition is fierce, but it’s also getting to the point where those that are really good at the game are almost alienating some of the newcomers. When you get to the big stage and the big tournaments, it’s incredibly tense—just the emotion and the intensity exhibited on the beer-pong tables. It’s almost to the point where you wonder if these guys are going to fight each other. But as soon as that game is over, you know, it’s, “Nice game. Good shooting.”

What are some other secrets to beer pong?

Different people have different superstitions and different methods of holding balls. I think I’ve seen enough variety that I don’t know if any one thing works for everybody.

Beer pong is one of the games at the Austin Startup Games. What advice do you have for those participating in this year’s games?

I think an important thing is to have fun with it. Ultimately, this is why this game started.

What else should contestants know about beer pong?

There is no one way to play it; there is no universal set of rules.

I know for our tournament, we have rules often unlike the rules that have evolved over the years in much of the underground scene. We have rules that are slightly different because those rules are necessary to properly conduct and manage a large-scale tournament. People say, “Well, that’s not beer pong and that’s not how I play.” If they can get past that, then everybody has a good time, and that is what this is really all about.

Photos courtesy of BPONG.com and “Late Night with Jimmy Fallon”