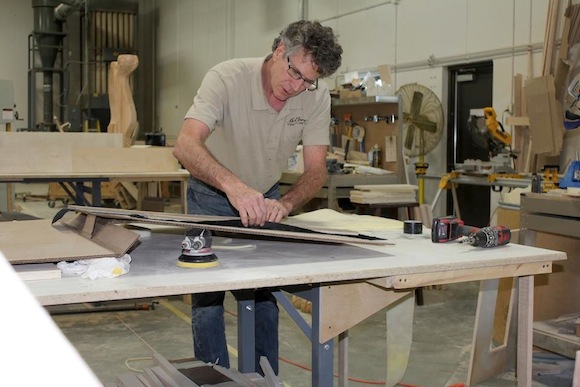 As owner and founder of McClure Tables in Grand Rapids, MI, Todd McClure has been making and selling shuffleboard tables since the 1980s. In fact, you’ve probably spotted his handiwork if you’ve visited Red’s Porch in Austin or one of Austin’s Bikinis locations.

With more than three decades in shuffleboard table manufacturing, it should come as no surprise that McClure knows a thing or two about playing the game. We spoke with him to get his top tips for succeeding in shuffleboard.

After learning the rules of the game, what’s the first thing a new player should work on?

Being able to glide and aim a puck. I would recommend using a shot that some people call the Jersey shot and that most people call a rail shot. You take two or three fingers and hold the puck. Then you take your pinky finger and ring finger and use those two to slide along the edge of the table, kind of as a guide. So you’re holding the puck with three fingers and using the side rail on the edge of the shuffleboard top as a guide. And that’s probably the most important thing for them to learn first.

Another one would be a “knock off,” which is when you hit and knock the other puck off. And then they’ve got “blocks” where you can throw a puck in front of another puck.

What is the hardest thing for beginners to master?

I’d say the hardest thing for beginners is controlling the speed. They either throw the puck too fast and it goes all the way out to the end of the board, or it’s too slow and it doesn’t even go halfway down the board. It’s going to take a little practice, getting a feel for how hard or how soft to throw the pucks. 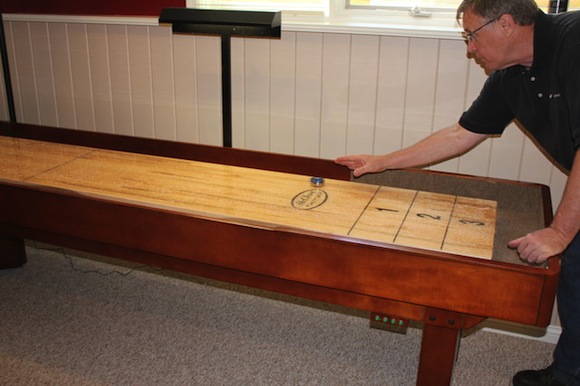 One of the products from McClure Tables

Do you think it’s more advantageous to shoot first or second?

It’s more advantageous to shoot second because that person is the hammer. The hammer is the last person who gets the throw.

The game that people play most commonly in Texas is a game called Knock Off. In Knock Off, only the further-advanced colored pucks score. So if you have two blues on the three line and you have a blue on the two, but you have a red one in front of the blue on the two, the points for the blue puck on the two don’t count.

So if you throw your puck down and you’re at three, then I can throw last, and I can hit your puck and knock it off and I’m going to win. So that’s why the hammer has the advantage.

What is the most successful strategy for the first shot?

And for the final shot?

You want to either outdistance the other player or to knock the opponent’s farthest puck off the board.

What do you love about shuffleboard?

The one thing that I think is most appealing about shuffleboard is the age and sex and skill limitations are not there. And it’s a very friendly game for novices. One of my nieces came over this last weekend and had her kids with her. One was 3 and the other was 4, and they were both down there having a good time on the shuffleboard table.