In the midst of a maze of industrial buildings in East Los Angeles, Dave Hester is standing before a literal mountain of “vaults”—large wooden boxes containing potential “treasures” from repossessed self-storage units. It easily could be the warehouse from “Raiders of the Lost Ark.”

Dave Hester is a storage auction buyer featured on A&E’s ‘Storage Wars’. He is known for his combative style and his famous catchphrase: “YUUUP!” Hester has been a licensed and bonded auctioneer since 1992.

In a few minutes, he’s going to auction off the vaults to the highest bidders. 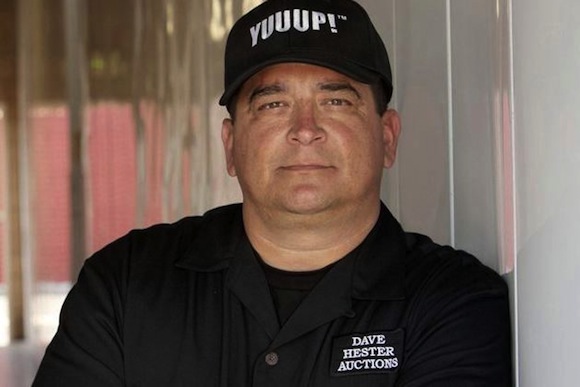 “‘Storage Wars’ made it cool to go out to auctions,” said Hester, who offers auctioneering services through DaveHesterAuctioneer.com. “People are out treasure-hunting now, so it’s a good thing for auctions all over America. We’ve educated a lot of people about the industry. They’ve seen it on TV, and it is popular and in.”

Hester now is locked in a legal battle with cable TV’s A&E Television Networks and production company Original Productions over allegations that he was fired from “Storage Wars” for claiming the reality show is staged.

Dave Hester is a storage auction buyer featured on A&E’s Storage Wars. He is known for his combative style and his famous catchphrase: “YUUUP!” Hester has been a licensed and bonded auctioneer since 1992.

Update: The legal battle was resolved in July 2014, and Hester was set to return to “Storage Wars” in August 2014. To read more about the legal settlement, visit blog.sparefoot.com/6578-dave-hester-returning-to-storage-wars.

The show—depicting “modern-day treasure hunters”—has “captured the public’s interest by combining elements of competition and business strategy with the mystery of discovering what surprises may be found in an abandoned storage unit,” according to court documents filed in the case. “The program … plays off of the old adage, ‘one man’s trash is another man’s treasure.’”

Hester said people enjoy the mystery of guessing which up-for-auction storage unit might contain the next “gold mine.” Hester has been in the auction industry for 27 years; he once bought a rare painting for $750 and sold it for $155,000.

“There have been bigger finds than I’ve had and there have been smaller finds, but that’s what keeps people in business,” Hester said. “It’s like gold mining. A guy can find a $100 nugget or he can find a $1 million nugget—and there are nuggets of all shapes, sizes and forms.”

For me, it was hard to soar with the eagles when I was constantly surrounded by turkeys.
— Former “Storage Wars” star Dave Hester

After wrapping up an interview with The SpareFoot Blog, Hester laid down the rules for the few dozen bidders gathered for this storage auction: cash only, plus a 10 percent buyer’s premium and payment of sales tax for anyone without a reseller’s license.

After the auction, bid winners had positive things to say about Hester’s professional demeanor, fairness and upbeat attitude.

Meastas, a schoolteacher, attends storage auctions to make a bit of money on the side. He’s never found anything like a $155,000 painting, but an assortment of jewelry, rings, watches, air-conditioning units, refrigerators and other finds have resulted in some decent profit. At the Hester auction, he spent $200 for a vault of unknown items, many of them wrapped in blankets or plastic.

“It’s a lot of work because you have to box them up and ship them out on eBay or go to swap meets,” Meastas said. “You’ve got to clean them out. There are a lot of steps involved. It’s not just the bidding here. It’s hauling it, too. I’ve got a little truck.”

South El Monte, CA, resident Cesar Galvez owns ‘Make me N Offer’, which sells merchandise purchased at auctions and elsewhere. Galvez regularly attends these types of auctions for his business. Over the years, he’s come across several treasures, including a New York Yankees picture from the 1960s.

Galvez said he’s purchased items at previous Hester-run actions “and made quite a bit of money.”

The son of a military man and train collector, Hester was born at the Camp Pendleton Marine Corps base near Oceanside, CA, and grew up around antiques and collectibles. He often attended auctions, estate sales and garage sales with his parents, who bought items of value to supplement their income. At age 14, he began attending auctions himself—buying machinery and tools to sell to military-base shops in Orange County, CA.

“I just kind of grew up in the business with my father buying and selling,” Hester said. “So I’ve been around auctions, swap meets and garage sales since I was 5 years old.”

He attended his first storage auction in 1986. In the early 1990s, he worked as a bid catcher—someone who relays bids to an auctioneer—and as an auctioneer. Eventually, he bought and sold millions of dollars worth of merchandise a year. More recently, he owned Newport Consignment Gallery and the Rags to Riches thrift store in Costa Mesa, CA, both of which he sold.

The War Over ‘Storage Wars’

In 2010, Hester was offered a role on “Storage Wars,” a popular reality show that during its second season became the most-watched program in A&E history.

“I guess they picked me for my charming personality,” Hester said. “I did three seasons, and I think they’ve done one season after that. For me, it was hard to soar with the eagles when I was constantly surrounded by turkeys.”

Things went south in 2012, when A&E executives banned him from the series. In December of that year, Hester filed a wrongful termination lawsuit against A&E and Original Productions, alleging unfair business practices. Hester claimed he was fired after he complained that storage units were being “salted” with valuable items that would be discovered by the winning bidder, according to court records.

“After AETN complained about plaintiff’s improper use of AETN’s trademarks, and concurrently with plaintiff’s demand to renegotiate his agreement to participate in the program, plaintiff suddenly raised ‘concerns’ about the program’s authenticity,” attorneys for A&E and Original Productions wrote in court documents. “Original and AETN opposed Hester’s demands for more favorable contract terms, and he was notified that his participation was no longer needed in the program.”

Part of the lawsuit was dismissed in March 2013. A judge ordered Hester to cough up $122,000 in legal fees, but Hester refused to pay, according to court documents. In October, Hester’s attorney, Marty Singer, told Radar Online that he wants to take the case to trial.

Los Angeles attorney Kelli Sager, who represents A&E, declined to comment on the case. Singer could not be reached for comment.

As he awaits the outcome of the legal fight, Hester is offering auctioneering services for a variety of merchandise, including antiques and collectibles, art, audio equipment, commercial and industrial inventory, musical instruments, new and used home furniture, restaurant equipment and sporting goods.

Hester said that what sets him apart from other auctioneers is that when he looks at an item or an entire inventory, he knows the current market value, related expenses and logistics. A lot of auctioneers who handle sales for moving and storage companies don’t know the values of the items that they’re selling, Hester said.

“I spent 10 years buying out of homes, strictly buying estates, or a house a lot of times, so when a vault is being sold, I know the value of it,” Hester said. “If there is a Steinway piano in there, I know if it’s a $10,000 or a $15,000 piano. If it’s a pool table, I know the value of it. If it’s a bedroom set based on a brand name, I know the value so I can talk about it and I can generate more money for the owner of the facility, whereas 95 percent of the auctioneers out there don’t have a clue what they’re selling.”

In the post-“Storage Wars” era, Hester said he’d like to become a “gypsy auctioneer.”

“My ultimate goal would be to have an auction at least once a day anywhere in California or the western United States,” Hester said. “I’d like to buy a motor home—and not even have a home address anymore—and just travel from one town to the next and be a gypsy auctioneer.”