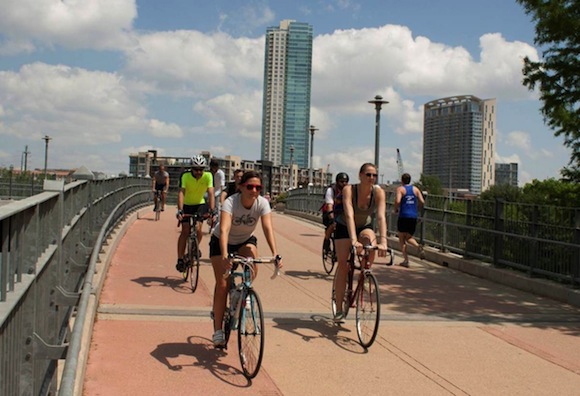 Austin repeatedly has been named one of the most bike-friendly cities in the U.S. by everyone from CNN to The Huffington Post, and for good reason. With a vibrant bike culture, huge student population, and citywide dedication to health and fitness, it’s hard for the average Austinite to resist the hundreds of spinning wheels that pass them by every day.

(See the link to our cycling infographic at the bottom of this blog post.)

May is National Bike Month, a tradition sponsored by the League of American Bicyclists. In true SpareFoot fashion, we’ve decided to kick it up a notch with a “friendly” Bike Month challenge. This year, participants are paying homage to their gold-bloodedness, going above and beyond to ride the most miles and contribute enough blood, sweat and handlebar callouses to deserve the title of SpareFoot Bike Month Champion.

According to the League of American Bicyclists, bicycle commuting in Austin increased by 102 percent from 2000 to 2011, making it one of the most bikeable cities in the U.S. today.

It’s no secret that Austinities love to bike, with a full calendar of biking events and weekly rides every month and incentives like Bike-To-Eat week, where diner/cyclists get 10 percent off at participating Austin restaurants. Even with the onslaught of 100-degree weather during the summer, Austinites commute by bike four times more often than the national average. New figures from the U.S. Census Bureau show 1.5 percent of Austin commuters bike to and from work.

But as much as we’d to think it’s not so, Austin can’t lay claim to being the only bike-friendly city in the U.S. In honor of National Bike Month, we’ve put together a cool interactive infographic listing the top eight U.S. cities for cyclists, and you can be sure that Austin made the cut. Find out which other places made the list of the top cities for cyclists by visiting blog.sparefoot.com/eight-best-cities-for-cyclists.