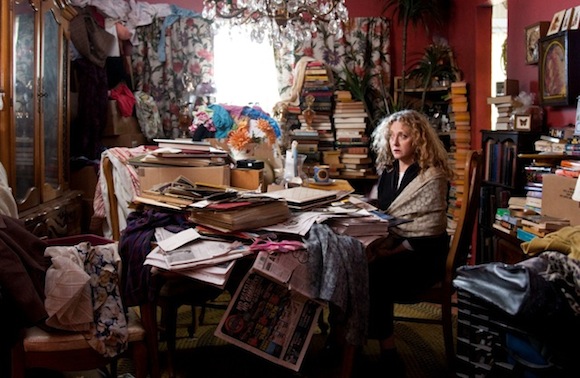 Forget “Godzilla.” The scariest film of the summer season could be an indie prizewinner called “Clutter.”

Where “Clutter” lacks a giant fire-breathing reptile that rezones San Francisco, it more than compensates with a mightily unhinged matriarch named Linda, played by Carol Kane, whose hoarding disorder has left her three grown children in various states of emotional disarray.

“Clutter” carries plenty of star power. Actors in the movie include Kathy Najimy (“Sister Act”), Natasha Lyonne (“Orange Is the New Black”), Joshua Leonard (“The Blair Witch Project”) and Dan Hedaya (“Cheers”). But arguably the film’s most widely recognized face is producer and screenwriter Paul Marcarelli, better known as the “Can you hear me now?” guy from Verizon commercials.

Make no mistake: “Clutter” is a disaster film. It’s just that most of the rubble is of the interior variety. Its tagline puts it best: “Everyone is buried under something.” The SpareFoot Blog chatted with Marcarelli about “Clutter” and clutter.

How did you come up with the concept of “Clutter”?

I went away to write a film about a home stager in a beleaguered housing market, and I came back with a film about a compulsive hoarder and her complicated relationships with her grown children, one of whom is a home stager in a beleaguered housing market. I was thinking a lot about where we are right now as a culture to have such an interest in the hoarding disorder. I think it’s because, as a culture, we’re looking at the mess we find ourselves in and are trying to figure out a way to get ourselves out. 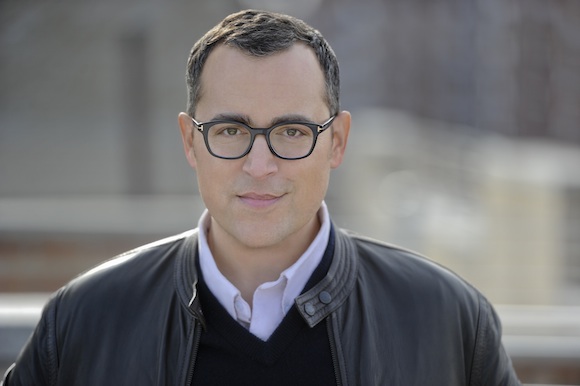 Paul Marcarelli was the producer and screenwriter for “Clutter.”

Do you know any hoarders?

No. My personal connection to the story came when my 93-year-old grandmother passed away. I had the privilege to be with her when she passed, and the curious thing for me was, I did not feel compelled to possess something that once belonged to her. I think it had to do with this moment that we shared as she crossed from one life into another. I noticed that that was not necessarily the case with family members who didn’t have that moment. Our relationship to stuff and imbuing things with meaning that they don’t necessarily possess was really my way into the film.

Hollywood tends to treat the kick-the-bucket premise in just the opposite way—as a comedic money grab among greedy heirs.

Yeah, it’s a different focus. In the film, the words that her son Charlie (Leonard) uses to describe his mother’s disorder is that, for her, “letting one thing go is like letting everything go.” I think we all imbue things with meaning that they don’t necessarily possess. It’s a way of helping us create order from chaos and make sense of this great mystery that is life.

Outside Linda’s home, a small crowd is gathered in lawn chairs, praying to an image of the Blessed Virgin on her garage door. Where did that idea come from?

For me, it was that the madness that was within could no longer be contained by the walls of the house—it’s now bleeding out, and the secret can no longer be kept anymore. 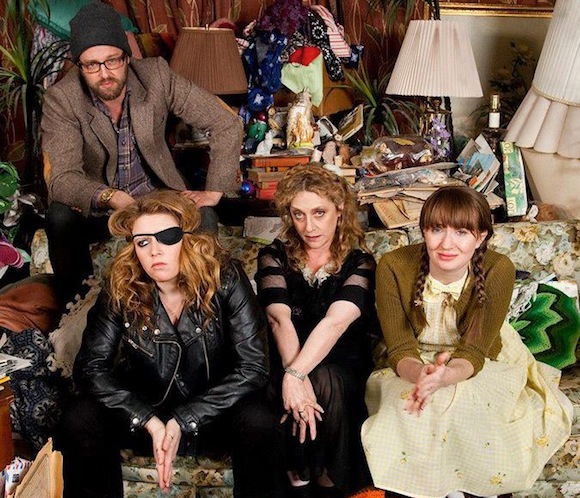 The mother of “Clutter” (Carol Kane, center) and her three children.

Yes, in some ways, each represents a choice we all have to make when reckoning with our families of origin as we find our place in the world. We each make a decision to see and be seen, to be heard and speak up for ourselves, and then, as Charlie does, find a way to transform our experiences into something that we can live with.

They’re also wrestling with the possibility that they could wind up like their mother.

Hoarding was drawn out with its own diagnosis this year in the DSM-V (Diagnostic and Statistical Manual of Mental Disorders). Scientists recently discovered a genetic link, a chromosomal defect in the brains of hoarders. It takes some kind of traumatizing incident to trigger the behavior. 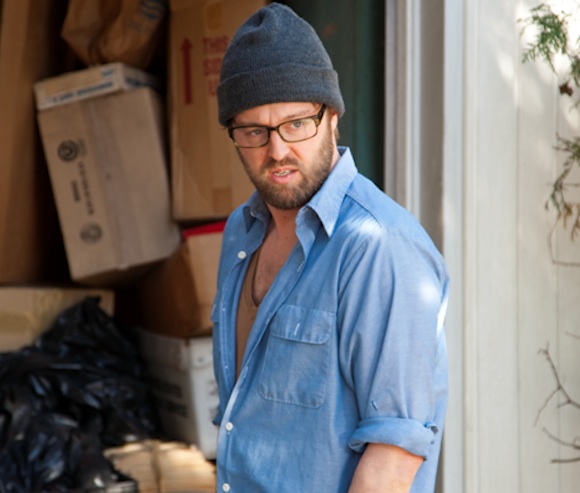 Joshua Leonard portrays the son in the “Clutter” family.

The centerpiece family dinner scene in particular is horrifyingly real.

That’s the great thing about a movie. You can write a scene where the characters say something that you wish you had said! The actors created a unique family constellation where each one of them knew what their characters wanted, and seemingly all of those objectives are at odds. But the reality is, you see that this is a family that ultimately believes in the family unit—each one of them does—and will fight for it.

Did you come away from “Clutter” with a new perspective on hoarding?

Hoarding has always been dismissed as a dirty secret; it’s “that house” on the block. When I was growing up, people would refer to hoarders as packrats or bad housekeepers, like there is some kind of moral failure. I think in some ways, each one of us has a corner of our closet or a junk drawer or a garage or basement that needs to be addressed, figuratively as well as literally.

There’s something about the disorder that feels like an outward manifestation of our own lack of control, and it’s easy to stigmatize that manifestation because it separates us and our own tendencies from it. I think identifying it as its own diagnosis is certainly a step in the right direction. The attention that is now being paid to hoarding in the popular culture can only help to lift the stigma.

“Clutter” is available from Amazon and iTunes, as well as on demand from local cable TV providers.

How to Store Your Wedding Dress for Years to Come

What You Need to Know About Moving Over the Holidays

Parents Reveal The Most Popular Hiding Spaces For Christmas Gifts

New Bundle of Joy? Here’s How to Prepare Your Home For a Baby

How to Invest in Self Storage Real Estate