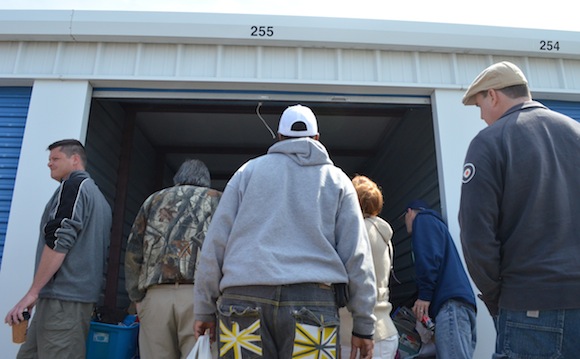 Patty Maddox rolled up the blue metal door of the storage unit. Sunlight washed over the piles of disorganized stuff she had just purchased for $120 at this morning’s auction. A wooden dresser. Patio furniture. An old VHS player. A pair of brown work boots. Tupperware bins. Gym bags. And boxes. Lots of boxes.

“It was the boxes that interested me,” Maddox said as she began rifling through the personal belongings left more than two months earlier by a delinquent tenant. “I was hoping they’d have something interesting in them.”

We do this to try to make a little extra money.
— Auction bidder Patty Maddox

First, she opened the stereo-receiver box, and, to her delight, the original was still inside. Encouraged by the discovery, she then moved on to the Nintendo Wii and Sega Genesis boxes. Both were empty.

That, in a nutshell, is the essence of a typical self-storage auction. Bidders observe a unit from the outside and take a gamble on what they can (and cannot) see. By now, Maddox is used to the ebb and flow of victory and defeat.

Over the past several months, she and her husband have attended dozens of auctions like this one at Buena Self Storage in Buena, NJ. Averaging about three or four auctions a week, Maddox and her husband sell what they can on Craigslist or at local flea markets. And while reality TV shows like “Storage Wars”may foster the impression that storage auctions are a get-rich-quick scheme, the true reality often is more closely related to financial necessity. 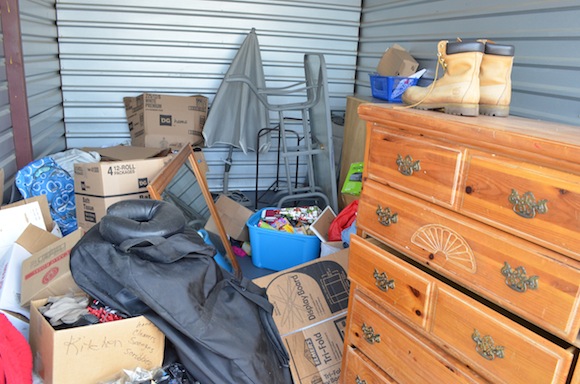 Patty Maddox bought the contents of this storage unit.

“I lost my job awhile back. And my husband is disabled. So we do this to try to make a little extra money,” Maddox said. “Plus, we’re drawn to the curiosity. People start bidding, your adrenaline gets going, you see some interesting things inside, and you get swept away in it all. But it’s always hit-or-miss.”

Standing back and surveying the unit’s contents, Maddox mused that she probably could get $100 for the patio furniture. Maybe $20 for a Cuisinart ice cream maker still in its box. The stereo receiver might fetch a pretty penny. And the VHS player? Perhaps $10.

“This is the chance you take,” Maddox said. She and her husband were among about 20 people who showed up that Friday morning in late April to bid on seven units that were up for auction. “Now, we move on to the next one.”

It all began at 11 a.m. as auctioneer Doug Adams stood in front of a 5×5 unit on Buena’s outdoor lot, opened the door and revealed just three small cardboard boxes scattered around the floor.

Launching into the fast-paced flurry of words that is the signature of auctioneers everywhere (“Do I hear 10 dollars? Tendollarstendollarstendollars…”), Adams conducted the morning’s first sale in less than two minutes, eventually awarding the contents to one of the bidders for a mere $5.

After that, Adams quickly moved from one unit to the next, each time repeating the same ritual: Open the door, give the bidders a minute or two to look at the contents from the outside, and then start the bidding. 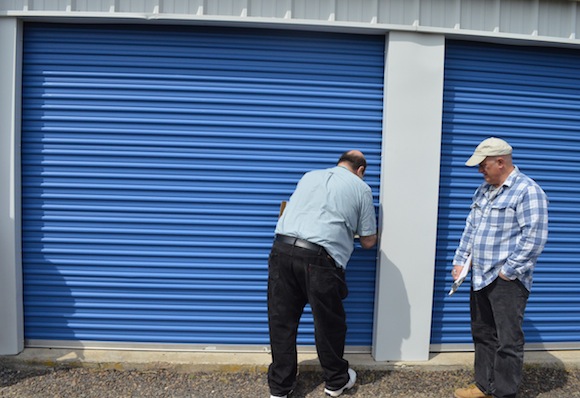 A manager unlocks a storage unit for auctioneer Doug Adams.

Around 11:30, Adams opened the door to the largest unit of the morning, a 10×30 piled high with a home’s worth of assorted contents. Antique dressers, old picture frames, lamps, and countless boxes and bins filled with items that would remain a mystery until purchased. This unit generated more excitement than any other; the bidders eagerly crowded around the doorway trying to gauge the value of what was inside.

“It’s gonna be a lot of work,” someone uttered. “But it looks like a lot of nice stuff.”

After about a minute of wide-eyed gawking from the bidders, Adams stood in front of the entryway and said, “Nice big unit folks. A moneymaker. How about five hundred to start?”

You really have no clue what you’re getting into. No clue.
— Auction bidder David Peck

Someone offered $200. Then $500. Then $600. Back and forth, the bidding bounced like a ping-pong ball between two particular bidders until the price stalled at $925. Adams tried to bump it to $1,000, but in the end, the unit was awarded to a local man named David Peck for $975, the morning’s highest price tag.

“I assume I did well, but you never know,” Peck said. “My wife saw some things she liked. Old furniture and antiques. But you really have no clue what you’re getting into. No clue.”

‘A Way to Pass the Time’

Since December, Peck and his wife have attended at least half a dozen local storage auctions “as a way to pass the time,” sorting through their bounty and then selling the stuff online. This is the largest unit he’s ever purchased. He had until Monday to clean it out; otherwise, he would lose a $50 deposit.

Later that afternoon, as he and his wife hastily sorted through some of the unit’s most easily accessible contents, the Pecks unearthed an array of abandoned possessions. They included everything from “Star Trek: The Next Generation” action figures to dishware, stamp collections, World War II ration cards, and an old top hat still in its original box. 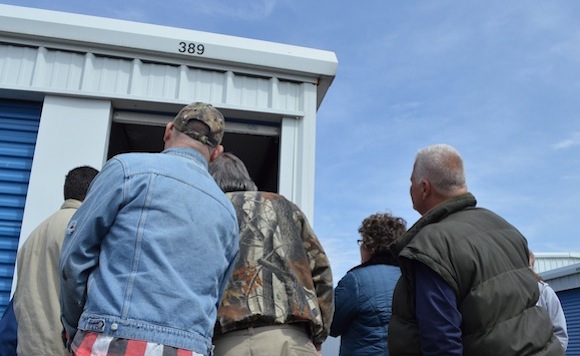 “That unit looked like it hadn’t been picked through at all, which is why it went for so much,” Adams said later that afternoon. “It looked like the contents of someone’s attic and basement all in one big unit. That’s what you call a truly defaulted unit.”

Adams, who’s been conducting auctions for more than a decade, said most storage units that come up for auction already have been picked over by the tenant, who’s usually in a hurry to gather the belongings he wants to keep and leaves the rest behind.

A few years ago, when the reality shows started cropping up, you had four times as many people at these auctions.
— Storage auctioneer Doug Adams

“When you see a unit with just a few things inside, that usually means the tenant took the good stuff and left the trash behind,” Adams said. “But no matter how worthless that stuff may seem, the facility is legally obligated to go through this process. And trust me, it’s always better for the facility if the tenant just pays his bill.”

Despite the excitement that’s been generated by shows like “Storage Wars,” storage auctions are a hassle for facility owners and managers—and rarely are they a significant windfall for bidders.

“Most of the people that were here today are supplying their used-furniture stores or their flea-market inventory,” Adams said. “A few years ago, when the reality shows started cropping up, you had four times as many people at these auctions, all thinking they’d find gold or jewels or something. But that’s not what this is about. The regular buyers are here because they need to be here.”

And the facility holds the auction because it must hold the auction. According to Mike Zona, who oversees Buena Self Storage as well as two nearby storage facilities, auctions are an absolute last resort for any facility, and the process is tedious and time-consuming. 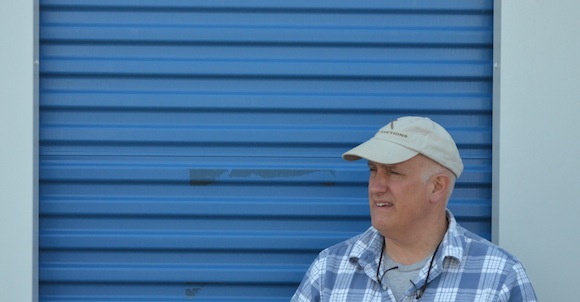 “The regular buyers are here because they need to be here,” Doug Adams says.

Here’s how it works at Buena Self Storage: Once a tenant is 31 days behind on his or her monthly payment, the facility sends a certified letter stating that the unit is in default and will go to auction if the bill isn’t paid within a specified amount of time (usually another 30 days). If the bill goes unpaid, the facility then must advertise the sale of the unit’s contents once a week for two consecutive weeks in a local newspaper. These ads include a general description of the unit’s contents, the address of the facility, the unit number, and the date and location of the auction. And while he’s not required to do so, Zona calls the tenant one last time on the morning of the auction to offer one last chance to pay the bill.

Auctions are something that we’re obligated to do, but there’s really nothing glamorous or profitable about them.
— Storage manager Mike Zona

“Even once the tenant is a month behind on his payment, it’s still another six weeks before the auction takes place. It’s quite a long process,” Zolna said. “Even if the unit is filled with one empty box, we still have to go through the entire process, and the downside is that the unit is tied up for more than two months. That’s two months that we’re not making any money on it.”

What’s more, if a unit sells for more than what the tenant owed, the facility is legally obligated to refund the difference, at least under New Jersey law.

“Auctions are something that we’re obligated to do, but there’s really nothing glamorous or profitable about them,” Zolna said. “And it’s actually a little sad, because for whatever reason, these tenants got behind on their bill and may have lost some valuable stuff.” 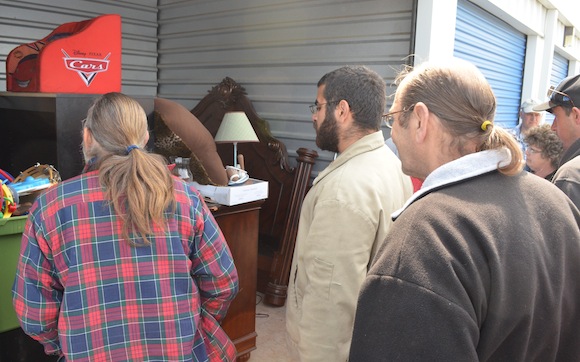 Auctiongoers get a close look at the contents of a storage unit.

Back on the lot, “Big John” Henry sorted through the contents of a 5×10 unit he’d secured for $120. Children’s toys. An old mattress. Bins filled with DVDs and board games. Henry is an auction regular who buys units and sells the contents at flea markets. He’s been doing it for more than three years now.

In that time, Henry said he’s unearthed some unusual items, including a motorcycle, two urns containing human ashes and $3,700 in silver dollars. But those are the outliers. More often than not, the units he wins are just like the one he was combing through at Buena Self Storage this Friday afternoon.

“It’s one-quarter skill and three-quarters gambling,” Henry said. “But you keep doing it because you never know what you’re gonna find.”