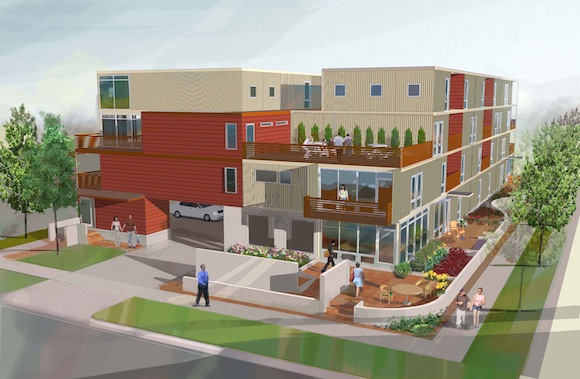 Leslie Horn realizes it sounds nuts. The CEO of San Diego-based developer Three Squared plans to transform 93 of those hulking overseas shipping containers into the first container-built condo complex in the U.S. Construction on the four-story, 20-unit Rosa Parks project (artist’s rendering at top) is set to start this fall near Wayne State University in downtown Detroit.

Horn said “cargotecture” cuts housing construction costs in half; trumps traditional construction for strength, durability and versatility; and offers recycling for millions of steel cargo containers that arrive at U.S. ports each year. The SpareFoot Blog talked with Horn about the advantages and challenges of living spaces made from shipping containers.

What prompted you to get into cargotecture?

It’s time we do it. Here in America, we can send people to the moon and bring them back, but we can’t build a commercial or residential structure that is built to last for more than 40 years and be energy-efficient. The commercial construction industry has not changed in a hundred years. It befuddles me; it boggles my mind.

Most of us can’t imagine living in modified steel cans. What’s it like?

It’s like living or working in any other space, only different. It’s probably going to be cooler. On the inside, you can really create whatever interior you want; you can clad it out and do your drywall and all of those really cool things. But some of the materials that our team has put together and patented are specifically developed for shipping container construction. They address what has been a big problem, which is using traditional housing and construction methodologies within a closed steel frame. That part hasn’t worked so well. 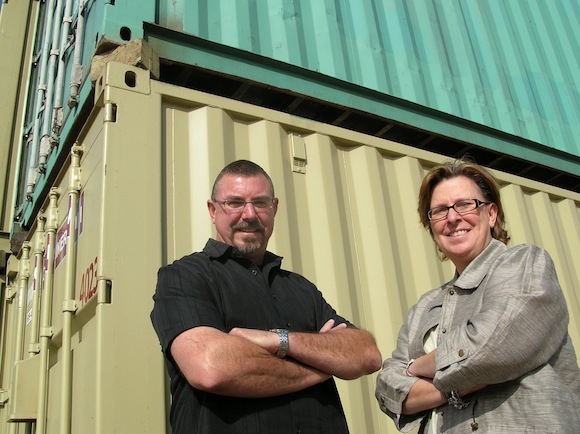 The big issue with climate control and shipping containers is the condensation that comes with steel, which obviously has a lot more heat transference. That was one of our first challenges: How do you keep it from sweating when it’s hot inside and cold outside, or the reverse? We’ve managed to mitigate it through different coatings and insulations. The benefit is, by monitoring that, you can really reduce the amount of energy that it takes to heat or cool the place; you’re not utilizing your traditional HVAC systems by doing so.

There are some places in the United States where just “furring” the containers out and putting in your pink insulation will work just fine. But that won’t work in the majority of places, including Las Vegas and New York City.

There’s something almost childlike about the simplicity of cargotecture.

We have often described ourselves as the love child between IKEA and LEGOs. The only limiting factor with using containers for any type of construction is our imagination.

What are the cost savings over traditional construction?

There are two line items that have very significant cost savings. One is in your hard costs, where you save about 50 percent in your framing costs by using containers. The second savings is in your soft costs, your loans and carrying costs that it takes to build it out. We’re able to cut that also in half, and oftentimes more. Take our Rosa Parks condo project. Instead of taking a year and a half or two years to complete, it’s going to take us less than six months, so you’re actually in revenue [mode] that much faster. 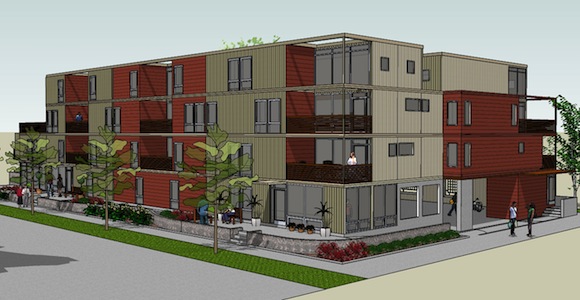 Construction is supposed to start this fall on the Detroit condo project.

Could a self-storage facility experience the same savings with containers?

Absolutely. In fact, we have some of them here in Southern California. You can go three or four high just by adding a staircase. I ran the numbers once, and utilizing containers in storage facilities cuts the payback time on construction from something like 30 or 40 months, depending on the location and site plan.

As long as we have cargo shipping, there is never going to be enough use to repurpose the containers unless we start utilizing them in construction. On average, 20,000 to 23,000 containers arrive every single day in the United States, many of them one-way. Which is why you have a ton of these containers in most ports as well as in places like Phoenix, where lots come in but few ever go out.

Location. There are going to be cities where it would not make sense to ship the containers if the primary goal were to save money, because it’s going to cost a few hundred dollars more to transport them there. So you have to really weigh that out. That being said, in North Dakota, where you have all these van camps cropping up right and left, there is a high demand, so people are shipping in single-unit containers. The oil and gas companies really don’t care about the cost; it’s about how they can house workers safely and treat sewage and all the other infrastructure issues.