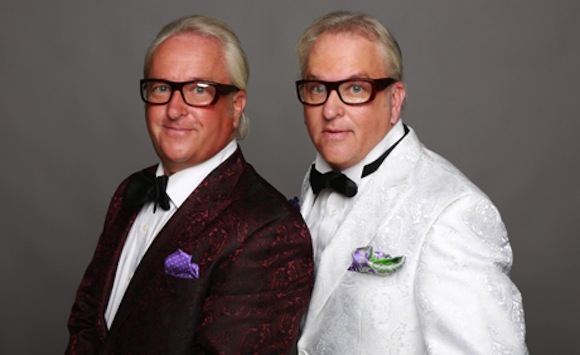 Twin brothers Mark and Matt Harris, appraisal experts who’ve been semi-regular cast members of “Storage Wars,” are starring in their own TV show, “The Harris Brothers’ World Of Wow!” The online show recently debuted on the FirstRun.tv Network. A FirstRun.tv news release says the brothers “have turned into famous pop culture icons.”

Gary Kleinman, executive producer and creator of the show, said: “I remember watching the ‘Storage Wars’ episode where Mark and Matt appeared for the first time. My reaction was, ‘Who are those guys?’ They sure are funny and charismatic. Not only are they identical twins, they have very unique visual style.”

In the Harris brothers’ first “Storage Wars” appearance, they helped cast member Barry Weiss appraise a “Revenge of the Jedi” jacket that was among the auctioned contents of a storage unit. The brothers specialize in appraising Hollywood memorabilia.

‘The Way of the Future’

In the new show, the identical twins take viewers on journeys in search of people, places and things that generate the “wow” factor. In the premiere episode, the Harris brothers explore buildings and architecture in the Los Angeles area, such as Randy’s Donuts and the Walt Disney Concert Hall.

Mark Harris said: “Internet television is truly the way of the future, and the only way you can watch television from your mobile device, computer, laptop, iPad, Android—24/7, anywhere, anytime around the world.”

Aside from “Storage Wars” and their new FirstRun.tv series, the Harris brothers also have a show on LA Talk Radio. Furthermore, they run a business that produces gift bags and gift lounges for celebrity-studded events, and they’ve judged various beauty pageants.