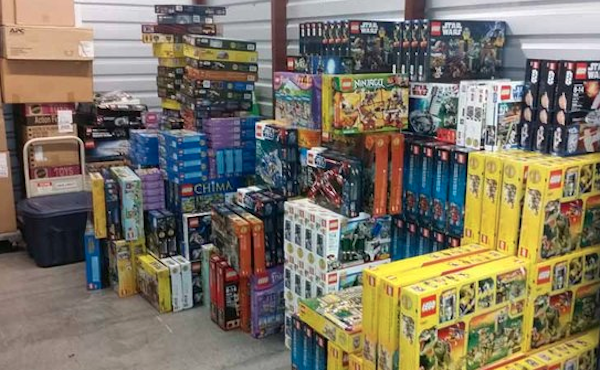 A stash of allegedly stolen LEGOs valued at $200,000 was recovered from a suspect’s garage and storage units in Phoenix as part of an investigation into a local crime ring accused of swiping the plastic building blocks from several Toys “R” Us stores.

The LEGOs were discovered in three 10×10 self-storage units in Phoenix, as well as in the home of local real estate agent Troy Koehler. Police have arrested Koehler and three other people in connection with the alleged scheme, according to azcentral.com.

The investigation began after Toys “R” Us managers alerted police about LEGO play sets being stolen from several stores in the Phoenix area. Police identified the suspects using surveillance video and subsequently began trailing them.

Authorities say they nabbed Koehler near a storage facility as he was buying stolen LEGO sets from suspects Garry Fairbee and Melissa Dailey. Koehler bought the sets for about one-fourth of their value and sold them for much more on auction website eBay, police say.

Also arrested was Tarah Dailey, a cousin of Melissa Dailey.

The Phoenix LEGO ring isn’t an isolated incident. LEGOs are frequent targets for thieves, who can sell sets online at retail price—or for even more if they’re collector sets. According to Vocativ.com, Lego thefts have taken off around the world:

Some go for the toy stores, others rob the delivery trucks. Earlier this year, a suspected band of crooks in Australia brandished angle grinders and crowbars to pilfer at least $30,000 in LEGOs from four different retailers. In England, bandits in Watford Gap and West Yorkshire pulled off LEGO truck heists to the tune of $87,000 and $67,000.”

Vocative.com goes on to chronicle various theft schemes, including one involving Silicon Valley tech executive Thomas Lagenbach, who sold more than $30,000 worth of stolen LEGOs on eBay.