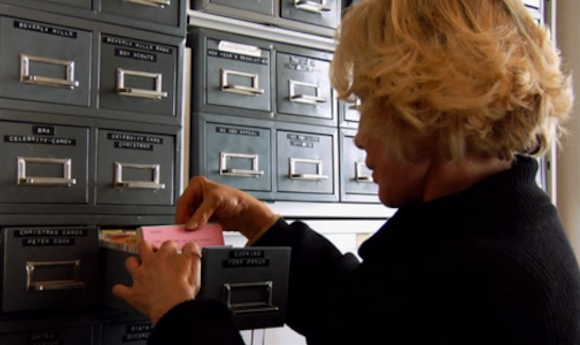 As tributes continue to pour in for Joan Rivers, some are remembering the late comedian’s penchant for methodically filing away the thousands of jokes she’d delivered during a career that spanned more than 50 years. Rivers might very well have been the world’s funniest—and most steadfast—organizer and collector.

Rivers, known for her biting, no-holds-barred humor, died Sept. 4 at age 81. One of the legacies she’s leaving behind is her library-style treasure trove of jokes—a collection that helped Rivers stay on track in the whirlwind business of making people laugh.

I don’t want to hear about putting it on a computer, because if a computer breaks down, you’re screwed.
— Joan Rivers

“People think it comes so easily,” Rivers once said of her comedy repertoire. “They have no idea that what you’re doing is a terrifically difficult thing to do. And I prepare like a crazy lady.”

In 2010, GQ magazine got an exclusive look at her stash of jokes:

There are words that come to mind when you think of Joan Rivers—irreverent, insulting, Botox. Organized doesn’t necessarily pop up on the list, but organized the lady is: For the past thirty-some years, Rivers has been filing each and every joke she’s written (at this point she’s amassed over a million) in a library-esque card cabinet housed in her Upper East Side apartment. The jokes—most typed up on three-by-five cards—are meticulously arranged by subject, which Rivers admits is the hardest part of organizing: “Does this one go under ugly or does it go under dumb?”

That same cabinet of jokes made an appearance in the 2010 documentary “Joan Rivers: A Piece of Work.” As the Wall Street Journal pointed out, the joke cards were divided into categories like “cooking,” “Christmas cards” and “Tony Danza.” 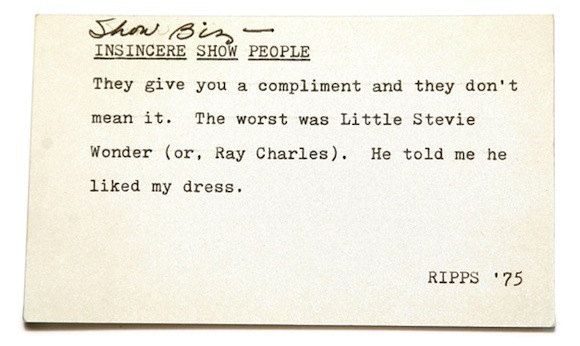 In 2010, GQ published this card from Joan Rivers’ joke catalogue.

“A secretary noted in the files where and when each joke had been delivered so that Ms. Rivers’s act might never appear stale,” according to the Washington Post.

A 2013 profile of Rivers in the Boston Globe noted that despite her embrace of modern technology, the comedian refused to give up her old-fashioned filing system.

“It’s a great reference,” Rivers told the Globe. “I don’t want to hear about putting it on a computer, because if a computer breaks down, you’re screwed. I cannot read [digitally]. I think I was the third person in the world to get a Kindle, and I hated it from the minute I got it.”

Rivers said the joke catalogue represented a “social history of the United States.”

“I’ll be looking through it, and I’ll suddenly find a joke about Jimmy Carter or Billy Carter! So I don’t throw any jokes away even when they’re no longer relevant,” Rivers said last year.

In the GQ story, she quipped—in true Joan Rivers fashion—about what would happen to the joke collection following her death:

“I always say, ‘What are we going to do with these cards when I die?’ And my daughter, Melissa, said, ‘Give them to the Smithsonian, they take anything.’ Anything. And they’re not allowed to sell!”