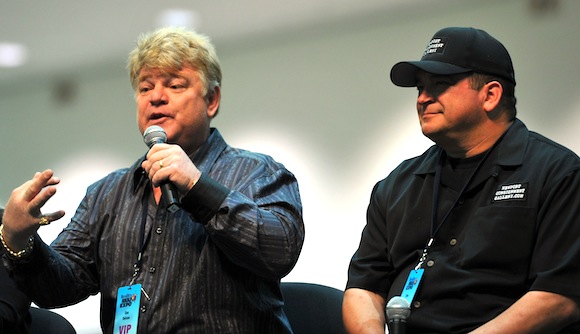 It’s not just fans of the A&E reality show “Storage Wars” who love to hate cast member Dave Hester. Another star of the show, Dan Dotson, can’t stand the belligerent buyer either.

“Dave is definitely a villain,” Dotson (at left in top photo) told The SpareFoot Blog.

After two seasons away, Hester (at right in top photo) returned to the show in August. He had gotten kicked off the series after publicly accusing cable TV network A&E and production company Original Productions of rigging the show. Hester’s lawsuit against A&E and Original Productions was settled in July.

To read our recent interview with Dave Hester, visit blog.sparefoot.com/5933-dave-hesters-life-after-storage-wars.

But the history between Dotson and Hester goes back much further. The two have known each other for almost 30 years after meeting through California’s self-storage auction scene, Dotson said. In fact, they used to be friends. But as demonstrated by a Twitter feud between the two men last year, that friendship has evaporated.

Dotson said he and his wife, Laura, who own an auction company called American Auctioneers, helped get Hester cast on “Storage Wars.” 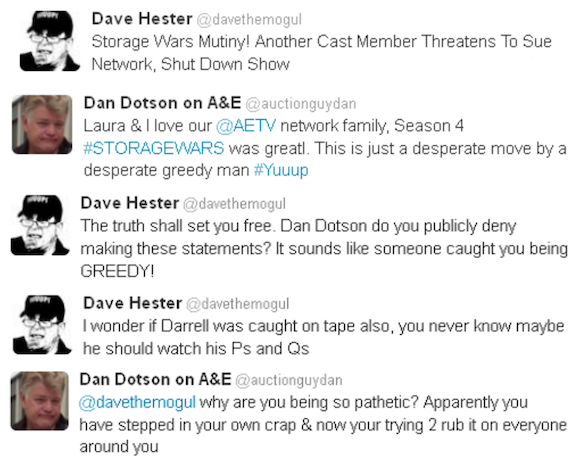 This is part of a Twitter exchange between Dan Dotson and Dave Hester.

To find cast members, the Dotsons each used to drive 250 miles a day, attending auctions throughout California. Every day, Dan and Laura would come back with a list of intriguing people they’d rate from 1 to 10, Dotson said. “Dave kept coming in on both our lists,” he said.

‘Dave Really Crapped on Us’

And that’s how Hester wound up on the show, which now is in its sixth season.

“But Dave wasn’t very thankful for the fact that Laura and I helped get him in front of the eyes of the world and make him a celebrity and make him famous,” Dotson told The SpareFoot Blog.

He added: “Dave really crapped on us. But I’m a very forgiving guy. I don’t forget anything, but God tells us to love our enemies just like he loves us, and so we have to forgive Dave for doing what he’s done.”

Furthermore, Dotson is fine with Hester’s return to the show—as long as Hester follows auction rules, such as not getting physical with other buyers. “We don’t have to be buddies,” Dotson said. “As long as he can mind his P’s and his Q’s, then I’m happy.” 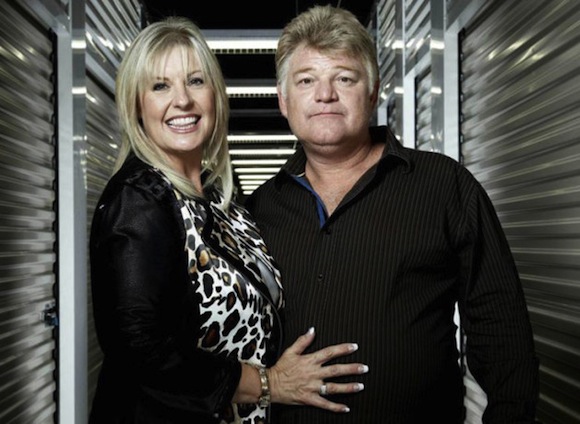 Dan Dotson appears on “Storage Wars” with his wife, Laura.

And if Hester’s antagonistic behavior attracts more viewers to “Storage Wars,” it might even be a good thing, Dotson acknowledged.

“If he’s good for the show and people love to hate him, then I’m OK with him being around, as long as he keeps his mouth shut and doesn’t jack up the competitiveness of my auction and he doesn’t disrespect me and my wife anymore,” Dotson said. “Whatever the fans want, I’m happy.”

If fans keep watching, then A&E and the show’s production company will keep cranking out episodes of “Storage Wars,” said Dotson, who recently was hospitalized after suffering a double brain aneurysm.

“We’re happy to do this for another three, four seasons if we can,” he said.