Those three words, directed at a high volume and often with venom at bands that rehearse at home, gave birth to a niche market: the self-storage unit as rehearsal space.

“Our band spaces are great because they turn something that’s a problem into a solution,” said Lori “Lo” Jablonski, marketing manager at STORExpress Self Storage, which offers more than 80 climate-controlled band rehearsal units at two of its seven facilities in Pittsburgh, PA. “Here, band practice is fun, exciting—and respectable.”

We’ve found that people are so appreciative of the [rehearsal] space that they work really hard to abide by the rules.
— Daryl Henline, manager of Bridge Storage and Art Space

But not all storage units are band-friendly. Elsewhere, the very thought of hosting nocturnal noisemakers is a total buzz kill for storage operators for fear of illegal activities like smoking, drinking and partying.  Finding rehearsal friendly storage units isn’t always easy. Keep reading for tips on finding one, as well as real stories about bands who did. 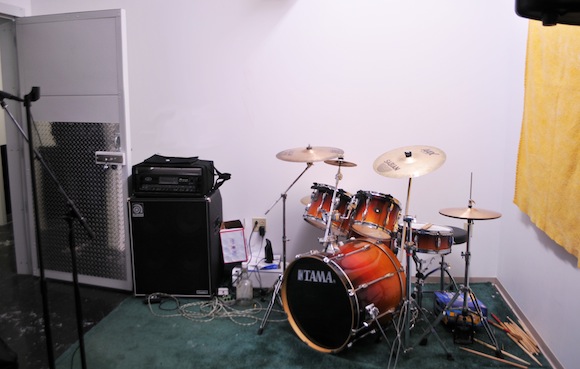 Some storage units are outfitted to accommodate band rehearsals.

So, what does it take to transform “Turn it down!” into “Come on in!”? 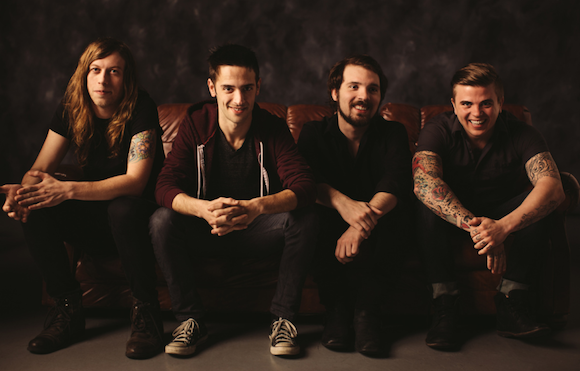 The Composure has rehearsed at STORExpress.

On the bright side, where band space is in demand—as it is at STORExpress’ college-centric Etna and South Side locations and in Bridge’s Bay Area artist scene—units rent at a premium and vacancies are rare.

She insists that the day-to-day reality of interacting with aspiring rock stars is far different than storage skeptics might think. Big names like Rusted Root and rising stars like The Composure have tuned up their tunes at STORExpress.

“The biggest advantage may be revenue, but you also sometimes have these awesome people coming through. Some bands do get big, and it’s pretty interesting to get to know them,” Kadales said.

Henline agreed: “We’ve found that people are so appreciative of the space that they work really hard to abide by the rules.”

At Bridge, those rules include hours (6 a.m. to midnight), parking (parking lot only; no vehicles in driveways or alleys), fire extinguishers, and credit and criminal background checks.

“We just do that because these people are going to be on the property when the front office is closed,” Henline said. “We don’t want any unsavory characters kicking around.”

As for crowd control, Henline said, the size of his 10×25 band units, which rent for $500 a month, pretty much shuts out post-gig partying. “Once they haul in a drum kit and a couple of amplifiers, there’s not any room for an audience,” he said.

The Price of Fame

Cost remains the major obstacle to making units rock-ready. STORExpress built its band units as soundproof, office-like indoor spaces accessible by elevator and a loading dock—certainly no small investment. Band units there rent for $270 to $375 a month.

Bridge chose to retrofit former drive-up exterior spaces by installing soundproof secondary walls and ceilings throughout. The storage operator even came up with a fix for that troublesome roll-up door that, once opened, could transform any given night into a South by Southwest venue.

Before Rusted Root hit it big, members practiced at STORExpress.

Add the expense of tweaking insurance and zoning to cover occupancy, not to mention installing men’s and women’s restrooms, and Henline said he understands why most storage operators avoid band space.

But Jablonski insists that having creative folks around returns the investment ten-fold by helping her marketing go viral. Turn it down? No, turn it up!

“They’re a band, so they’re going to promote where they’re practicing, not only with family and friends but their fans as well,” she says. “That’s great word of mouth.”

Tuning Up in Music City

Across the country at Abbott West Self Storage on the outskirts of Nashville, TN, up-and-coming country stars can focus more on becoming the next Carrie Underwood or Blake Shelton and less on freezing off their guitar-strumming fingers.

Musicians have the choice of six 15×25 music rooms with soundproofed walls, electrical outlets and in-unit heat and air conditioning for a premium price, or a handful of 10×15 units in the climate-controlled main building that rent for a normal price plus a nominal electricity fee to offset those energy-hogging amplifiers.

Facility manager Duncan Earle said he easily could fill twice the number of music units if he had them.

“Being in Nashville, we have a high demand for rehearsal space,” he said. “There are long-term tenants. One of them told me he’s been in and out of our storage space for 10 to 15 years. I’ve been here for two years, and I’ve had one turnover on a music room.”

Earle said he hasn’t had any problems with the on-site partying that sometimes accompanies rock-band tenants, but there’s a logical reason for that.

“With some of these rooms, the bands will put in a mixing board and other equipment to where they fill it up. There may only be room for three or four or five guys to sit in there and play music,” Earle said. “There’s usually not room for any extras.”

“We rented a unit about six months ago that two bands were splitting, and it seemed like every one of them drove individually, to where some of our tenants were not able to get close to their storage units,” he added. “The tenants felt that they should have equal access and we agreed, so we had to speak to the bands and let them know that, unfortunately, some of them were going to have to park on the street.”

“I’ve yet to hear anybody say they don’t like it,” Earle said. “We’ve had tenants say, ‘Oh, yeah, I was here last night and I could hear them playing, and they’re pretty far away from my unit. That’s neat you have music spaces!’”

“Band in a box” storage facilities have been around so long now that some have achieved legendary status.

One such revered jam-band stronghold is Universal Storage Solutions at Woodhill in Columbia, SC. Located near the University of South Carolina campus and a short drive from the bustling Five Points club scene, it’s most famous music tenants were the Grammy Award-winning band Hootie & the Blowfish.

Universal rents out 10 band units in 10×15 or 10×20 configurations that are isolated in its off-site annex down a remote industrial road. There, assistant manager Cam Stewart predicts history may repeat itself with up-and-coming local rock band Atlas Road Crew, which released a five-song self-titled EP on Amazon.com and has a handful of Southern rock music videos on YouTube.

“They got their name because they practice over on Atlas Road where the annex building is located,” he said. “We’ve placed their band sticker above the number of the unit where it all started.”

Stewart doesn’t mind cleaning up what fans occasionally leave behind on his daily rounds of the annex. Besides, the band’s rising star undoubtedly will be good for business.

“We offer U-Haul, too, so if they don’t have a van or tour bus, they can load all that equipment up in a U-Haul,” he said. “We try to be a one-stop shop.”

Finding a good band friendly storage unit is like finding a diamond in the rough. Remember, not all storage companies allow band rehearsal. Check SpareFoot to find storage prices and unit size availability at all storage locations in your area. Contact the self-storage facilities you find directly and ask them if they allow renters to use units as rehearsal space.