One night in February, SpareFooter Storie Cunningham (pictured at top) spotted a video in her Facebook news feed. Intrigued, she clicked on the YouTube video, which tells the story of The Street Store, a charity that helps homeless people around the world. The two-minute video moved Cunningham to tears and moved her to help The Street Store.

The result: From 8 a.m.-5 p.m. April 22 outside Central Presbyterian Church, Cunningham will be organizing the first-ever event in Austin, TX, for The Street Store. Local homeless people will be able to shop for free clothes at the temporary pop-up store. SpareFoot is supporting Cunningham’s initiative.

“The goal is to help bring dignity back into the lives of our homeless population,” Cunningham said, “and hopefully ensure that nobody in this city has to go another day without a shirt on their back or shoes on their feet.” 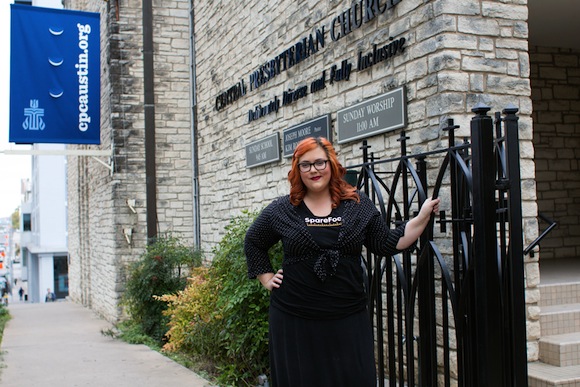 In advance of the April 22 event, Cunningham said she’ll be collecting “lots and lots of clothing donations.” She’s still working on setting up clothing drop-off sites in Austin.

“For many people used to digging in dumpsters for clothes, this will be their first dignified shopping experience,” said Cunningham, a member of SpareFoot’s Amazing Customer Experience (ACE) Team.

For updates on Austin’s first-ever version of The Street Store, check out this special Facebook page.

The Street Store, founded in January 2014, set up its first pop-up shop in Cape Town, South Africa. Since then, more than 150 Street Store events have been held around the world to help clothe homeless people.

“Every city in the world has people who are struggling, but what’s empowering about The Street Store is that anyone, anywhere, can host their own event,” Cunningham said.

For more information about The Street Store, visit thestreetstore.org.