Miami, FL-based Larkspur Acquisitions would like to rework the existing Shopko building at 5300 52nd St., in Kenosha, WI, into a 98,195-square-foot indoor self-storage facility. Its proposed name is Kenosha Self Storage. Preliminary plans call for 600 to 650 units and between 67,000 and 70,000 square feet of rentable space. Shopko closed all of its department stores and spun off its optical businesses in 2019. Also in Kenosha, the Plan Commission gave final approval to Devon Self Storage’s plans for a former Kmart site at 4100 52nd St., with room for 848 climate-controlled units. Source: Kenosha News 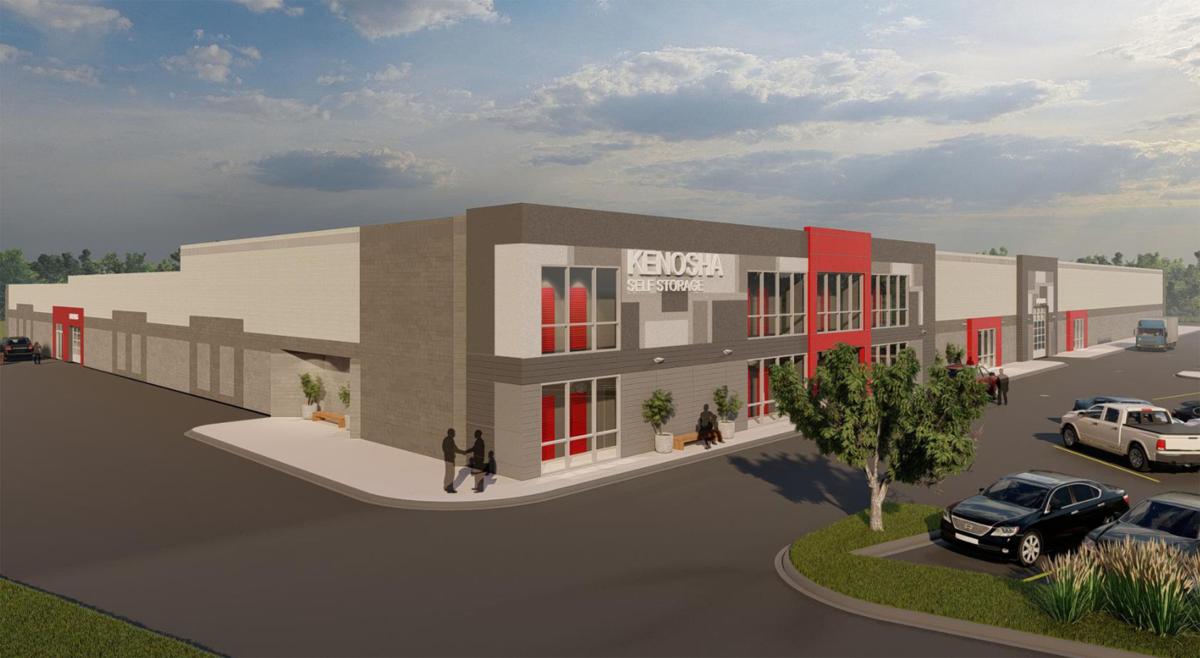 A self-storage facility with more than 180,000 square feet and 6,300 climate-controlled units is in the works now that The Davis Companies purchased adjacent industrial properties at 155 and 165 West 29th St. in Chelsea in Manhattan, NY from the Moshel and Garfinkel families for a total of $62.5 million earlier this year. Santander Bank, N.A. and United Overseas Bank provided financial backing of $84 million during the summer. Construction is scheduled to finish in spring 2023. Cauldwell-Wingate Construction will be the builder. The project development team includes Highland Development Ventures LLC. Source: Real Estate Weekly 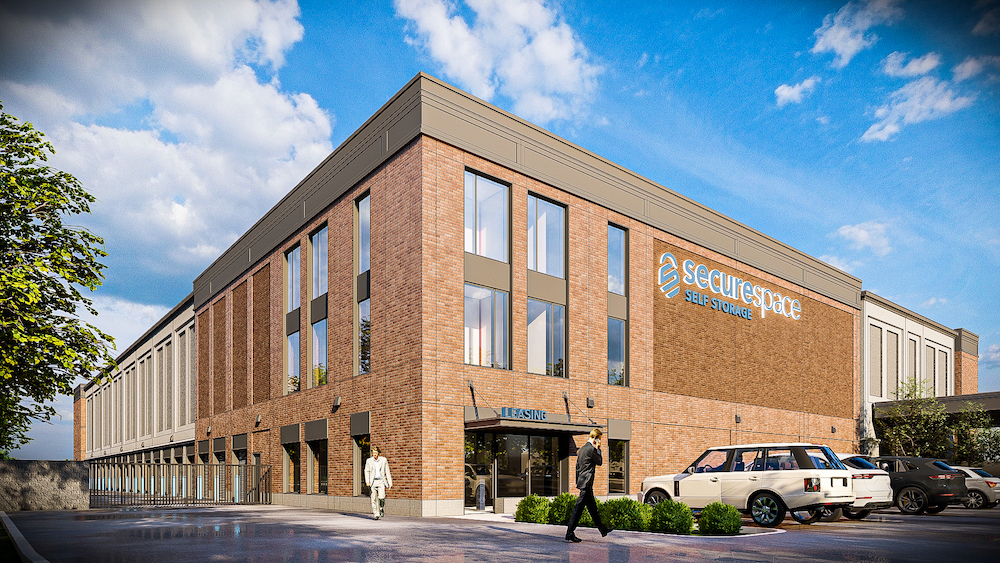 InSite Property Group purchased a 4.5-acre development site in Livingston, NJ. The three-story project (pictured above) will have 97,000 NFSF, more than 1,000 units and 94 covered RV parking spaces. It will have frontage along one of New Jersey’s main arteries, Route 10.

A self-storage complex with a 44,384-square-foot building, a 1,931-square-foot office and 19,800 square feet of covered vehicle storage garages has been proposed for Arkansas Highway 59, across from Siloam Springs Municipal Airport. If approved by the planning commission, it next would go before the city’s board of directors on Nov. 2. Source: Siloam Springs Herald Leader

ExtraSpace Storage hopes to build a self-storage facility with 70,485 square feet of storage space in Beaufort, SC. The Design Review Board voted 2-1 to grant preliminary approval, but the city has said the project must meet 223 specific conditions before final approval is granted. Source: Island Packet

The new owners of West Rock Indoor Sports & Entertainment  Complex at Pralle Lane in Nanuet, NY has asked the Clarkstown Planning Board for preliminary site approval to change the property into a self-storage operation. Stephen Matri Jr. of 21 Pralle Owner LLC of Port Chester, NY, is the applicant. He wants to build a mezzanine level within the two large metal buildings, which would add a second level of about 70,000 square feet. He also wants to demolish a connector building and rebuild a fully enclosed interior loading area to service both of the metal buildings. Matri Jr. is a principal of The Renatus Group of Greenwich, CT. Source: Rockland County Business Journal

Arizona Self Storage plans to build a new facility in Peoria, AZ, and recently received an 84-month construction loan for $8.7 million from Integrity Capital LLC in Scottsdale, AZ. It will have 67,329 square feet and 875 units. The property is at the southwest corner of West Oliver Avenue and Loop 101 North Freeway. Integrity Capital, a commercial mortgage broker, has facilitated more than $800 million in transactions. Source: Integrity Capital LLC

A four-story (one below ground), 1,023-unit, 97,860-rentable-square-foot facility is planned in Goleta, CA. Arizona-based 1784 Capital Holdings received a $28.5 million construction loan from White Oak Real Estate Capital. More than 900 units will be climate-controlled. The facility is scheduled to be finished within 16 months. It will be one of six self-storage facilities in a three-mile radius. The owner and developer also is putting up a 1,560-unit building in Bethesda, MD, set to be finished in the second half of 2023. Source: Multi-Housing News

Dallas, TX-based Baranof Holdings plans to build its second complex in Los Angeles, CA, proposing a seven-story, 142,000-square-foot facility with 1,527 units at 1810 Venice Blvd. in Pico Union. It also will have 24 parking units and 30 bicycle parking spots. A one-story, 17,000-square-foot building now is on the Pico Union property, which is owned by Howard Levinson at Hidden Properties.  Source: The Real Deal

Investor Acumen Realty LLC is working with architect Mark Dean of Dean Architects PLLC of Depew, NY to design a 6,600-square-foot self-storage facility with 23 units at 142 Botsford Place in North Buffalo, NY. Expansion also is a possibility. The Buffalo Planning Board will review the project on Oct. 12. Construction would begin by early winter and it would open by summer 2022. Source: Buffalo Business First

Ted Filer bought a former Bon-Ton store of 100,000 square feet at the Great Northern Mall in Clay, NY for $650,000 in July 20 and is turning it into a self-storage facility. He said he’s also building another 10 self-storage projects at vacant mall stores he has purchased around the country, such as Kmart, Sears and Macy’s. The Clay project will have about 850 units. Filer formed Mustard Street Management to operate the facilities. He hopes to open the Clay site within six to eight weeks. The work is three or four months behind schedule because of supply chain interruptions and labor shortages, he said. Source: Syracuse Post-Standard

U-Haul plans to bring a retail and self-storage store to 14703 E. State Road 64 in Bradenton, FL, following its 10-acre purchase of land on Sept. 24. U-Haul Moving & Storage of Lakewood Ranch, scheduled for completion by 2023,will include a four-story building with 100,000-plus square feet. It will hold 700 indoor self-storage rooms, with climate-control options. Source: Yahoo! Finance

The Planning Commission in Springdale, AR approved plans for five warehouse and self-storage complexes by 9-0 votes. Wagon Wheel Storage, 3744 Wagon Wheel Road, plans to add one building with office and warehouse space, and five additional buildings that would hold a combined 120 units. Chad Reed Storage, 570 W. County Line Road, will have more than 110 units in 11 buildings. Greystone Storage, 1790 E. Arkansas 264, will include 250-plus units in nine buildings; the project will include 38,000 square feet of climate-controlled storage and nearly 30,000 square feet of inside storage for boats and recreational vehicles. The commission also approved a rezoning of 3.5 acres at 5324 Elm Springs Road from agricultural to commercial; the owner plans to sell the land to make room for storage units. Source: Arkansas Democrat Gazette

Safeguard wants to build a $10 million facility at the site of former athletic complex F14 Sports in Sayville, NY. But that’s sparked a zoning battle, and the Town of Islip would need to change the zoning from business zone to an industrial zone to accommodate the facility. The Sayville Chamber of Commerce, plus local businesses and some residents, oppose Safeguard’s plans. Stanley Bonilla, senior vice president of Safeguard, said the building has been designed to fit in with area homes and  that he’ll work with the community. Source: News12

U-Haul Moving & Storage of Northgate is operating at a former Kmart store at 255 Northgate Drive and plans to add 700-plus indoor, climate-controlled self-storage rooms to the location in Manteca, CA. The facility has 107,318 square feet. U-Haul bought the property, which comprises 7.95 acres, on Aug. 31.

StorQuest Self Storage opened a three-story facility at 2021 Lakeland Ave. in Ronkonkoma, NY, its 10th store in the state and  207th location nationwide. It’s less than 2 miles from McArthur Airport. Griffco, an Atlanta, GA company, was the builder.

Denver, CO-based Southwestern Property bought the former JCPenney store in the Metrocenter Mall in Phoenix, AZ and  turned it into a climate-controlled self-storage facility for wine, boats and RVs. It has 157,000 square feet. Source: KJZZ 91.5

Stricter rules for self-storage facilities will go into effect when Centerville, OH, lifts a ban on self-storage units on Oct. 13. Those backing new or expanding sites will face new rules for zoning, lot size and where items can be kept. Centerville imposed the moratorium on facilities that take up about 18 acres in two industrial zoning districts. Separately, city staff reviewed the rules in Kettering, Miamisburg and the Cleveland suburb of Parma before revisions were improved. Now, in order to operate, new or growing Centerville self-storage units must be on land that is 3 acres maximum, more than 1,000 feet from another self-storage business, have ample security and more.  Source: Dayton Daily News

The city council in Clanton, AL, voted to prohibit self-storage facilities on Alabama State routes 22 and 145 as well as U.S. Highway 31 and Lake Mitchell Road, within city limits. Existing facilities will be grandfathered in and self-storage will be allowed in the M-1 manufacturing district. Source: The Clanton Advertiser

In Washington State, the Anacortes City Council has placed a six-month moratorium on self-storage facilities in commercial zones. A public hearing on the issue will be held within 60 days. Veterinarian Lance Campbell, new owner of the site of the former San Juan Lanes, talked to the city planning department about the possibility of using the space for a vet clinic, apartments or self-storage. Campbell owns Skagit Mini Storage at 1320 Moore St. in Sedro-Woolley, WA. Source: goanacortes.com