A four-story self-storage building may be coming to the West Kendall area of Miami-Dade County in South Florida. Kendall Investors 172 LLC, based in Coral Gables, FL, filed a pre-application with county officials regarding a 1-acre site at the southeast corner of Southwest 88th Street and Southwest 172nd Avenue, under contract with William Warren Properties of Santa Monica, CA, has the property under contract. The project would have an 85,541-square-foot facility with room for 801 units and 14 parking spaces. The property is just inside the Urban Development Boundary. Kendall Investors 172 LLC also owns an 8.95-acre site to the west that it proposed as a shopping center in 2019; there has been no construction there. Source: South Florida Business Journal

Tamiami Storage LLC has filed a pre-application to build a self-storage facility on 1.24 acres on the west side of Southwest 143rd Avenue, behind a restaurant at 14300 Tamiami Trail in Florida. Mitchell Feldman of Feldman Cos. manages Tamiami Storage and filed the paperwork. The developer has the vacant site under contract from Land One Ltd. of Coral fables, FL. The project calls for a four-story storage facility with 95,470 square feet and 17 parking spaces. Source: South Florida Business Journal

The City Council in Palm Coast, FL voted 4-1 in favor of a rezoning and a special exception that would allow the construction of a Secure Space self-storage facility on the west side of Old Kings Road North with the Town Center Boulevard intersection. It would have 287 covered RV/boat spaces plus 95,500 square feet for units, next to Gold Choice Palm Coast Assisted Living & Memory Care at 3830 Old Kings Road. Source: Palm Coast Observer.com

A self-storage company and a car-wash company have committed to becoming part of the County Seat Crossing commercial development at the northwest corner of Route 113 and Route 9 in Georgetown, MD. A 3.3-acre site is for sale for the site, recommended for an industrial-type flex space or a professional/medical office. Source: Cape Gazette

A groundbreaking will take place in late April or early May in Michigan, and the opening in July or August, for East Bay Plaza Self Storage, with 750 square feet in each of its 25 units. The units are larger than normal, designed to store such items as boats, cars and RVs. It would be located behind the main building at East Bay Plaza. Source: Traverse City Record Eagle

A three-story, climate-controlled Extra Space Storage of 96,600 square feet is planned at 600 Centerpoint Road, San Marcos, TX. Construction is scheduled to start April 1 and completion for Feb. 1, 2023. The project cost is estimated to be $6.7 million. SM Centerpoint Investments LLC is the owner.

A developer hopes to build a self-storage facility plus retail near the Delray Marketplace lifestyle center, on a 9.8-acre site at 8778 Atlantic Ave., west of Delray Beach, FL. It will require votes by the Palm Beach County Planning Commission. Application documents show that development site is under contract to Banyon Development, led by Jason Sher. The application calls for 9,100 square feet of retail, a 3,339-square-foot car wash and up to 193,864 square feet of self-storage, though the developer said they would build only 99,459 square feet of self-storage, with 538 units. Source: South Florida Business Journal

SafeNest Storage opened a new self-storage facility at 7 Roberts Road in Asheville, NC – its third location in Asheville and 13th facility in North Carolina. It has 65,000 square feet and is designed to serve residents of Kenilworth, Biltmore Village and other South Asheville neighborhoods. The units are temperature-controlled. Storage Asset Management will operate the site. 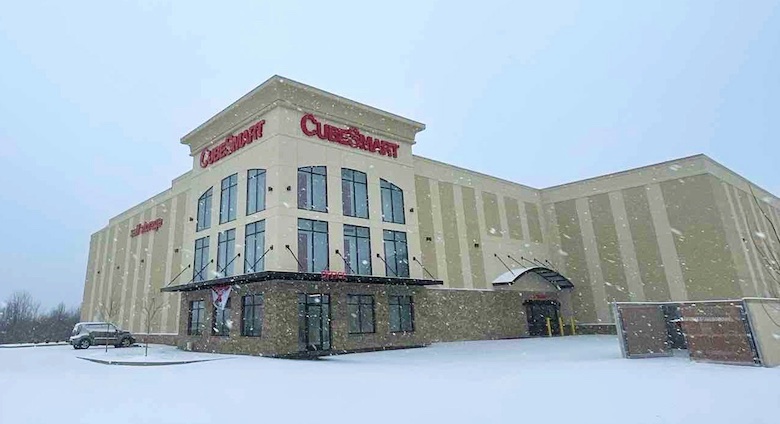 Nicholasville, KY has a new self-storage facility (above). Miller Valentine Construction, in partnership with MV Investment, has opened a climate-controlled CubeSmart facility at 431 E. Brannon Road. It has three stories and 96,600 square feet.

In February, Miller Valentine Construction, in partnership with MV Investment, will start to put up a self-storage facility with climate-controlled units and 105,000 square feet along Raeford Road in Fayetteville, NC. CubeSmart will manage the property, scheduled to open in Q2 2023. Miller Valentine has built or developed more than 100 million square feet of commercial real estate and more than 15,000 multifamily units in more than 25 states.

Miller Valentine also announced that in partnership with MV Investment, it would develop a three-story, climate-controlled, 98,550-square-foot facility along Town Center Road in Calabash, NC. It’s scheduled to open in mid-2023. CubeSmart will manage the property.

The city of Stratford, CT, is considering a moratorium on the construction of self-storage buildings. Mary Dean, Economic and Community Development director, presented the proposal to the Economic Development Commission, saying the town had become saturated with self-storage, and that the town could discuss the next steps to take for a diverse economy. The commission approved the plan, which the Zoning Commission next will consider. The moratorium could go into effect in March. Source: Westport News

The City Council in Maumee, OH, approved a temporary moratorium for self-store projects. Officials will review the city’s building codes and zoning laws. Mayor Rich Carr said there are no active applications for self-storage development or expansions right now. The pause may affect the plans of A+ Self Storage, which planned to buy an adjacent 7 acres at 919 Illinois Ave.