Compass Self Storage reached a total of 100 locations (with 30 of them in Florida) when it opened a new property at 203 Neighborhood Market Road in Orlando, FL. It has more than 81,000 NRSF in a multistory, climate-controlled building that also has drive-up units. The company, based in Cleveland, OH and a member of the Amsdell family of companies, operates self-storage, boat and RV storage centers nationally. Amsdell was founded in 1928 and said it has been “active in several billions of dollars’ worth of real estate ventures with a primary focus on self-storage.” Amsdell has owned and operated more than 500 storage centers under various trade names in more than 27 states. 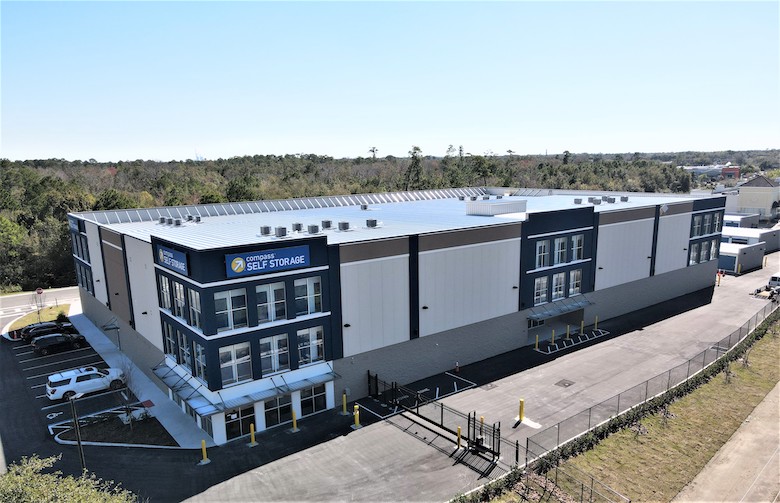 Two more self-storage complexes may be built in Wilmington, NC, pending approval from New Hanover County and the City of Wilmington. One would sit on 5 acres off Sidbury Road and the other would go on a nearly 2-acre Market Street parcel inside city limits, next to an existing storage facility. A zoning request to make the Sidbury Road property eligible for self-storage is underway; right now, the area is zoned for residences. The zoning change would allow 39,000 square feet of indoor self-storage space, and about 1 acre of outdoor RV and boat storage. There would be two one-story buildings. The second project is Market Street Storage, and its 1.9 acres off of Market Street would be between Go Store It Self Storage and Pirate Ship Powersports. Plans call for a three-story building that includes a 900-square-foot office. Source: Port City Daily

A four-story, 90,000-square-foot self-storage facility may be coming to the Ives Estates neighborhood near the Ives Dairy Road exit area of Interstate 95 in Miami, FL. Robert Lansburgh in Miami and Michael Landa in Aventura, who manage Y4L LLC, filed a pre-application with county officials for a 1.94-acre site at 20100 N.E. 15th Court. It already has 26,902 square feet of self-storage warehouses. They were built in 1976. The developer wants to knock down two of the five existing warehouses, then put up the four-story structure. It also would have 12 parking spaces. Lansburgh favors updating the facility because the buildings aren’t air-conditioned and there is demand for self-storage in the area.  Source: South Florida Business Journal

In Florida, the Apopka Area Chamber of Commerce held a ribbon-cutting ceremony for Apopka Self Storage at 2106 Plymouth-Sorrento Road. The facility has nearly 100,000 square feet of storage space, with climate-controlled units, covered outdoor parking for boats and RVs, and U-Haul truck rentals on-site. Source: The Apopka Chief

Schulman Properties is building a self-storage facility at 15699 W. Dixie Highway in Miami, FL, near Florida International University’s Biscayne Bay Campus. Pacific Western Bank provided a $17.84 million loan to Dixie Storage SPE, an affiliate of Las Vegas, NV-based Schulman, for the project, which covers 13.3 acres. The seven-story facility will have 163,600 square feet spread around 1,081 climate-controlled units. The developer bought the vacant property, which is in a federal Opportunity Zone, for $5.25 million in August 2021.  Source: South Florida Business Journal