Investors are still investing steadily in self-storage, although the rates of growth have slowed compared to recent years, according to CBRE’s latest Self-Storage Investor Survey.

The survey found that average absorption time increased to 30 months, an increase of one month from last year’s third quarter. Forty percent of respondents described market conditions as being at equilibrium; 28 percent as under-supplied; and 32 percent as over-supplied.

“It’s not going to be a 25×20 year. It’ll be more like a 10 x 10 year,” he told SpareFoot Storage Beat. “But cap rates have held relatively steady as a lot of people are looking to place capital in the sector.”

As investment in self-storage generally is slowing down, Sonne predicts there will be a decline in sales. He projected about 3 to 5 percent growth on same-store sales.

“We’re still seeing some very high pricing and cap rates are still very stable and close to historic lows,” Sonne said. “People remain relatively confident in the sector despite its having peaked. It’s still considered a safe haven, and much less elastic in the down cycles compared to other sectors. Basically, self-storage is still generally viewed as recession resistant.”

Interestingly, the regions seeing the highest rent growth are actually the more secondary and tertiary markets, according to Sonne, including in New Mexico, Midwestern states such as Ohio, and inland areas of California.

“The core markets have topped out a bit. Growth is still robust compared to other CRE sectors, at around 3.5 percent,” he said. “But a few years ago that rent growth was as high as almost double digits because of revenue enhancement algorithms to raise rents. But some of those tools have now peaked a little bit.”

In particular, the survey noted that respondents are using ten-year hold periods most often for discounted cash flow models that consider both boom and bust cycles. 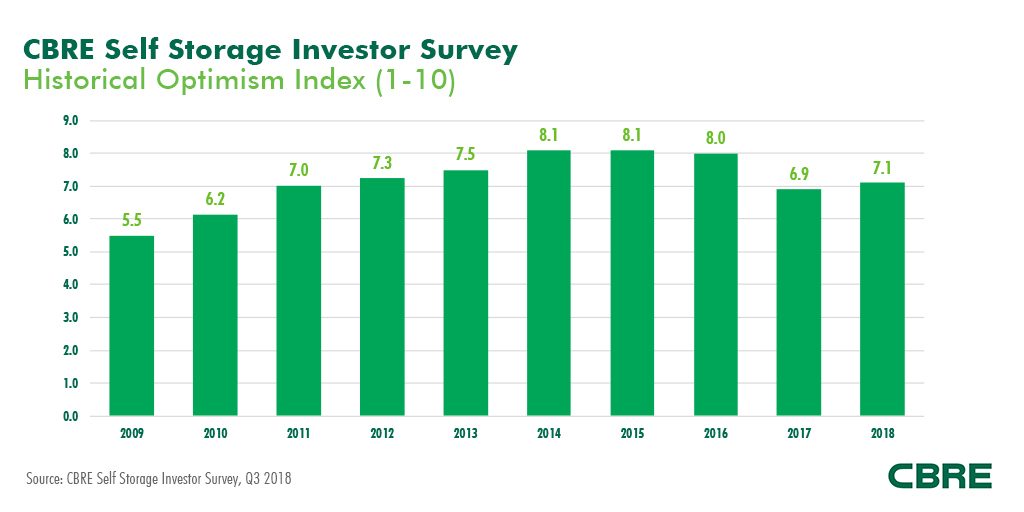 Most respondents thought selling was currently the best strategy, reflecting an optimism index average of 7.1 on a scale of 1 to 10, the second lowest index since 2010, according to the survey. Brokers reported continued sales volume, but some slowing in transactions.

Looking ahead, market sentiment is that cap rates will remain level in the sector with a slight increase of 25 bps or less over the next year due to anticipated interest rate increases, according to CBRE. But respondents seemed concerned about new supply coming to the market.

For his part, Sonne is confident that investment in self-storage will remain sound.

“There’s still a lot of capital coming in,” he said. “But certainly growth is moderating from previous levels.”

As a freelance writer, Mary Ann has written for the San Francisco Business Times, The Network, Venture Capital Journal and Austin Way Magazine. She has previously reported full-time for the Silicon Valley Business Journal and the Houston Business Journal. Mary Ann is currently based in Austin, TX.
Twitter