As this development cycle enters the later stages there are many instances of submarket trade areas where multiple new self-storage projects have been delivered within short-order of each other.

Numerous developer clients that work nationally have raised the question of the impact of these deliveries to their leasing velocity and the timing to attain “economic stabilization” (local market rents at local market occupancies). Having been involved with numerous projects nationally, the opportunity arose to study this in a real world setting on two Northern California projects.

The two charts represent similar sized projects in markets with similar demographic make-ups, with opening dates within several months of each other. 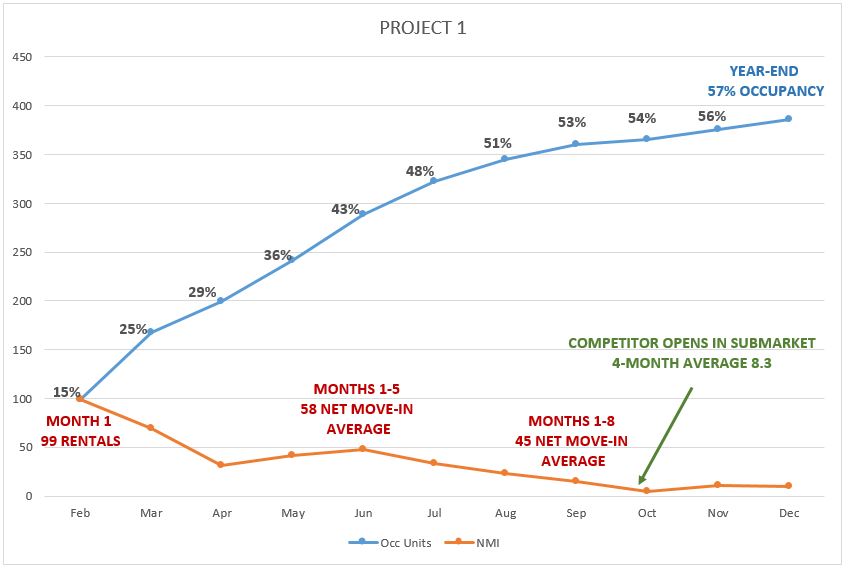 The difference between these projects is that in the top chart a competitive project opened during the eighth month of operation. In the bottom chart no new supply entered the market during the study period. 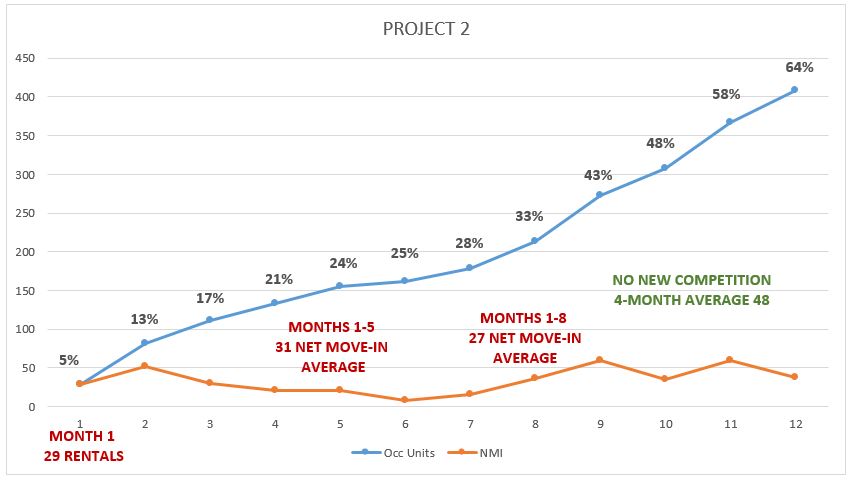 The chart on top represents a project delivered in Q1, 2018 with a competitive project opening during month eight of operations. For the first eight month period this facility had an average NMI (Net Move In’s) of 45 tenants per month.

For the four month period after the competitor opened NMI dropped to 8.3 per month, a drop of 72 percent! As a result occupancy stalled out in the mid-50 percent range, creeping upwards at a snail’s pace even with enhanced marketing efforts. Initial projections were to be at close to 65 percent occupancy by end of year one.

The bottom chart represents a facility that opened during the winter of 2017, typically your slowest lease-up period. This facility got off to a bit slower start, but maintained their pace of leasing throughout the entire 12-month study period, even increasing rentals over the last four months from an 8-month average of 27 to an average of 48 units.

Which is better, the tortoise or the hare?

While hosting a storage owners lunch & learn session recently there was a debate between operators with similar predicaments to the Project 1 above – multiple properties in lease-up – with several of the opinion that it is best to discount rents early-on and remain focused on achieving market occupancy while others were adamant that the best approach was to retain market rents in a more tortoise versus hare approach.

A multi-year study of each approach would be of great benefit to figure which approach is economically superior! In both cases above the operators were holding firm on market rental rates and only offering temporary concessions to attain their desired occupancies.

From an investment standpoint the superior approach would be to increase short-term concessions such as $1 first month’s rent or 50 percent off for first three months; at the end of the promotional period rents would then be at higher market rents versus heavily discounting rents and trying to increase rents to market rates over a period of time.

Bottom line: If a competitor is entering your trade-area you need to increase your marketing budget and take a roll-up-your-sleeves approach to getting your facility filled up and profitable!

Tom de Jong, MBA, SIOR, is Senior Vice President with Colliers International and a member of the Colliers National Self-Storage Group and may be reached at tom.dejong@colliers.com or (408) 282-3829
Website