The valet-storage market in Chicago has gotten a little more crowded.

A technology consultant and property developer in the Windy City have teamed up to start BinSwap, the latest pick-up-and-delivery storage firm to open in Chicago, joining companies such as Blue Crates, MakeSpace and Clutter in mining the emerging niche within the city’s storage industry.

Founded last year, BinSwap already has 28,000 square feet of storage space in three buildings, a van and the full resources of Property Adventures, an office and retail developer in Chicago, at its disposal as it builds out, the company’s co-founders say.

If all goes well, BinSwap hopes to expand to as much as 100,000 square feet of space and ten vans within the next few years, they say.

Angus Frost, a technology sector veteran in the Chicago area, and Alex Pearsall, owner of Property Adventures, say they have no grand plans for a national rollout, preferring instead to focus on the huge Chicago market.

“It’s sort of a labor of love for us at this point,” said Pearsall. “We’ll see where it goes.”

Storage by the foot

The goal is to continue to boot-strap BinSwap with their own money, until the co-owners feel it’s time to seek investors or sell the firm, the two say.

BinSwap is one of many start-up valet storage firms, also variously known as “on demand” and “concierge” storage, across the country.

Valet storage entrepreneurs are convinced their new model is the future of storage, rather than the traditional model of people hauling their belongings themselves to and from storage facilities.

Typically, valet firms charge by the containers or cubic foot, rather than by storage locker space. In the case of BinSwap, they provide customers with 4-cubic-foot plastic bins and charging $7.50 per container per month for storage and pick-up and delivery services. The average customer rents about ten bins per month, says BinSwap’s Frost.

The company charges varying prices for items that don’t fit into bins, such as bicycles and ski equipment, based on their size, he added.

Mike Walker, co-founder of Blue Crates, a valet storage company started in 2015, said BinSwap is just the latest firm to jump into the full service storage industry in Chicago.

“There’s plenty of room for more in this state and city,” Walker said.

Walker, whose company owns 20 vans and employs eight people in the Chicago area, said the new-style storage companies face a number of challenges, not least the fact that most customers still haven’t heard of pick-up-and-delivery storage.

“The new model is something people still have to get used to,” he said. “But we’re confident. It’s catching on.” 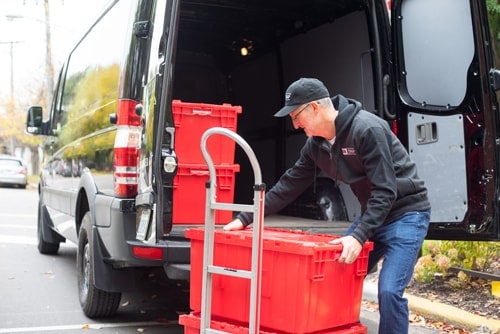 In the case of BinSwap’s Frost and Pearsall, two life-long friends, they came up with the idea for the company after discussing where Frost might store the removable top of his Jeep Wrangler during summer months.

The conversation sparked the question: What do people living in small spaces do with all their seasonable items, such as Christmas decorations, clothes, ski equipment and bicycles?

As others in the valet submarket have noted, many customers instinctively think that pick-up-and-delivery storage must be more expensive than traditional storage.  But Pearsall said the “beauty of the business” is that valet-storage can operate out of secure rented spaces, such as warehouses, rather than owning and maintaining facilities where customers come and go.

In the case of BinSwap, its bins are stored in unused commercial space in some of Property Adventure’s buildings, further cutting BinSwap’s costs. The storage company also uses Property Adventures’ employees and small fleet of trucks to help with BinSwap’s operations, Pearsall said.