Household pet ownership (and specifically dog ownership) is steadily on the rise, and pooches in the Big Peach are no exception.

What is it about Atlanta that makes it such an ideal city to own a dog? Here are four reasons why so many people in this southern metropolis have decided to bring their furry friends to the city with them.

Lucky’s Burgers and Brew, with three Atlanta locations, is named after the owners’ golden retriever. Lucky’s was established “as a local watering hole for patrons and canine alike,” and they boast a menu of items named after a slew of different dog breeds, like the Memphis Bloodhound, the Chihuahua, the Poodle Chasher, the German Shepherd, and the Boxer.

While you are in the #ATL, come see us. Bring the pup. @BenAffleck pic.twitter.com/moQ2EzU9xh

Another unique local favorite is the Bellwoods Social House, an upscale pub in midtown that has a “dog bar” where they serve fresh water and treats to their canine customers.

One of the most popular parks for dog owners is Piedmont Park, a 3-acre park located in the heart of Midtown. A relative newcomer onto the dog scene is the Freedom Barkway, a 2-acre park in the Old Fourth Ward area of town with water stations for both people and their canine companions.

Of course, no article discussing parks in Atlanta would be complete without a mention of the Atlanta Beltline. This 2-mile long pathway winds through the heart of east Atlanta, passing scores of unique shops, restaurants, and boutiques. On a beautiful sunny day, there are few places more popular for dogs to strut than Piedmont Park or the Beltline!

Occasionally the Atlanta Braves baseball team hosts “Bark in the Park,” an evening when dogs are allowed into the stadium during games. Their ticket even comes with a branded Braves leash.

Had so much fun at my 1st @Braves Bark in the Park. Met some new friends & cannot wait to go next year!🐶🐾❤️⚾️ pic.twitter.com/NLT3NhQumb

The Artmore Hotel prides themselves on being particularly pet-friendly. They have a “Bark More” package that clients can purchase, which includes a plush dog bed, doggie toys and bones, and bowls for water and food.

For dogs under 25 pounds, the Mandarin Oriental Hotel pulls out all the stops, greeting Fido with homemade organic biscuits, doggie dental kits, and luxurious dog beds. They even have fancy mocktails and other drinks and food made specifically for their canine customers!

Of course, there’s always room for improvement. A recent study by Zumper found that, although Atlanta made the top 10 most pet-friendly cities in the country, it lagged behind in categories like “play,” due to the minimal amount of public parks.

A study by WalletHub found a similar result – although in their study Atlanta ranked 14th overall in terms of dog-friendliness, it plummets to 66th when looking specifically at outdoor pet-friendly amenities (such as parks).

Even so, it’s clear that Atlanta has developed a well-earned reputation for being dog-friendly, and it doesn’t appear that that trend will be slowing down any time soon. 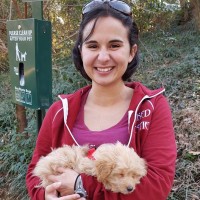 Restless traveler who's settled in Atlanta - for now. Lover of tea and dance and music and words. On a mission to share the adventure of life with the world.
WebsiteTwitter